On Wednesday, Pope Francis tweeted support for the 41st Annual March for Life at the same time that President Obama expressed support for the Supreme Court decision that gave America an unfettered right to abortion, calling it an “historic commitment to protect the health and reproductive freedom of women.”

The Pope announced to his 3 million English language Twitter followers, “I join the March for Life in Washington with my prayers. May God help us respect all life, especially the most vulnerable.”

March organizers did not conduct a crowd count this year but everyone there certainly knew the temperature–brutally, even dangerously cold, with the wind-chill nearing zero. But if previous years’ estimates are any guide, there could have been several million frostbitten fingers and toes.

The hardiness of the pro-life marchers was not matched, however, by counter demonstrators, as a dozen or so usually meet the pro-lifers on the steps of the Supreme Court. A local radio station reported this morning that the counter demonstration had been cancelled, most likely due to the weather.

“A little chilly for them? It is harder to fight for the dismemberment of children than it is to fight for their lives,” said the robustly confident 23-year old Lila Rose, president of LiveAction, the group that carries out undercover investigations of abortion facilities.

Kristen Hawkins, the 25-year old who runs Students for Life of America, now with 700 chapters on college campuses, told Breitbart, “We see this every year. Their numbers dwindle. Last year they had around 15 people. You can tell who’s going to abolish abortion when you look out in the crowd and you see 600,000 (sic) young people out there and they can’t get 15 people at the Supreme Court.” Hawkins said the brutal cold was God’s “kick in our own butt. Pro-lifers didn’t abolish abortion last year, better get to it this year.”

The Chairman of the Republican National Committee gave his members attending the annual RNC Winter Meeting the morning off so they could join the march. They could be seen wearing red RNC ball caps, and there were lots of them pinned up against the metal fence near the stage. 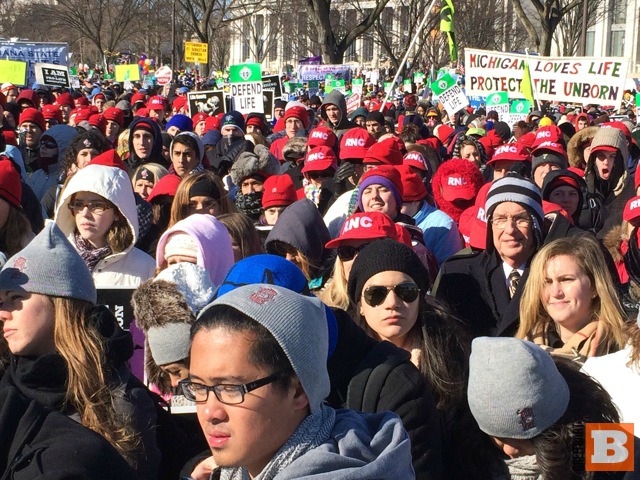 Priebus told Breitbart News, “Life is a core value of our party. Participating in the march was something a lot of our members wanted to do and I thought it was a great thing to accommodate and a natural thing for us to do.”

Priebus went on to commit the party to finding a better way to talk about the issue:

It doesn’t take a rocket scientist to figure out that one strategy that’s not going to work is just getting punched in the face and not responding. That’s a losing strategy. We’ve got candidates out there like Terry McAuliffe. These guys agree with gender-based abortion, abortions in the 5th month of pregnancy. Those are positions that 80% of the public doesn’t agree with. They agree with us. But what do we do instead, keep quiet and see how strong our jaw is. That’s a terrible strategy.

The march this year was played out against the backdrop of enormous legislative losses for abortion supporters in State Houses around the country. A new study from the Alan Guttmacher Institute, founded by Planned Parenthood, reports that 2013 was one of the worst years ever for the abortion industry.

The report also says only 13 States were considered “hostile to abortion” in 2000, but that number has risen to 27 states in 2013. Hostility is measured by four or more “major abortion restrictions.” A majority of red states are in the hostile category, while the blue states tend to fall into the “supportive” category. Four key Obama states–Virginia, Ohio, Pennsylvania and Michigan–fell within the “hostile” category.

Charmaine Yoest, president of Americans United for Life which drafted many new pro-life laws in the states, told Breitbart News, “Our opponents sometimes have their finger on the pulse better than we do. When you see them so upset over our great gains at the state level, that’s how you know there really is a rising pro-life tide.”

Marjorie Danenfelser, president of the Susan B. Anthony List which funds political campaigns, is equally jubilant. “I think they are going to have their worst year ever in 2014,” she stated. “This is the year pro-life candidates are going on the offense, on the 20-week bill especially, and pro-choice candidates are going to have a hard time explaining why they can’t draw a line, a modest proposal, at 20 weeks. It’s going to be a good election year.”

Russell Moore, president of the influential Southern Baptist Ethics and Religious Liberty Commission, told Breitbart News, “I think the conscience of America is awakening to what happens in abortion. There’s more of a sense that this isn’t just an issue or a decision but this is a person, a neighbor, a human being,” he explained. “I think that message is starting to get forward culturally.”

Moore pointed out that his own South Baptist Convention favored the abortion decision back in 1973 but is now among the most pro-life denominations in America. 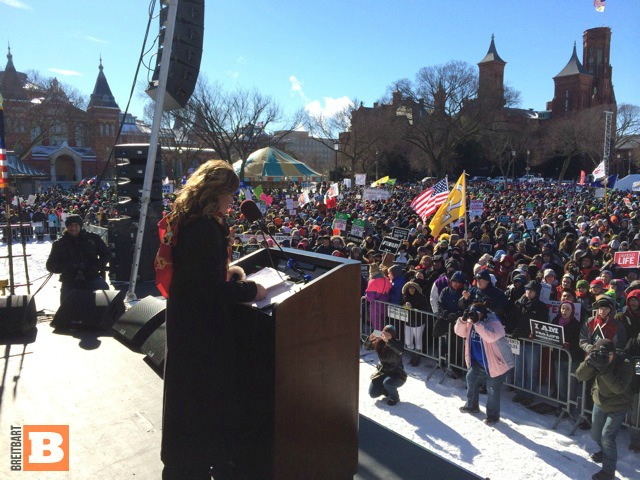 March for Life President Jeanne Monahan expressed the confidence felt by the pro-life movement: “We are certainly a hardy bunch. There is no sacrifice that is too big for something as important as this and as you see all the happy faces of the young people out there who came in droves.”

Indeed, unlike the pro-choice movement, there was hardly a gray hair to be seen, even if most of the heads were covered from the arctic freeze.