This was a few years ago when my wife and I were still living in Los Angeles. I was at church. This had been our beloved church for years, and one morning during regular Sunday service I was startled to see a blonde white guy sitting next to me.

Being one of the whitest men in America myself, you wouldn’t think the sight of another white guy would come as any surprise. It did, though, and it took me more than a moment to figure out why. Then I realized that oftentimes I was the only white person at church. When you live and worship in a neighborhood made up almost entirely of Asians and Hispanics, the sight of a white person is something you notice.

After so many years and hundreds of services, this was the first time I had ever thought of my fellow parishioners and neighbors in terms of race. No one had ever made me feel as though I was part of a very small minority group, so it never came up. We were just neighbors, fellow Southlanders, Americans, human beings… Race never had anything to do with anything.

Of course it is.

This is why the vanity #RaceTogether campaign launched by Starbucks CEO Howard Schultz is so toxic.

At first, it was just dumb. If some pretentious billionaire wants to continue the ongoing left-wing tradition of politicizing absolutely everything — whatever, I have a Keurig. The very idea of thousands of under-employed Starbucks baristas engaging customers in a racial conversation is the stuff of “Saturday Night Live,” of self-parody.

The joke stopped being funny when I saw this Starbucks questionnaire, which was stuffed in every issue of  USA Today and apparently pops up on your device if you access the free wireless available at your local Starbucks. 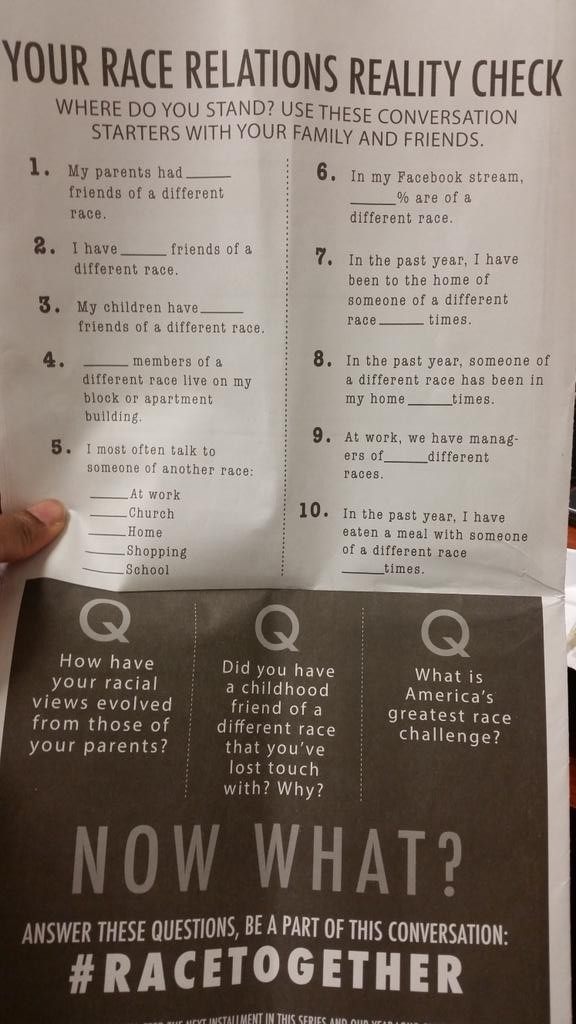 Every question demands you put your friends, co-workers, neighbors and loved ones in a box and see them through a prism of race. Suddenly the people in your life aren’t people but rather symbols –symbols of your own virtue in the eyes of who exactly…? An out-of-touch white guy who has fooled American liberals into believing they are saving the planet ever time they fork over $7 for a cup of coffee? Yes, and all the other terrible people who view others through a racial prism.

For nearly a dozen years of my adult life I have lived in neighborhoods where I was in the minority group. Other than Los Angeles, I spent a couple of years in Milwaukee’s inner-city. At the time we called it the ghetto. The neighborhood was mostly black. I didn’t see it as mostly black. I didn’t see my co-workers, neighbors and friends as mostly black. We were neighbors. We were poor. We worried about crime and the rent and the bars on our windows if there was ever a fire. Race never had anything to do with anything.

Today I live in a small town in North Carolina. There are four houses in my cul de sac. Two of the people in my neighborhood are black, one, my wife, is Mexican. In my neighborhood, which is located in a former Confederate state, race never has anything to do with anything.

In my marriage, race has never had anything to do with anything.

In my family, which is more Jewish,  gay, black, Puerto Rican, and Mexican than white, race and sexuality has never had anything to do with anything.

I’m not saying it doesn’t come up. Like wearing glasses or ones taste in music, it’s something we sometimes kid each other about, and those jokes are about as meaningful as jokes about shirt color.

My family isn’t ethnic or exotic or multicultural or diverse, my family is American.

I’m not going to fill out that noxious Starbucks questionnaire because it makes me more than a little queasy to think about people — especially the people in my life — as hash-marks on some scorecard that is supposed to tell me if I’m a good person or not.

Out here in the real world — that exotic and foreign part of America Starbucks’ billionaires sometimes fly over — we’re actually living Martin Luther King’s colorblind dream. Race just isn’t an issue … until some someone still obsessed and obviously uncomfortable with it abuses his megaphone to demand we make it an issue.