Unless Congress moves to limit current legal immigration rates, the U.S. will add at least 10 million more legal immigrants over the next decade — more than the combined populations of seven major cities, according to GOP staffers on the Senate’s Immigration subcommittee.

A chart the committee released Monday reveals that the populations  of Atlanta, Los Angeles, Chicago, Boston, Denver, St. Louis, and Dallas together would not equal the number of new immigrants set to be admitted over the coming ten years.

The chairman of the subcommittee, Sen. Jeff Sessions (R-AL), has been arguing for a curb to current immigration levels.

“What we need now is immigration moderation: slowing the pace of new arrivals so that wages can rise, welfare rolls can shrink and the forces of assimilation can knit us all more closely together,” Sessions wrote in an op-ed Thursday (emphasis his). 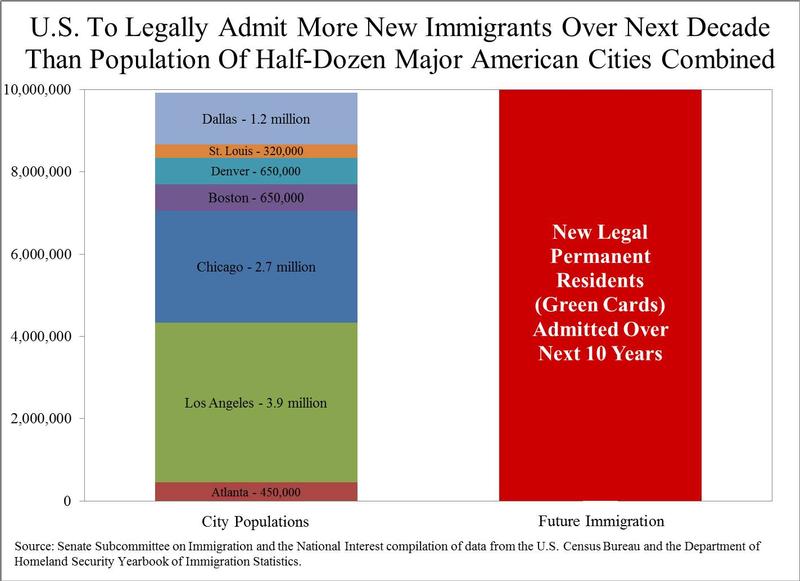 In conjunction with the release of the chart, the subcommittee issued an analysis of the expected flow over the coming ten years, noting that under current policy the U.S. issues “green cards” to about a million new Legal Permanent Residents annually.

“New lifetime immigrants admitted with green cards gain guaranteed legal access to federal benefits, as well as guaranteed work authorization,” the analysis reads. “LPRs can also petition to bring their relatives to the United States, and both the petitioner and the relatives can become naturalized citizens.”

The analysis notes that in the 1950s and 1960s only about 285,000 new permanent residents were admitted annually — or less than 3 million in a decade — and over all the foreign-born population actually declined from the 1950s-1970s.

“During this economic period, compensation for American workers nearly doubled,” the analysis reads. “These lower midcentury immigration levels were the product of a federal policy change—after the last period of large-scale immigration that had begun in roughly 1880, President Coolidge argued that a slowing of immigration would benefit both U.S.-born and immigrant-workers.”

Since the 1970s, however, the report notes that the foreign-born population in the U.S. has quadrupled to 41.3 million in 2013 as the share of working age men (25-54 years old) has tripled since the 1960s. It notes that the 2013 Senate Gang of Eight immigration bill, S.744, would have continued the trend of increased immigration by tripling the number of green cards available over the next decade.

The analysis further noted that visa overstays make up a significant part of illegal immigration and that the Census Bureau is projecting that net immigration will be 14 million by 2025.

“Not only is the population of foreign-born at a record level, but Census projects that, in just eight years, the percentage of the country that is foreign-born will reach the highest level ever recorded in U.S. history, with more than 1 in 7 residents being foreign-born and, unlike the prior wave, surge towards 1 in 6 and continually upward, setting new records each and every year.  In 1970, less than 1 in 21 residents were foreign-born,” the report reads, noting that this is occurring as Gallup has shown that a majority of Americans want to see a decrease in immigration rather than an increase.