A new poll shows that a majority of Democrats want to limit free speech with laws that would prohibit so-called “hate speech.” 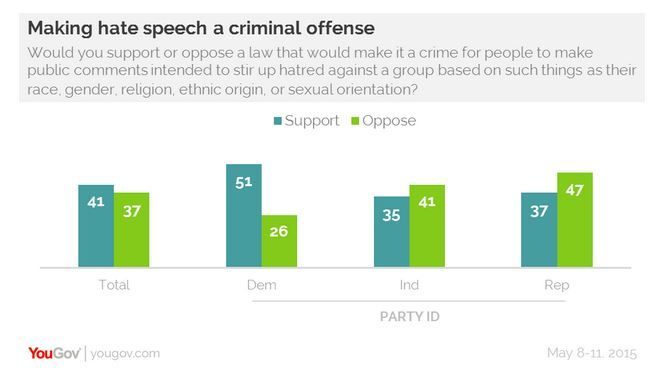 The poll suggests a clear reason why incidents such as the Charlie Hebdo attacks in Paris and the recent attempted assassination of cartoonists in Garland, Texas, become mired in partisan politics within the United States. By a ratio of nearly 2:1, Democrats believe free speech should be curtailed when it involves “hatred” for another group. The exact nature of “hatred” is undefined, but real-world examples demonstrate it can be something as simple as drawing a cartoon of Muhammad.

A clear example of this desire to limit speech can be found in the New York Times editorial board’s reaction to the attack in Garland. In a piece titled, “Free Speech vs. Hate Speech,” the Times criticizes Pam Geller, the organizer of the cartoon contest and the intended victim of the attack. Speaking of Geller, the Times wrote, “she achieved her provocative goal in Garland — the event was attacked by two Muslims.” The Times goes on to argue that no amount of violence—not the Charlie Hebdo attacks, not the theatrical brutality of ISIS, not even 9/11—can justify “provocations” (i.e. cartoons) of Islam. This is the severely limited view of the 1st amendment the left-leaning NYT has already embraced.

In contrast, the opposing view, held by most Republicans and independents according to this YouGov poll, is probably best exemplified by a piece Eugene Volokh published at the Washington Post:

The 1st Amendment protects all speech, but there is no doubt the left is increasingly comfortable with limiting this. Hillary Clinton has said that overturning Citizens United is a priority for her if elected President. That decision found that a film critical of Hillary could be shown on TV prior to an election. Hillary says she would support a constitutional amendment to overturn the decision. This week, she added that opposition to the case would be a litmus test for any Supreme Court Justices she would appoint.

A majority of Democrats already support limiting free speech. Imposing new limits to speech as a matter of law is already on the left’s agenda.