Sen. Rand Paul’s America’s Liberty Super PAC is out with a new ad attacking Sen. Ted Cruz as a “Canadian” who supports President Obama on domestic surveillance extensions in the Patriot Act.

The extreme-style smackdown ad features Paul as the shirtless hero of a Sunday brawl in the Senate over the NSA and the right to privacy.

Featuring a picture of Cruz with Obama and the backdrop of a Canadian flag, the ad calls the Texas Senator a “capitulating Canadian” who is “backing Barack’s bill.” 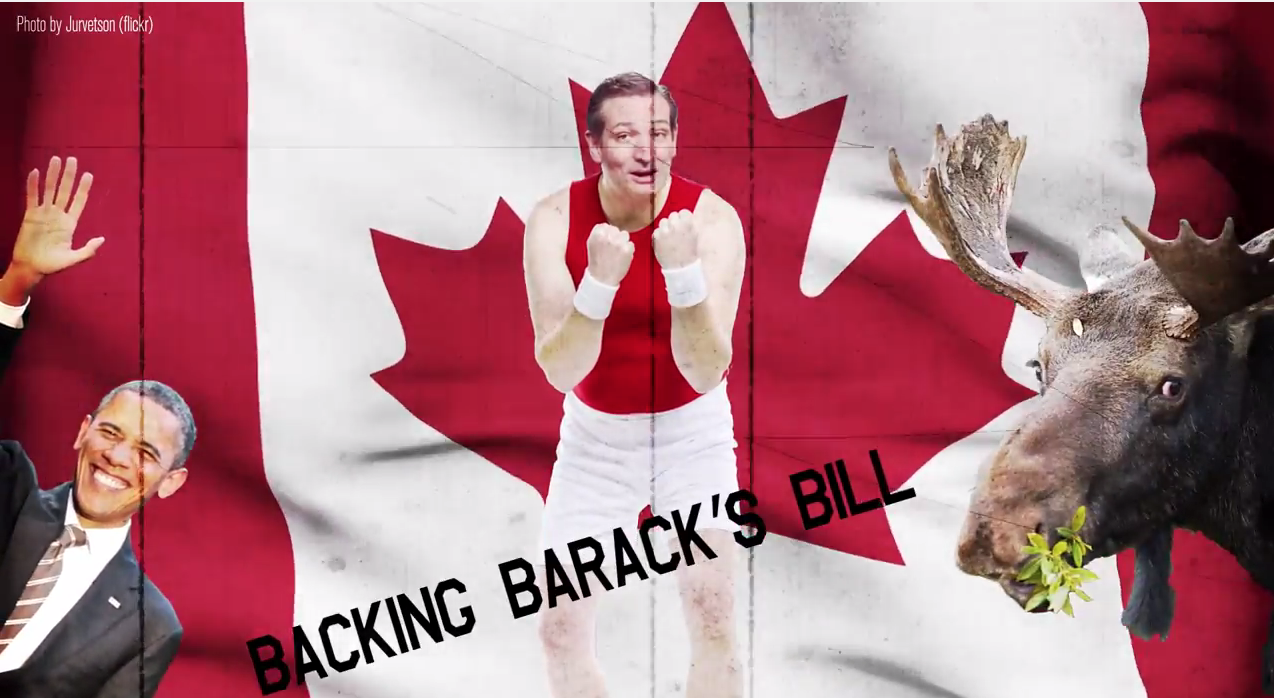 Technically, the ad is not endorsed by Sen. Rand Paul’s campaign, but the Super PAC is endorsed by Paul and led by  former campaign strategist Jesse Benton, who married into the Paul family and worked for not only Rand Paul’s Senate campaign but also Ron Paul’s 2008 presidential campaign.

A spokesperson for Cruz’s campaign declined to comment on the ad, the latest hit on Cruz, who was once an ally of Rand Paul’s until they both began preparing for a 2016 run for president.

The friction between the two Senators has been growing, after Cruz criticized Paul on the campaign trail for voting against the USA Freedom Act — a bill that includs restrictions on the NSA’s ability to collect phone records in bulk, but failed to earn support from privacy advocates.

“Rand Paul is a good friend of mine, he and I have fought side by side many times,” Cruz said in April, while touting his vote for the bill.

“Unfortunately Rand voted no,” he added.

Paul’s team defended his vote, arguing that it did not go far enough to fix the problem and would reauthorize portions of the Patriot Act.

But Cruz and Paul’s friction goes back earlier than a moment on the campaign trail in April. After CPAC in March 2014, Cruz admitted that he disagreed with Paul on foreign policy.

“I’m a big fan of Rand Paul; he and I are good friends. I don’t agree with him on foreign policy,” Cruz said on ABC’s “This Week.” “I think U.S. leadership is critical in the world, and I agree with him that we should be very reluctant to deploy military force abroad, but I think there is a vital role, just as Ronald Reagan did.”

In response, Paul indicated he was frustrated with Cruz for “mischaracterizing” his positions during an appearance on the Sean Hannity Show.

“We always have been good friends. I’m not real excited about him mischaracterizing my views, and you know, I won’t let that pass,” Paul said.