Hillary Clinton has managed to avoid any questions about the Confederate flag, even as her Republican rivals have faced a media onslaught since the murder of nine black congregants by a racist white gunman in a Charleston church last week. Vintage Clinton merchandise featuring the Confederate flag has begun to surface on the Internet, however.

Breitbart News has contacted the seller, who vouches for the button’s authenticity.

Another item purports to be a button supporting Hillary Clinton in Alabama in 2008. It features a Confederate flag behind a map of the state and a portrait of Clinton, above the slogan, “Heritage not Hate.” (Barack Obama won that state’s primary.) 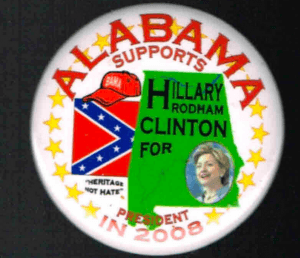 In addition, campaign merchandise featuring Bill Clinton and the Confederate flag has surfaced widely across the Internet.

There is no indication that the Clintons ever discouraged Confederate flag-themed merchandise being produced in support of their respective candidacies.

Although Hillary Clinton has not commented on–or been asked about–the Confederate flag controversy, she told the U.S. Conference of Mayors last week that white Americans needed to “question our own assumptions and privilege.”

Update: In 2007, Hillary Clinton commented on the Confederate flag in South Carolina, saying that she “personally would like to see it removed from the Statehouse grounds.” She has not been asked about the flag in the present context.