If just reading the words ‘wind turbines’ makes you feel physically sick then spare a thought for the people who have had them thrust into their lives. A new report shows living near a wind turbine may harm emotional wellbeing after scientists discovered that low frequency sounds generated by rotor blades trigger a part of the brain which senses danger.

According to the Daily Telegraph, brain scans show that even infrasound as low as 8hz – a whole octave below the traditional cut off point for human hearing – is still being picked up by the primary auditory cortex. This is the part of the brain which translates sounds into meaning.

And a separate part of the brain, linked to emotions, also lit up when the seemingly ‘inaudible’ noises were played to volunteers in a lab.

Dr Christian Koch of the Max Planck Institute for Human Development in Berlin was responsible for the report. He said:

“The observations showed a reaction in certain parts of the brain which play a role in emotions.

“This means that a human being has a rather diffuse perception, saying that something is there and that this might involve danger.

“All persons concerned explicitly stated that they had heard something.” 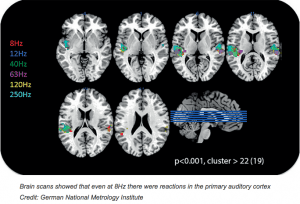 People living in the vicinity of wind farms have long reported experiencing sleep disturbances, a decline in performance and other negative effects. They make the causal link to the “infrasound” generated by the turbines

But the wind energy sector has always maintained that the sounds created by rotor blades are too low a frequency to be picked up by humans.

To test whether sounds could be heard Dr Koch’s team generated an infrasonic source which is able to create sounds that are completely free from harmonics. Volunteers were asked about their hearing experience, and these statements were then compared by to their brain scans (see image above).

The results revealed that humans hear lower sounds from around 8 hertz on – a whole octave lower than had previously been assumed.

“The wind industry takes all health and safety issues very seriously. This piece of work was, by the author’s own admission, just him thinking aloud and raising a number of possible issues relating to all types of infrastructure that could be researched further – he undertook no research at wind farms.

“The author himself stated that it would be scaremongering to make any a connection between wind farms and public health issues. There is an existing body of peer-reviewed scientific research, which clearly shows that living near a wind farm has no adverse effect on anyone’s health, and to suggest otherwise is inaccurate and irresponsible”.

Abbott is on the record saying he wants fewer “visually awful” wind farms in Australia and is keen for an inquiry into their health impacts. Turning off Australian government subsidies is just the first step in what will be a long campaign for a country abundantly rich in coal and natural gas.