Mexico, the nation from which most illegal immigrants are from, has continued to see murders dramatically increase unabated. FRONTLINE reports:

But as U.S. involvement in each nation has dropped off in recent years, killings much closer to home, in Mexico, have steadily, if quietly, outpaced the number of civilian deaths in Afghanistan and Iraq combined.

Last week, the Mexican government released new data showing that between 2007 and 2014 — a period that accounts for some of the bloodiest years of the nation’s war against the drug cartels — more than 164,000 people were victims of homicide. Nearly 20,000 died last year alone, a substantial number, but still a decrease from the 27,000 killed at the peak of fighting in 2011. 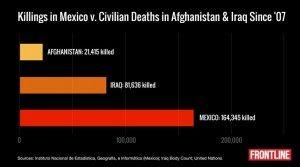 Some counts have blamed the Mexican drug war for as much as 55 percent of all homicides.

Others have put the estimate as low as 34 percent. Yet those figures have likewise been criticized as unreliable. For example, someone killed by a high-caliber or automatic firearm would be counted as a victim of organized crime, but if they were strangled or stabbed to death, they would not necessarily be considered a casualty of the drug war.

“In any of this data, a lot of dead people are not counted,” said Molly Molloy, a border and Latin American specialist at New Mexico State University. Molloy has focused her research on counting the dead in Mexico, and in an interview with FRONTLINE said: “The violence engendered by the system as a whole in Mexico is so huge and affects so many people in various violent ways, I think you have to look at the murders as a whole, because how are you going to separate them?”

As importantly, how do you separate the violence in Mexico from the United States without anything like a wall to hinder that migration of violence?

Kate Steinle is not an exception, and certainly not “a little thing” when one reads these shocking statistics.

Mexico is more violent than the Afghanistan and Iraq warzones combined for innocent civilians. Looking at these statistics, Kate is an indication of many more murders to come until sanctuary cities are stopped, border control is instituted, immigration controlled, and malefactors of ANY crime returned to their home country or put in prison.

This problems is, instead, a train wreck gaining speed and coming across the border. And what is the Obama Administration and cover boy Rep. Luis Gutierrez planning to do about this? “Comprehensive Immigration Reform” that includes more open borders.