President Obama is back on the golf course this afternoon, his second golfing trip since he left for his 16-day vacation at Martha’s Vineyard on Friday.

Today Obama arrived at the Vineyard Golf Club shortly after 1:00 p.m. with three golfing partners – Glenn Hutchins, a co-owner of the Boston Celtics and a private equity investor, Cyrus Walker – a cousin of White House senior adviser Valerie Jarrett, and Dr. Jim Yong Kim, the president of the World Bank. (All photos via AP) 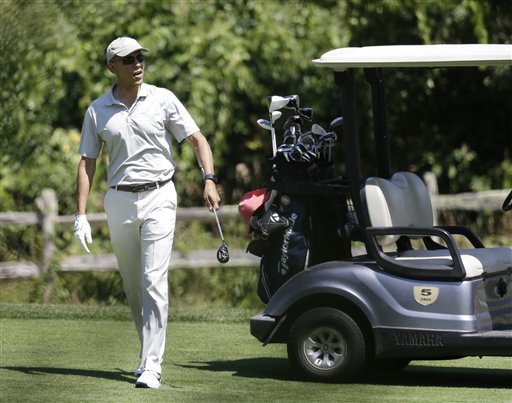 On Saturday, Obama golfed with HBO’s Larry David of the show “Curb Your Enthusiasm,” Walker, and Robert Wolf, the founder of 32 Advisors and a major Ex-Im Bank supporter.

The foursome spent about four hours at the Farm Neck Golf Club, where several photographs were taken of the crew.

Press photographers were allowed onto the course where Obama was pictured exhibiting his signature putting antics. 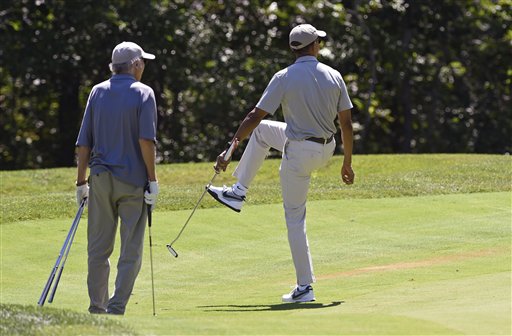 According to the White House press pool, it was ineffective.

Last year, Obama golfed nine times during his 15-day vacation, in the midst of chaotic world events such as the violent protests in Ferguson, Missouri and beheading of American journalist James Foley at the hands of ISIS.

Last night, a man was shot in Ferguson by police officers after he began firing at an undercover police vehicle with a stolen handgun. 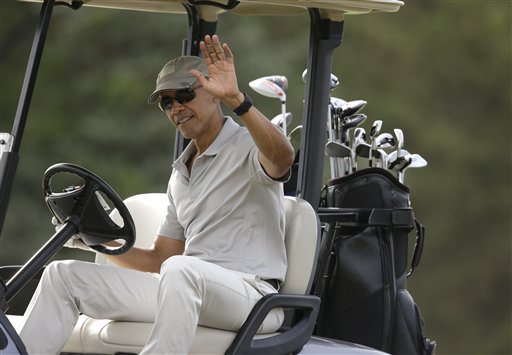