Is it time for Democrats to panic yet? Hillary Clinton’s social media mentions are running 75% negative thanks in part to the investigation surrounding her private email server.

The surprising statistic was provided to the Washington Post by Zignal Labs. Zignal, which describes itself as a “realtime, cross media story-tracking platform,” identified 400,000 mentions of Hillary on various social media platforms over the past five-day period.

A full 3/4 of all the online talk mentioning Hillary was negative, suggesting these issues will continue to impact her in future polling. A quarter of the online mentions were connected to the ongoing investigation into Hillary’s use of a private email server. Another hot topic was socialist Senator Bernie Sanders, who has been rising in polls and drawing large crowds to his events.

The news that Hillary is heavily underwater in online discussions will probably not be of comfort to Democrats who have been shaken by successive revelations about Hillary’s email server as well as her inability to generate much enthusiasm on the stump.

A story published in The Hill last week quoted one Democratic strategist saying, “I’m not sure they completely understand the credibility they are losing, by the second.” A Fox News poll released last week found a majority of respondents (58%) believe Hillary “knowingly” lied about the email server.

In a story published today by the Washington Post, Chris Cillizza quotes an unnamed Democratic consultant saying, “She has always been awkward and uninspiring on the stump.” The consultant still believes Hillary can win the nomination but holds out some reservations about her ability to win a general election. Another Democratic operative who witnessed Hillary’s recent attempt to brush off the email scandal with a joke tells Cillizza, “The combination of messy facts, messy campaign operation and an awkward candidate reading terrible lines or worse jokes from a prompter is very scary.”

The Post published a word cloud based on Zignal’s findings. The most prominent words in the cloud include “fbi,” “secret” and “server.” 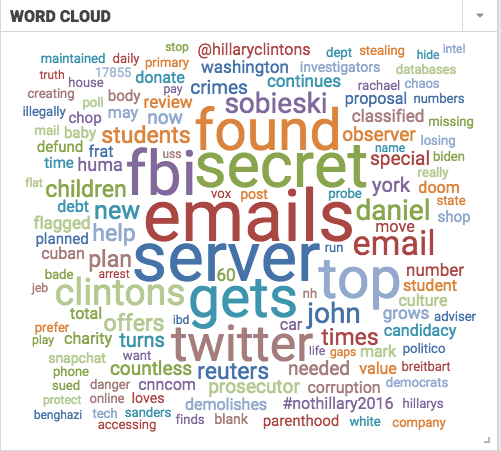