ThinkProgress published a factually incorrect piece in the immediate aftermath of the mass shooting at an Oregon community college. Pundits and experts mentioned that the campus was a gun-free zone and ThinkProgress wasted no time in publishing, “UCC Was Not A ‘Gun-Free Zone’ Because Public Colleges in Oregon Can’t Ban Guns.” The apparent pro-Democratic Party front group mistakenly assumed that the community college in question was somehow under the same guidelines as state universities.

The school, Umpqua Community College, was, in fact, a gun-free campus. An archived copy of their student code of conduct shows: 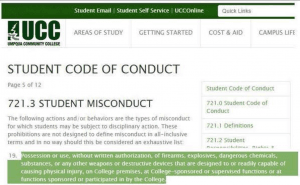 In addition to the written policy of the community college, the university’s president, Rita Cavin, stated in a press conference that the university is a gun-free campus and there are “no plans” to change security policy.

On Thursday, a shooter reported killed at least 13 people and injured many others at a community college in Oregon. Just minutes after the incident, commentators sought to attribute the incident to the fact that Umpqua Community College was a “gun free zone.”

“The gun free zones are the areas that tell licensed gun owners that you are not allowed to carry your weapon in this facility…If you’re going to perpetrate some act, you know that most people are not going to be armed,” CNN “military analyst” Rick Francona said a few minutes after the shooting.

A retired Navy Seal, Jonathan Gilliam, also appearing on CNN, went even further. Blaming the “gun free zone” for the scope of the tragedy and adding “the only thing that’s going to stop a gun is another gun.”

Umpqua Community College, however, was not a gun free zone. A 2011, state court decision prohibited public colleges from banning guns on campus. The decision stemmed from a suit filed by the Oregon Firearm Education Foundation, a gun rights group. There was an effort to pass a new law to reinstate the ability of public colleges to ban guns. That measure was defeated by gun rights advocates.

Breitbart News will update this article to reflect that ThinkProgress corrected their false assertions if they do so. At the publishing of this article, several thousand of their readers have tweeted the false information to their own followers.