Hundreds of the Common Core test questions that have already been given to students have finally been released by the Partnership for Assessment of Readiness for College and Careers.

The PARCC group is one of the two government-funded test consortia that are developing school tests under the Common Core standards. The items “were built with robust mathematics problems and authentic reading passages selected and reviewed extensively by dozens of educators from PARCC states,” says PARCC.

The test items for various grade levels and scoring criteria, along with sample student responses and answers can be viewed here.

Some of the test items are straightforward and typical. Here’s an example from the third-grade PARCC math test:

Other questions, however, require students not only to answer the question, but to also explain how they arrived at the answer. The items below are also from the third-grade PARCC test. Since the third-graders are being tested on these operations, parents can only assume they have been taught the math basics that allow them to be successful in answering the questions. One of the concerns expressed by many standards experts is that Common Core does not teach children foundational basics on which to build knowledge and, ultimately, gain mastery. 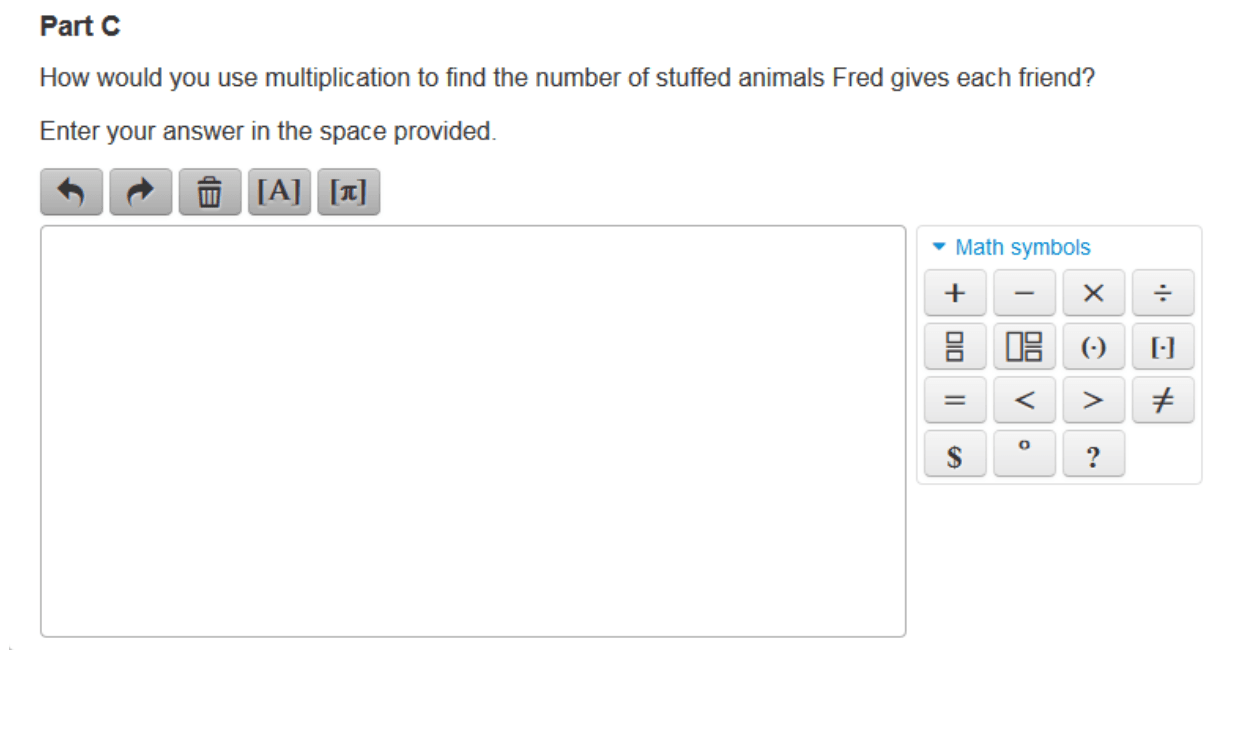 Below is a student response to the test item above that PARCC considers worthy of full credit, despite the spelling error, and PARCC’s rationale: 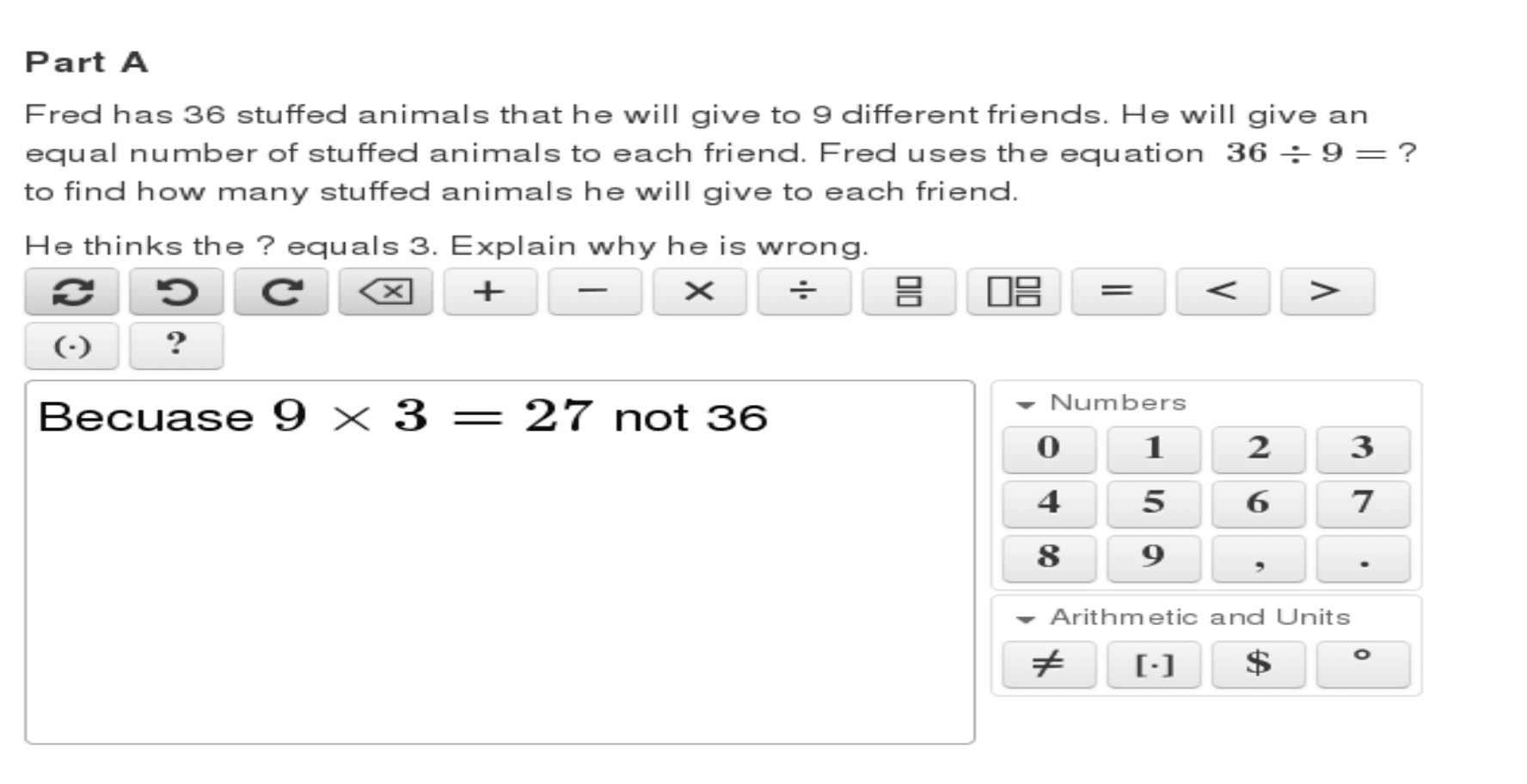 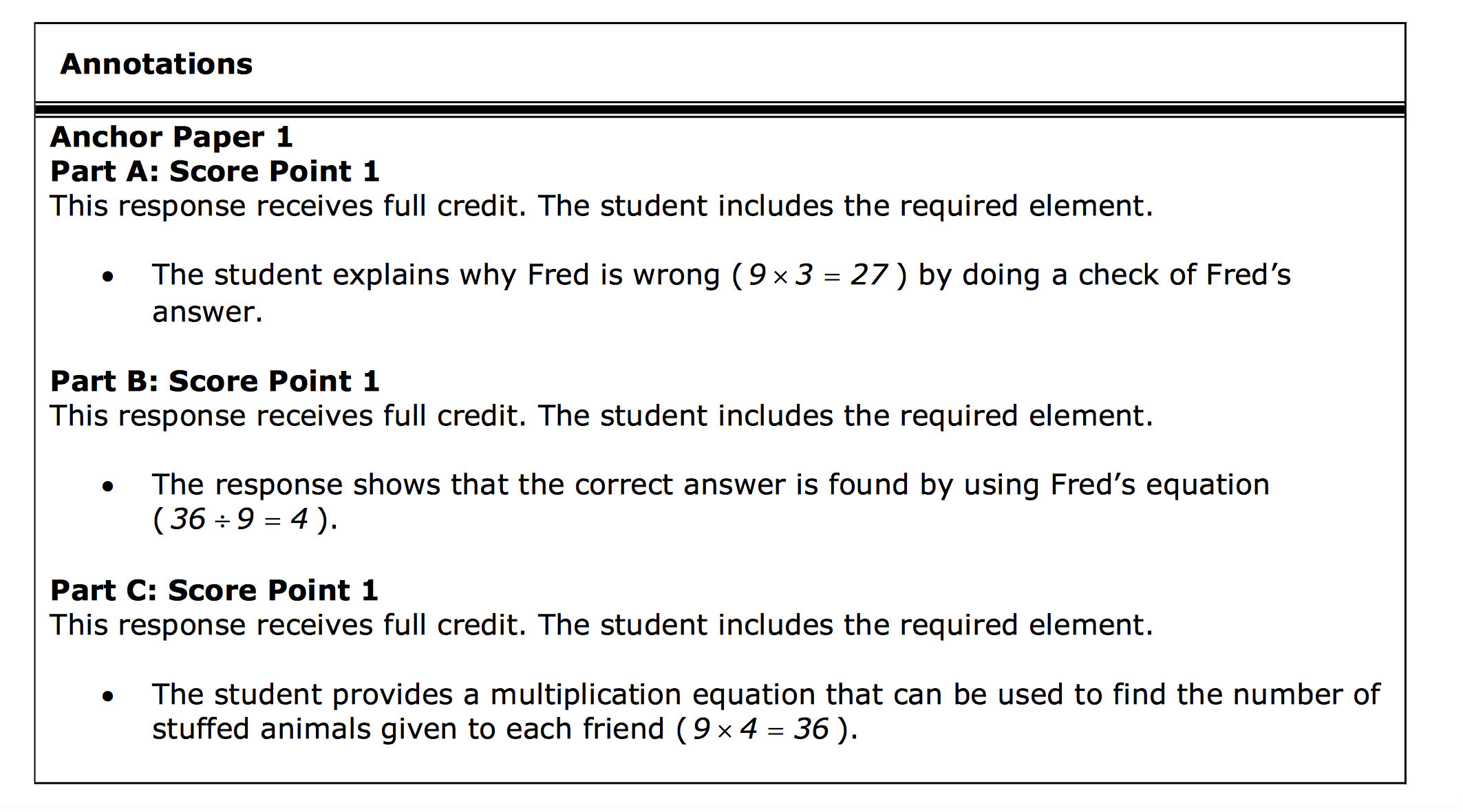 A student response to which PARCC assigns partial credit is as follows. Note PARCC’s annotation on Part B’s score of “0” that, “While (9 x 4 = 36) is a correct equation, it is not Fred’s equation…” 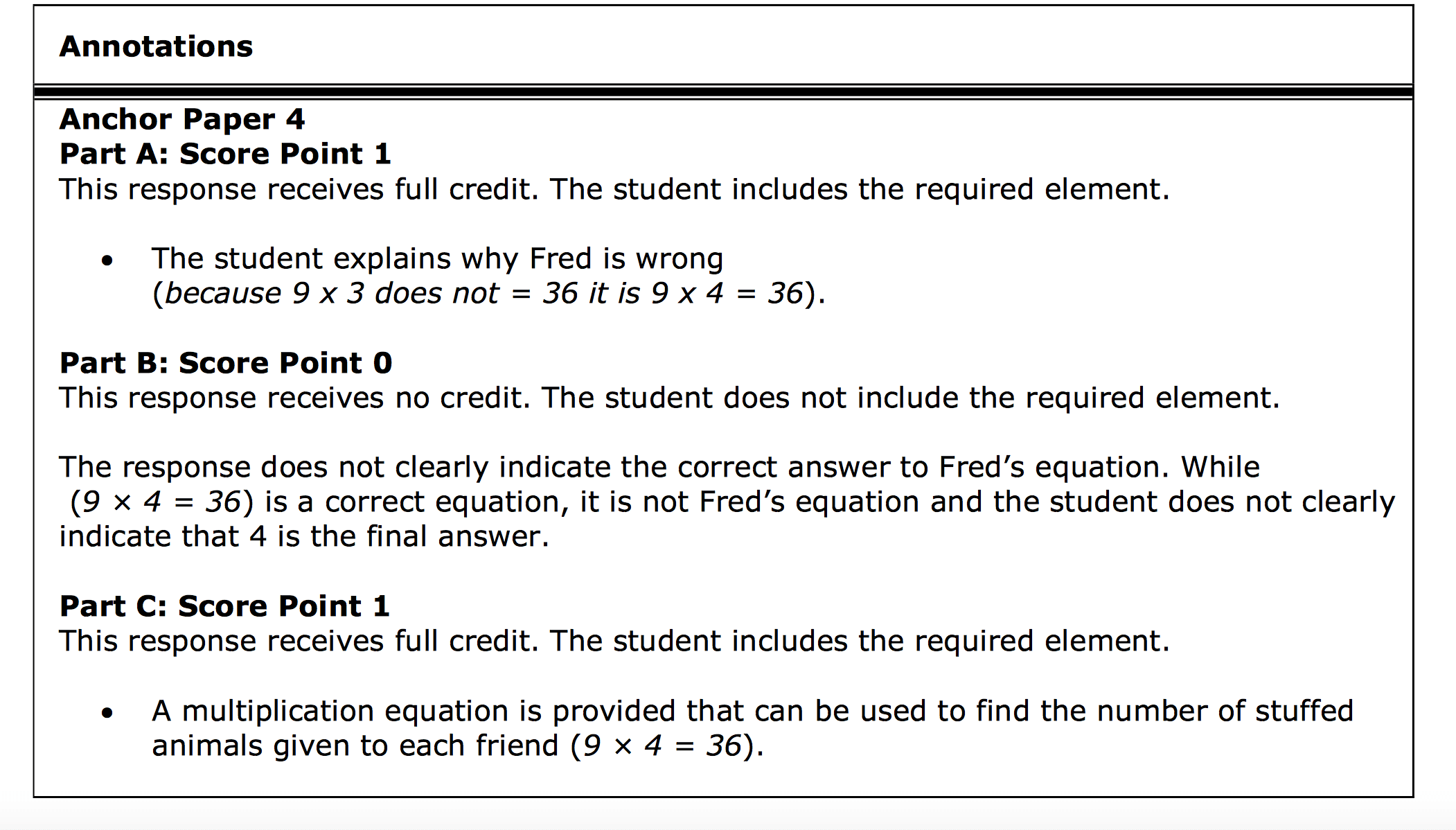 Another item example from the third grade math assessment: 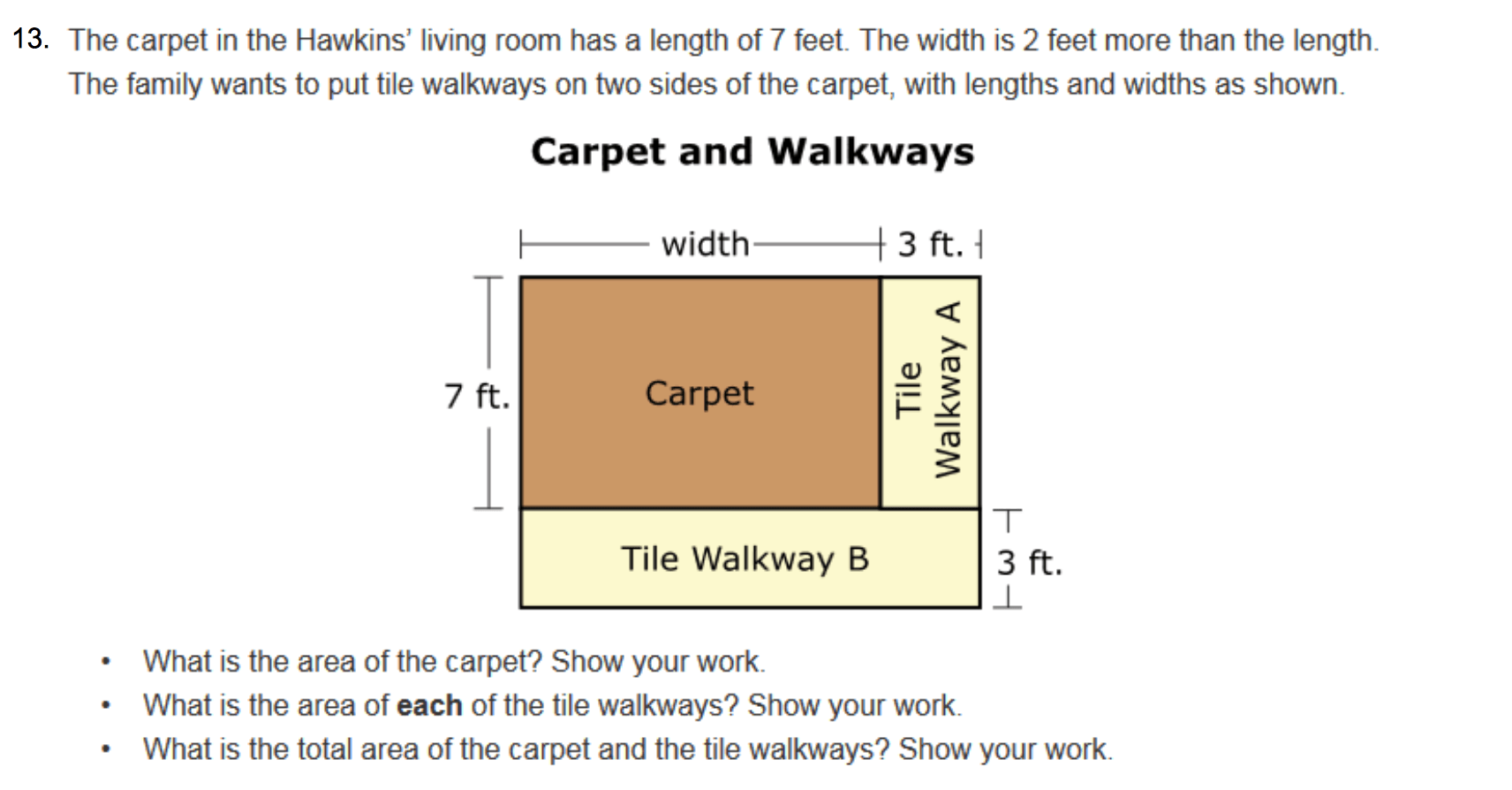 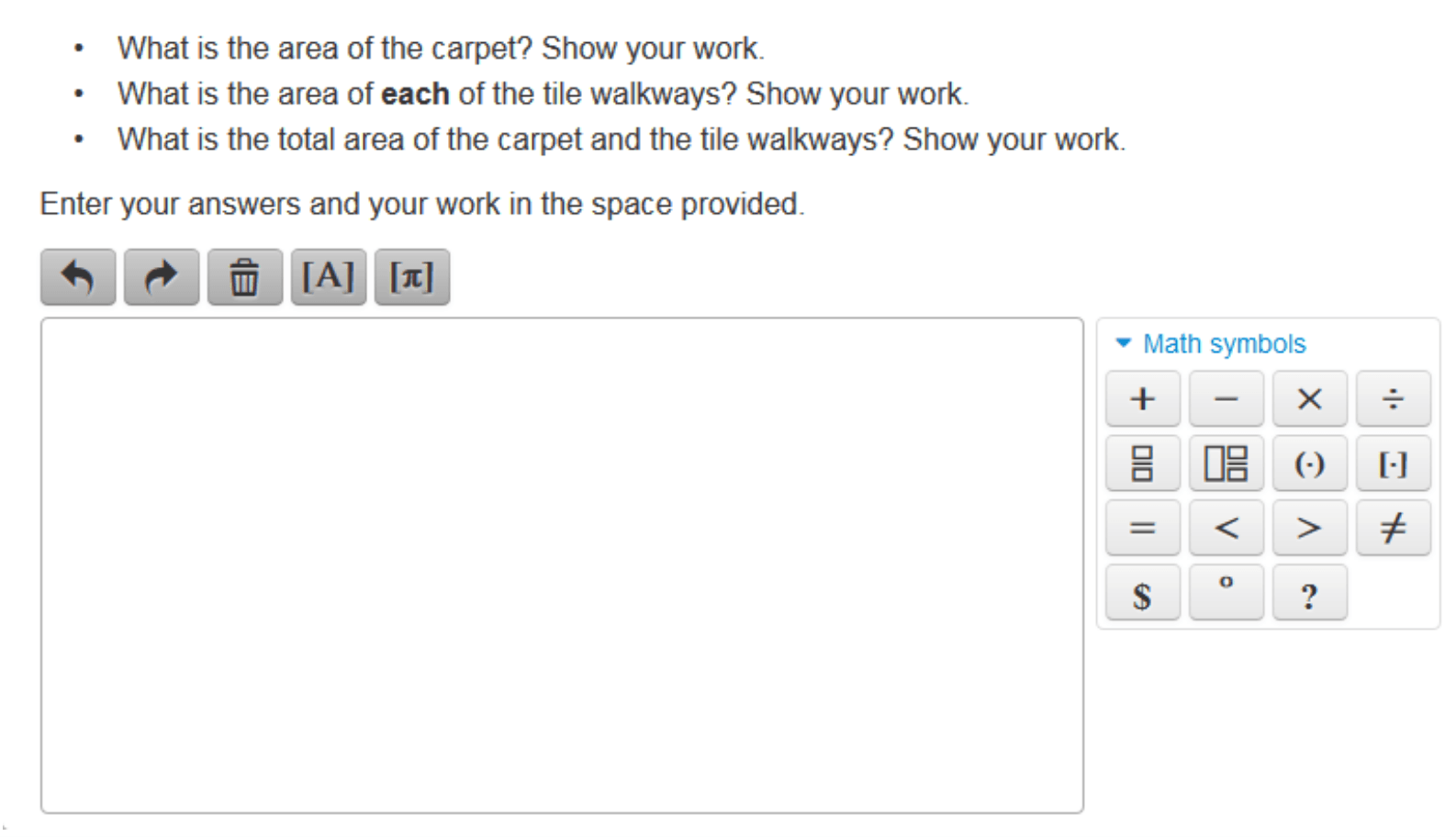 One of the most controversial aspects of the Common Core English Language Arts (ELA) standards is the emphasis on “informational texts,” rather than classic literature. In the third-grade informational text item below, PARCC does not allow parents and others to see the “Adorable Dormice” story due to “copyright restrictions,” and refers them instead to “the November 2011 issue of Ranger Rick ® magazine, accessible through your local library.” 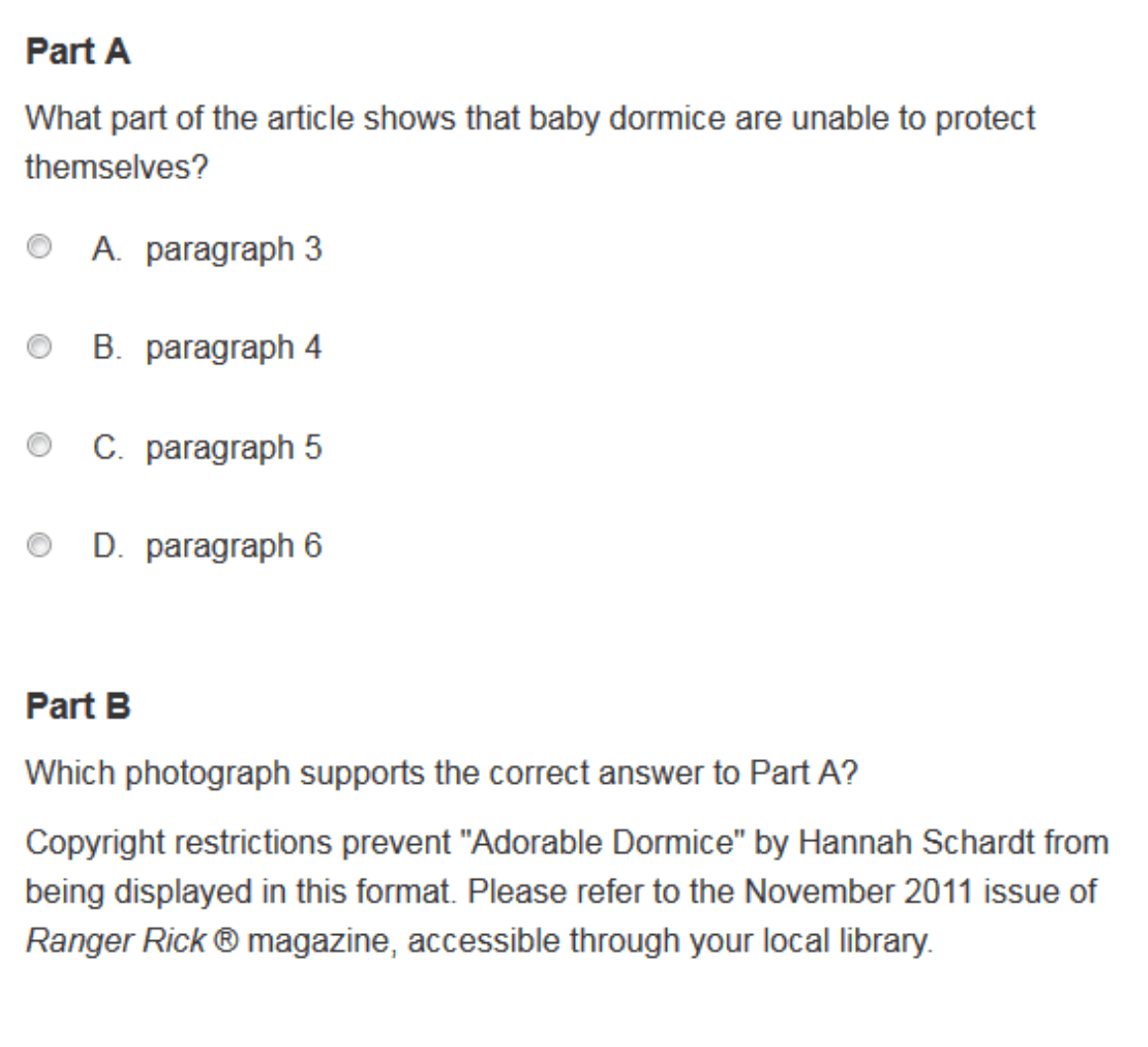 In the third-grade ELA item below, parents are told to access the story “Camping with the Cousins” by Sue Katharine Jackson in the August 2001 issue of Ladybug magazine, also “accessible through your local library.”

In yet another third-grade ELA item, students are tested on a “research simulation task,” which, according to PARCC, “requires students to analyze an informational topic through several articles or multimedia stimuli.” Third-graders are required to “read and respond to a series of questions and synthesize information from multiple sources in order to write an analytic essay.”

In the item example below, third-graders are told to read two articles about the Arctic and synthesize them for the activity below: 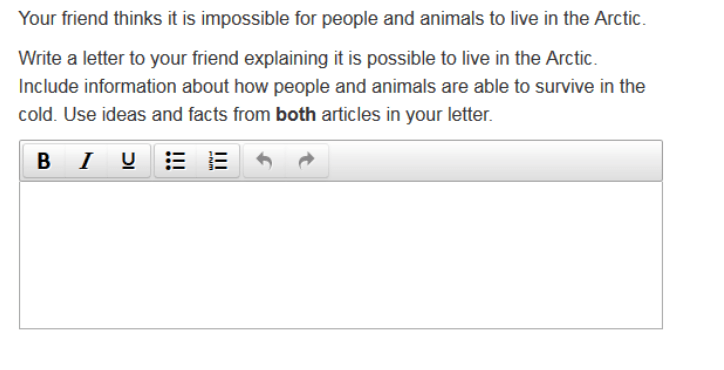 According to PARCC, the release of the test items “will give parents insight into the kinds of questions students are seeing on their tests, so assessments aren’t a mystery.”

“This is a game changer for parents,” claimed PARCC CEO Laura Slover in a press release. “The PARCC assessment is different from the assessments of the past because it requires students to think and show what they know. This is a great opportunity to be transparent so assessment isn’t a black box.”

“We’re giving teachers effective targets on which to put together classroom strategies to help their students succeed,” she added. “They’re able to see test questions and understand the concepts that are being measured in each item. As a former teacher I would have welcomed questions like these.”

The Common Core standards initiative has grown increasingly unpopular and many states have left the PARCC consortium to develop their own assessments. Though the PARCC website continues to list Louisiana, Mississippi, Arkansas, and Ohio as member states, these states have chosen to exit the consortium, leaving only seven states and Washington, D.C. currently remaining on board.