I have just got back from the Climate Change conference in Paris.

Rather, I mean the Paris Climate Challenge, a tiny three-day event being hosted in the centre of town by retired Church of England vicar Philip Foster and a tall blogger called Roger ‘Tallbloke’ for a ragtag group of – at best – 40 climate skeptics.

I was tempted to take a photo of them for this article. But I decided it would play right into the enemy’s hands.

Empty chairs and mostly grey-haired men with wild eyes and a mad-professor demeanour: it would have confirmed everything the greenies like to claim about climate “deniers” – that they’re old to the point of being senile, eccentric to the point of insanity and so out of touch with reality that no one wants to hear what they want to say anyway.

And you know what? If I were in the unfortunate position of having no scientific arguments left to support my case that’s exactly the kind of sad and desperate smear job I’d resort to as well.

Probably, I’d add that “deniers” smell of wee-wee (or poo-poo, if I really wanted to drive the point home); and, if at all possible, I’d try to follow the example of luminaries like President Obama, Bernie Sanders and the Prince of Wales and hint gently that these disgusting people were also kinda, sorta responsible for the Paris massacre and the San Bernardino massacre because by denying the reality of man-made global warming they helped cause the alleged “drought” in the Middle East which drove thousands of law-abiding, peace-loving Muslims straight into the arms of Islamic State.

Luckily for me, though, I’m not in that unfortunate position. Rather I’m on the side of the argument which has pretty much everything going for it: the science, the economics, the moral high ground, the intellectual credibility, the wit, charm and tell-it-like-it-is fearlessness…

But, yes, most of all what we have on my side of the argument are the facts.

There were lots of these at the Paris Climate Challenge conference – the kind of hard, verifiable scientific ones which simply weren’t available to the people up the road at the COP21 event.

The lack of observational evidence for “man-made” global warming

The 19-year “pause” in global warming which none of the alarmists’ models predicted.

Presenting these facts was an array of erudite figures – some of them, amateur enthusiasts like blogger Donna Laframboise, long-range weather forecaster Piers Corbyn (brother of Labour leader Jeremy, recently shown telling it like it is on to Andrew Neil on the BBC One This Week programme) and blogger Roger “Tallbloke” Tattersall; some of them distinguished academics, such as marine geologist Bob Carter and IPCC lead author and sea level expert Nils-Axel Mörner.

I grant you, apart from Laframboise, none of them is ever likely to win a beauty contest. But if you ever had to put them in a debate with anyone on the other side of the argument – Michael Mann, James Hansen, David Suzuki, Al Gore, whoever – they would win hands down on points simply because (and this really can’t be stressed often enough) the alarmists have no points. None. The science abandoned them years ago which is why now they’re so painfully, pitifully reliant on closed events like COP21.

The COP series of conferences (staged once a year in a variety of exotic locations) are a giant bubble inside which only true believers are allowed. That’s why people like me don’t get press passes. (The official reason given was that, due to the increased security following the Paris terror attacks they’d had to reduce their press quota.) The UN doesn’t want cheeky little boys pointing out that the climate Emperor is wearing no clothes.  All it wants is more tax, more regulation, more wealth redistribution and more global governance of the kind envisaged by the (recently deceased) Canadian Marxist and one world government enthusiast Maurice Strong when he launched the first major climate summit (and Agenda 21) in Rio in 1992.

What’s particularly absurd about this leftist conspiracy is that it is currently doing the exact opposite of the things left-wing people profess to care about: it is enriching crony capitalist fat cats at the expense of the world’s poor.

There are numerous examples of this in this week’s superb Spectator cover story by Matt Ridley entitled The Green Blob: Who Will Protect The Victims of Environmentalism?

We’ve diverted 40 per cent of America’s maize crop to feeding cars instead of people, thus driving up the price of food worldwide, a move which according to one study killed about 192,000 poor people in 2010 alone, and continues to affect nutrition worldwide. We’ve restricted aid funding for fossil-fuelled power stations in developing countries, leaving many people who would otherwise have had access to electricity mired in darkness and cooking over wood-fires — the biggest environmental cause of ill health, responsible for more than three million deaths every year.

Closer to home, by pushing up energy prices with climate policies, we’ve contributed to the loss of jobs of steelworkers in Redcar and Scunthorpe, and of aluminium workers in Northumberland (where I live and where coal from under my land has supplied the now-closed Lynemouth smelter — whose power station announced this week that it will reopen as a ‘biomass’ plant, that is to say burning wood from American forests, producing more carbon dioxide per unit of energy and at twice the price of coal). We’ve also worsened fuel poverty among the poor and elderly and we’ve damaged air quality in cities. These human costs are not imaginary or theoretical: they are real.

Even if you believe that “global warming” is real, in other words, the hugely damaging effects of policies being introduced to counter it are more real still.

Not many greenies get this. But one who does is a man who has about as much environmental credibility as anyone alive: Greenpeace co-founder Patrick Moore.

Greenpeace hates it when you mention Moore because he has since gone to what it considers the dark side. But you only have to look at this glorious gallery of pictures of Moore in his green radical youth. He was the real deal – sitting astride baby fur seals in an (unsuccessful) bid to stop them being clubbed to death, fearlessly steering his rubber inflatable boat into the path of Russian whaling shifts, narrowly missing being blown up when French intelligence agents sank the Greenpeace ship Rainbow Warrior in Auckland harbour, New Zealand. 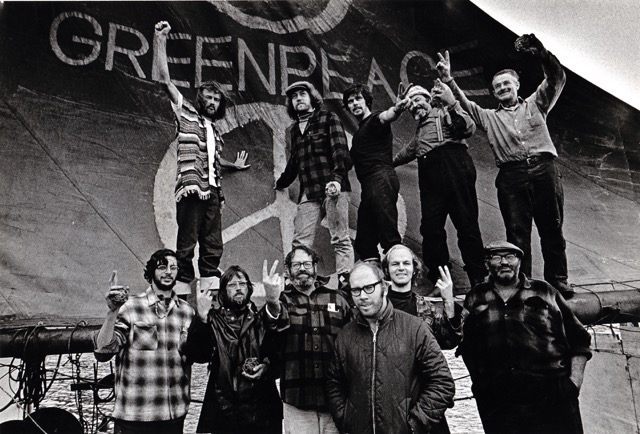 The Greenpeace crew on the first voyage to protest US H-Bomb testing in Alaska 1971. Patrick is under the “P”.

The reason Moore left Greenpeace was because he realised that, like the environmental movement generally, it had strayed so far from its original ideals.

“As we moved along the “peace” disappeared and the “green” was all there was left.” 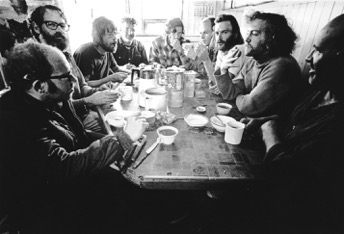 Crew around galley table. Patrick is on the right , 1971

They had turned into “eco fascists” – a term which, oddly enough, was invented by another of Greenpeace’s co-founders Bob Hunter. 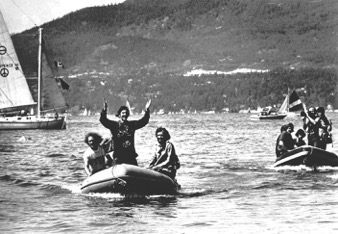 Returning home after whale campaign in 1975. Patrick is on the left driving.

Moore was another of the speakers at the Paris Climate Challenge conference. He recalled how, in the early days of Greenpeace, when trying to save whales, stop nuclear testing and industrial pollution was a minority activity for a few long-haired hippies, Bob Hunter used to refer to their tiny group of campaigners as “the thin green line.” 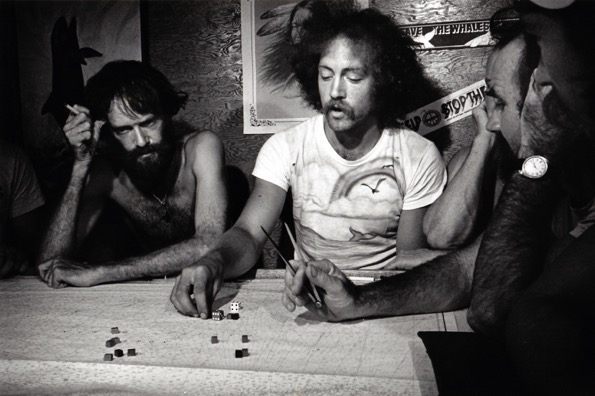 Plotting the position of the Russian factory whaling fleet in 1977

But things have changed a lot since then. The good guys these days, Moore noted, aren’t to be found among the 40,000 eco-fascist zealots at the COP21 conference but rather among the handful of climate skeptics who have braved obloquy, loss of income and career death to speak the truth about “climate change.”

Moore looked at his rag-taggle audience of grey-haired professors and wild-eyed sceptics and said:

“You are the thin green line now.”