BROWNSVILLE, Texas — An apparent smuggling group controlling a border neighborhood in Texas attempted to ambush a team of Breitbart reporters who were investigating security conditions on the Texas border with Mexico. The Galaxia “colonia” or neighborhood of western Brownsville, Texas, is in a region controlled by factions of the Mexican Gulf cartel. The neighborhood is notorious for drug and human smuggling and spillover violence. This reporter was there with Ildefonso Ortiz on assignment for Breitbart Texas and we were joined by a local reporter for a Spanish-language news outlet when frightening events began to occur. The local reporter asked not to be identified by name due to safety concerns for his family.

The matter began when sources in law enforcement told Breitbart Texas that the neighborhood that sits immediately on the U.S.-Mexico border was seeing high levels of successful and uninterrupted narcotics shipments and that a belief existed that some law enforcement on the U.S. side of the border were allowing the crimes to occur–an all-to-common occurrence in the region that is elaborated upon at the conclusion of this article.

Once in Brownsville on the night of December 7, the Breitbart Texas team met up at night with a local news reporter who knows the area and had agreed to go on his personal time to point out some of the key crossing points. That reporter parked his vehicle in the parking lot of the Brownsville Police West Side Substation with the belief that the well-lit parking lot and surveillance would keep his vehicle safe. His vehicle was clearly marked with the Spanish-language news outlet’s logos on both sides.

Breitbart Texas visited and documented several of the areas with evidence of high levels of illegal border crossings and made a short video showing the most egregious unsecured segment in the region.

After exiting the neighborhood, the team went back to the local police substation to pick up the company car of the local reporter for the Spanish-language news outlet. This occurred between 11:00pm and 12:00pm local time. The local reporters car was clearly identifiable as a news vehicle.

As we approached the parking lot we noticed a dark blue Chevrolet Avalanche with four men inside parked next to the local TV reporter’s vehicle. The four men inside were wearing hoodies. The parking lot was empty other than the two vehicles. Their car was off, had no lights on inside, and the occupants appeared to be hiding. 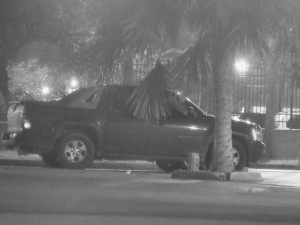 Concerned and uncertain whether the hooded men in the vehicle were undercover law enforcement waiting for us or smugglers seeking to teach a lesson about exposing their drug routes, we drove past them and out of the parking lot into the next street as we debated what to do. That is when a gray sedan with two men turned toward us and a visibly angry man rolled down his window as he positioned his car to block us in. The vehicle then attempted to pull close alongside of our vehicle. We were able to move more quickly than the man was able to confront us. Tensions rose as we decided what the next course of action would be. We drove past the police substation and pulled into a gas station, all the while debating over what we should do.

Initially we thought the four men may be undercover police officers or federal agents–which would be a relief–however, the underlying sentiment was that the four men were in fact cartel-connected gunmen or enforcers waiting for us to return. The same sedan from which we had just fled pulled into the gas station. The local reporter accompanying us insisted that he needed to retrieve his vehicle due to information about his family and sources being inside. The reporter also felt that the criminals would already know who he was and that he would be better just to deal with the consequences at the moment rather than have them catch up with him later.

We quickly pulled out of the gas station and into the police substation parking lot facing the four men in the Avalanche. As we pulled up we turned on our bright beams and attempted to act quickly enough that they couldn’t react.

The four men in the blue SUV stayed inside, however, the door on the front driver’s side moved back and forth as if the driver was deciding whether to get out or not.

We were able to speed off, but were followed. We had inadvertently left the camera on and captured audio of the ordeal. Please note that some of the language contained is extremely graphic.

We decided to pull up to a local bank for safety, assuming the lighting and likely existence of cameras would help to keep us safe as we discussed what we should do. We were still very confused as to what was occurring and concerned that the men seemed to feel completely above the law as they were clearly unconcerned about local law enforcement interfering with or stopping them. We felt unsafe to call police and determined that there existed a likelihood, considering the recent historical cases involving local law enforcement working with and on behalf of Mexican cartels, that the police who would respond could be connected to the group.

Another sedan began circling and then pulled up into a gas station across the street. The vehicle parked facing us and no one got out. Other vehicles began to pull up to a nearby parking lot without occupants exiting their vehicles. A newer sand-colored pickup pulled into the ATM near us, but the driver of that vehicle appeared to be the man who had been in the front passenger seat of the dark blue Avalanche we had encountered at the police substation.

We decided to move to a local coffee shop right off the expressway and buy time to try and make sense of what was happening and how we should react. Once at the coffee shop, we realized it was closed and the parking lot grew desolate so we decided to move to the Whataburger just further down the road. We sent the local TV reporter first and we waited in an effort to see if anyone was following. Everything looked okay and we set out for the well-lit Whataburger parking lot.

As we approached, the same blue Chevrolet Avalanche that had contained four men at the police substation parking lot drove in front of us. This time it only had two men inside, the same driver and one man lying back in the rear seat appearing to hold something in his hands that we believed to be a rifle. The driver rolled down his window and leaned in to say something as he pulled alongside us. We pointed our camera at his face and we sped our vehicle forward. His reaction was to immediately turn his face and drive off. The audio from this part of the encounter is below, but be advised that the recording contains extremely explicit language.

Through a series of back roads, we were able to get the local reporter home safely. At this point we saw proof that the men in the Avalanche had used a device to enter the vehicle of the local reporter when it had been parked at the police substation. Realizing that these men who pursued us felt immune to law enforcement to such an extent that they would break into a vehicle and go through its contents in the police substation parking lot and then actually wait there for us led to confidence that we had made the right decision in not involving local law enforcement in the heat of the moment. 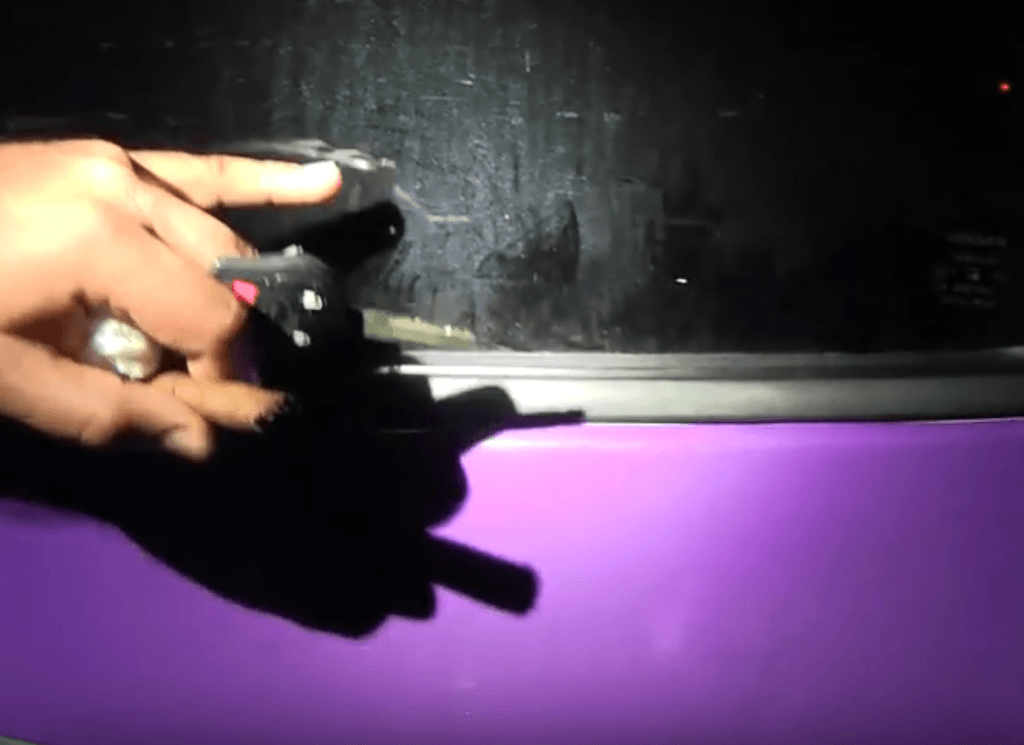 Though we are aware that many readers not living near the border probably have difficulty understanding why we would not call 911 in such a situation, our knowledge of the region’s public corruption played a significant role in the decision.

In March 2014, Kelton Harrison, a federal agent with U.S. Homeland Security Investigations (HSI) testified in federal court about the day he was shot during a drug surveillance operation in the rural border city of Hargill, as was revealed in 2014.  Hargill is roughly 70 miles West of Brownsville, Texas.

During the trial, Harrison testified that he had been in Hargill weeks before with his superior Agent Jon Paul Renau and they had been chased out of the town by an unknown vehicle.

It was later proven that the case was tied to a wider net of public corruption that resulted in over a dozen convictions of local law enforcement officials taking part in multiple drug trafficking conspiracies that became locally known as the “Panama Unit” case.

In a separate case as reported by The Monitor in September 2013, FBI agent Ricardo Ale testified in a public corruption trial that his FBI agents working a case in the nearby border city of Progreso, Texas, were forced to take backup vehicles to look out for their investigators. That case was not tied to drug trafficking but was network of bribery and contract rigging that included the local mayor and his brother who ran the school board.

Breitbart Texas returned to Brownsville the next day and filed a police report. The Brownsville PD classified the incident as a “suspicious vehicle” report. To our knowledge, they made no effort to obtain video footage from their substation’s parking lot, Chase Bank, or any of the businesses or cameras that likely could result in identifying the group involved.

The final conclusions to which we arrived were also caught on audio by the camera we had forgotten was left on and recording. We discussed the evening’s events with the local Spanish-language reporter. Warning, the audio contains graphic language.