At a party last week I bumped into an old Oxford contemporary of mine who has spent his entire working life since sucking at the green teat of Big Eco: Chief Sustainability Officer for Wessex borough council, or some such similar non-job. I’d just come back from the COP21 conference in Paris and when I told him this his brow furrowed in sympathy.

“But what are you going to do?” he said.

“Well, it’s all over for you isn’t it? The science is settled. You deniers have basically lost…”

Which, weirdly enough, was not dissimilar to what the leader of the UK Green Party Natalie Bennett said when I debated with her yesterday on LBC radio about the disastrous outcome of the COP21 climate summit. According to Natalie, I was the kind of dinosaur that people like her wouldn’t need to talk to for much longer because our opinions were now so discredited there was no place for us in the debate.

Delusion? Cognitive dissonance? No, I’d say the psychological trauma and confusion the Greenies are going through in the wake of the COP21 debacle is far, far worse than that.

They make Japanese soldiers on remote Pacific islands still fighting World War II for Emperor Hirohito look informed and sensible; they make passengers on the listing Titanic worrying whether there’ll be enough ice for tomorrow night’s gin and tonic look sane and forward looking. They’re like the Jonathan Pryce character at the dark end of the Terry Gilliam movie, lolling brain dead in their chairs, completely away with the fairies and dementedly singing the movie’s title song Brazil – which is quite appropriate really, given that Brazil – Rio to be specific – was the place where all this climate nonsense started, what feels like a lifetime ago at the 1992 Earth Summit.

Meanwhile in the real world, reality looks like this: 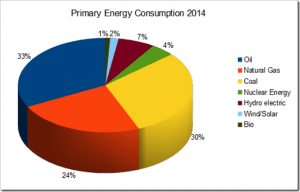 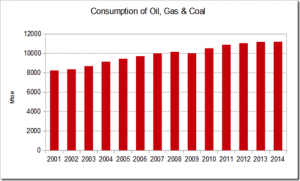 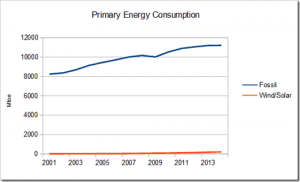 These charts – which come from the 2015 BP Statistical Review of World Energy – tell a story somewhat different from the narrative that has been pushed so assiduously in Paris over the last couple of weeks.

To most of you, I suspect, the significance of that story will be obvious. But for those whose qualifications only extend to stuff like environmental sciences, hoverboard and rape culture studies, ecology, transgender studies, Care Bear management or similar, let me explain very briefly what the problem is.

In the real world, people just do not care about the green crap any more. They thought they did, possibly, a teeny bit, a while back when the evidence seem to be suggesting that the world was getting hotter at the same time that carbon dioxide levels were going up and when climate scientists still seemed like credible, trustworthy people. But that hasn’t happened for nearly 19 years so that particular theory – anthropogenic global warming theory – is a busted flush.

Now the global economy just wants to get on doing what it has always wanted to do since the Industrial Revolution: grow!

And the way it’s going to do this – if China and India have any say in the matter: which as the world’s fastest-growing CO2-emitters they very much do – is through tried and tested and cheap and efficient fossil fuels, not through marginal, expensive, inefficient, unreliable renewable energy.

So all that remains for us to do over the next few weeks and months is to torment the greenies for their total idiocy, for their ludicrous wrongness and for their spectacular failure.