Breitbart News has obtained confirmation on State Department letterhead that Hillary Clinton did NOT sign a mandatory OF-109 “Separation Statement” when she left the State Department.

That statement would have required her to affirm that she had returned all classified materials in her possession. Clinton’s top aide Cheryl Mills also avoided signing a separation statement.

Additionally, Clinton never certified that she went through a mandatory security debriefing to learn how to handle classified information. State Department officials, meanwhile, admitted that they “mistakenly” mailed out sensitive information involving the Clinton case.

Clinton failed to sign a separation agreement when she left the State Department, around the time she was required to give back all of her classified materials. Clinton signed a “Classified Information Nondisclosure Agreement” on January 22, 2009. This document is known as an SF-312. It is standard for government employees to sign an SF-312 when they begin working in a role that gives them access to classified information. But she was also required to sign an OF-109, or “Separation Statement,” when she left the job.

That OF-109 document would have required her to affirm the following:

I have surrendered to responsible officials all classified or administratively controlled documents and material with which I was charged or which I had in my possession. I am not retaining in my possession, custody, or control, documents or material containing classified or administratively controlled information furnished to me during the course of such employment or developed as a consequence thereof…

But Clinton never signed an OF-109, even though the State Department Foreign Affairs Manual requires all employees to do so. The office of the Speaker of the House and others have been desperately trying to figure out if Clinton signed an OF-109. Now we know.

On September 11, 2015, researcher Larry Kawa received a letter from State Department official Clarence N. Finney Jr. from the Office of Executive Secretariat Staff (S/ES-S). Finney claimed that, “Departing secretaries of state do not complete an OF-109 due to their continued need for a security clearance after their resignation.” 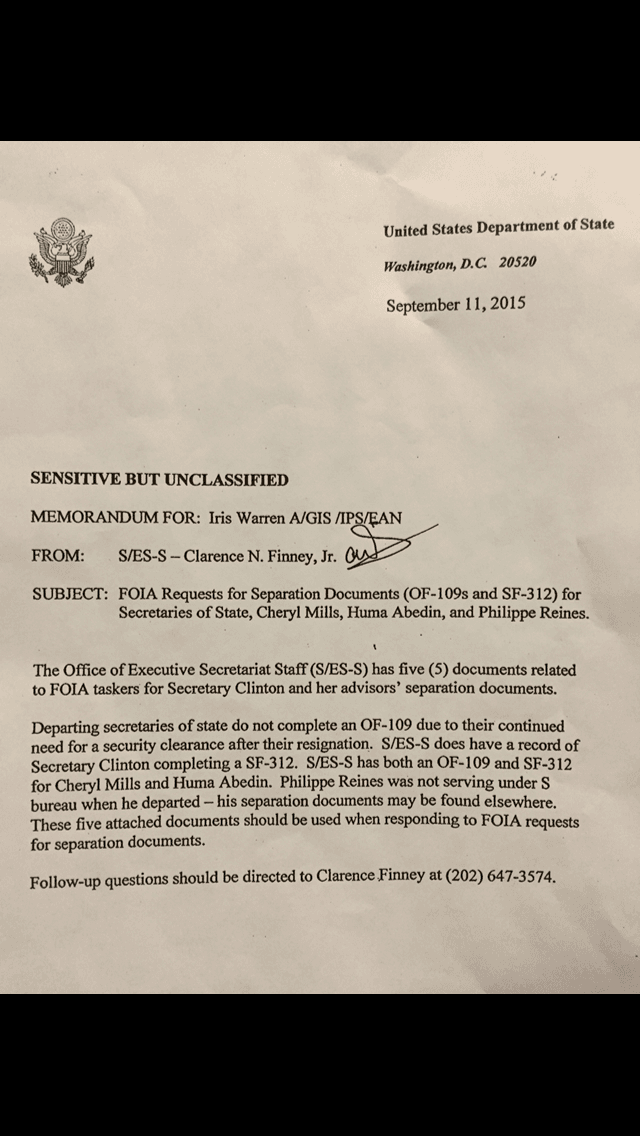 In other words, the State Department claimed that Clinton, as Secretary of State, was exempt from the requirement in the Foreign Affairs Manual. But Kawa was not satisfied.

Kawa wrote to State Department Office of Information Programs and Services director John Hackett on November 19 and asked, “Can you please forward me written documentation that allows for the exemption of the Secretary of State?”

“Mr. Kawa, I do not have this information at hand. I recommend that you submit an additional FOIA request,” Hackett replied. Kawa submitted another FOIA request two days later seeking evidence for the exemption, but his FOIA request was never returned.

The State Department’s Foreign Affairs Manual Volume 12 Section 564.4 is crystal clear that all employees must sign a separation agreement and undergo a security debriefing:

a. A security debriefing will be conducted and a separation statement will be completed whenever an employee is terminating employment or is otherwise to be separated for a continuous period of 60 days or more.The debriefing is mandatory to ensure that separating personnel are aware of the requirement to return all classified material and of a continuing responsibility to safeguard their knowledge of any classified information. The separating employee must be advised of the applicable laws on the protection and disclosure of classified information (see 12FAM 557 Exhibit 557.3) before signing Form OF-109, Separation Statement (see 12 FAM 564 Exhibit 564.4).

b. AID’s Office of Security, IG/SEC, will conduct a security debriefing upon the separation of AID employees.

Kawa asked State Department Office of Information Programs and Services litigation and appeals branch chief Brandi Garrett for the “pertinent exemption” that would have allowed Clinton to skip out on signing a separation statement, but Garrett did not provide any evidence to show that Clinton was exempt.

A Separation Statement exists for top Clinton aide Cheryl Mills, and a copy of it was quietly released by the State Department.

You might notice something fairly jarring: the statement was never signed, by Mills or anyone else. It was left blank.

Cheryl Mills, like Clinton, avoided having to affirm that she “surrendered to responsible officials all classified or administratively controlled documents and material with which I was charged or which I had in my possession.”

Citizen researcher Larry Kawa found the information during a series of exchanges with State Department officials in which the Department admitted to “mistakenly” mailing out sensitive information on the Clinton case.

On the evening of Friday November 13, 2015, Kawa received an email from Deputy Assistant Secretary of State Martha Grafeld. That same night, he received a voicemail message from State Department information officer John Hackett. Both Grafeld and Hackett told Kawa that he had been mailed sensitive information about Clinton and her aides. Even though Kawa had not received any information, the State Department officials seemed panicked.

They both asked him to return the sensitive information as soon as he gets it in the mail. They also both warned him not to disclose any of the information they thought he’d been sent.

Audio of Hackett’s voice mail message, reviewed by Breitbart News, referred to information that was “mistakenly” sent out:

Mr. Kawa, this is John Hackett with the Department of State. Area code [redacted]. The documents we recently mailed you relating to your FOIA request, um, these documents were mistakenly mailed to you without proper processing. They may contain, um, information that is exempt from public disclosure including Social Security numbers. We ask that you not distribute or disseminate these documents. We’ll be sending you an email to ask you to return these documents. Um, also we’ll be sending you a link where these documents that have been properly processed may be found. We regret any inconvenience. If you have any questions, please don’t hesitate to give me a call. Thanks a lot. Bye now.

I am writing to follow up on a phone call you received today.  In that call, our staff informed you that documents you recently received in the mail from the Department of State were mistakenly mailed to you without proper processing, as they include information that is exempt from disclosure, potentially including Social Security numbers.  The Department asked that you not distribute or disseminate these documents or copies of these documents.  Substitute documents that have been properly processed are posted at:  https://foia.state.gov/Search/Results.aspx?collection=HRC_NDAS.

We will forward to you a prepaid envelope to return to us the documents that were mistakenly sent and any copies you may have made. This return will be at no cost to you.

We regret any inconvenience that this may cause you and appreciate your cooperation.

Clinton’s lack of an OF-109 is especially relevant in light of her SF-312, a sworn agreement in 2009 that she made to return all classified materials “upon the conclusion of my employment”:

7…I agree that I shall return all classified materials which have, or may come into my possession or for which I am responsible because of such access: (a) upon demand by an authorized representative of the United States Government; (b) upon the conclusion of my employment or other relationship with the Department or Agency that last granted me a security clearance or that provided me access to classified information; or (c) upon the conclusion of my employment or other relationship that requires access to classified information. If I do not return such materials upon request, I understand that this may be a violation of Sections 793 and/or 1924, Title 18, United States Code, a United States criminal law.

Thus, Clinton violated her sworn SF-312 statement and could have violated the Title 18 sections cited in the agreement: Section 793, on “Gathering, transmitting, or losing defense information,” and Section 1924, on “Unauthorized removal and retention of classified documents or material.” If she is convicted of violating either of those sections, she could face prison time.

Clinton did not sign the second line on the bottom of the SF-312 document, the “Security Debriefing Acknowledgment.” The signature line was left blank. Thus, Clinton did not certify that she was debriefed on her security obligations regarding classified information.

The Hillary Clinton campaign and the State Department did not return requests for comment for this report.