“It’s an absolute fabrication. I’ve never said that, period,” Coburn responded. “It’s unfortunate he would use my name to say something dishonest. It’s a total fabrication.”

Dan Scavino, Trump’s social media director, reportedly posted a tweet quoting Coburn, saying, “He is, without a doubt, one of the most dishonest people in D.C.,” referencing Cruz. That tweet was then retweeted by Trump.

“However, the quote appears to come directly from progressive website ForwardProgressives.com and writer Allen Clifton, who used the exact language to describe Cruz,” the Washington Examiner reports.

“I’ve made no secret of my total disdain for Sen. Ted Cruz,” Clifton wrote. “He epitomizes everything that’s wrong with the Republican party. He is, without a doubt, one of the most dishonest people in Washington and, in my opinion, a complete sociopath.” 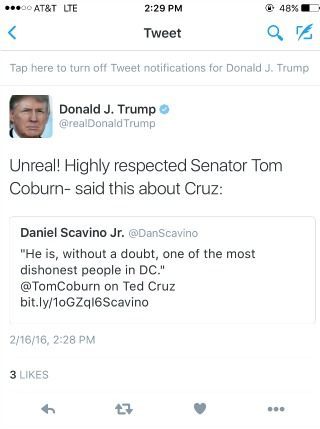 Cruz’s spokesman Rick Tyler responded to the incident, saying, “There is a reason ‘trumped up’ means phony.”

The Trump campaign has not responded to questions from Breitbart News about the Coburn quote.