The Obama administration returns very few migrant minors to their home countries, even though record numbers of unaccompanied minors have entered the United States illegally in recent years.

According to the Senate’s Subcommittee On Immigration and The National Interest, chaired by Sen. Jeff Sessions (R-AL), 96.4 percent  of the unaccompanied minors apprehended illegally entering the U.S. over the past two-and-a-half years remain in the country.

A mere 3.6 percent have been sent back to their home countries. 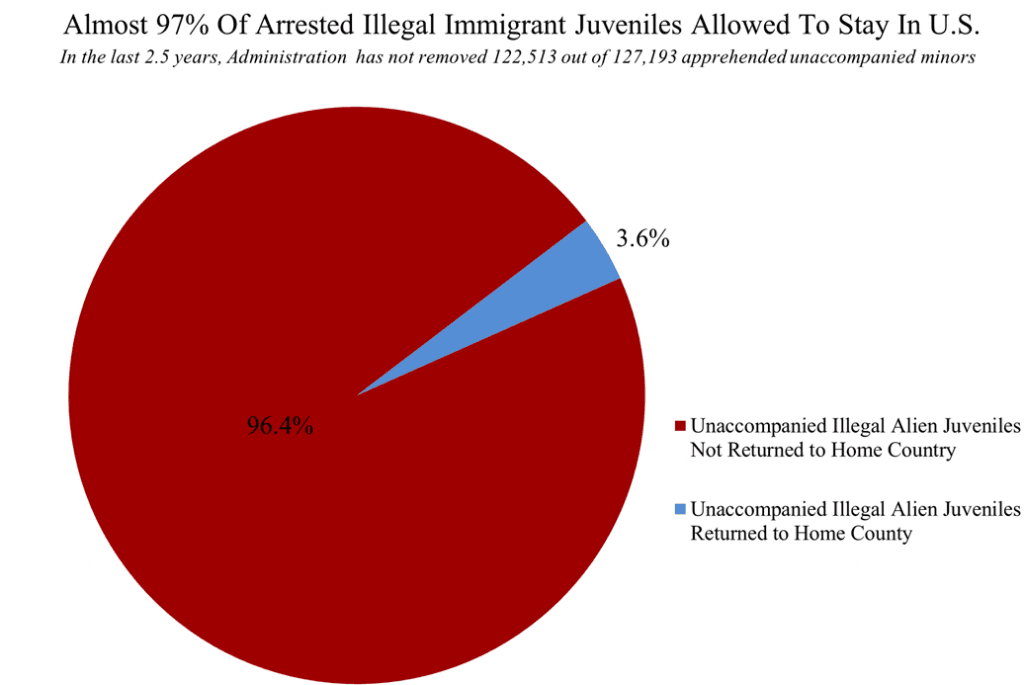 In other words, while 127,193 unaccompanied minors were apprehended illegally entering the U.S., just 4,680 have been send home in the past two-and-a-half years. The remaining 122,513 illegal immigrant minors are still in the U.S.

“Clearly, the overwhelming majority of these purportedly unaccompanied illegal alien juveniles are from Central America, and not Mexico – where it is easier to do a quick return (even though many are not),” the subcommittee wrote in its analysis. “Even if one assumes that all of the purportedly unaccompanied illegal alien juveniles from Mexico were immediately deported, it would still mean than only 4.8 percent of those who illegally entered during this period were removed.”

The subcommittee’s analysis additionally pointed to testimony offered this week by Tom Homan, an executive associate director at Immigration and Customs Enforcement, that higher deportation rates would help to reduce the continued influx of illegal immigration.

“In addition to this and other illegal immigration, each year the U.S. issues more than 1 million green cards, admits 700,000 guest workers, and allows  roughly 500,000 foreign students to study in the U.S. (and in some cases, to work, contrary to Congressional authorization),” the analysis concluded.