Senator Ted Cruz (R-TX) signaled early on that corruption would be one of the major themes of his campaign.

In the Republican debate on Thursday, he was able to explore that theme from two important angles: the corrupt intersection of Big Government and Big Business, and the devastation wrought by corrupt Democrat politics on the very city he was speaking in, Detroit.

For the former point, Cruz began with the Internal Revenue Service, which he has declared his intention to effectively “abolish.” He was challenged on this point by moderator Chris Wallace, who pointed out that even under a very simple flat tax system, there would still have to be an agency charged with collecting and verifying taxes.

Cruz responded by explaining his goal is to strip away the power and complexity that makes the tax system inherently corrupt, alluding also to the politicization of the IRS under Barack Obama, when the authority of its Tax Exempt Organizations division was used to suppress groups opposed to the President during his re-election campaign.

Cruz explained that his objective was to allow taxes to be filed on a postcard, which he has a picture of on his website: 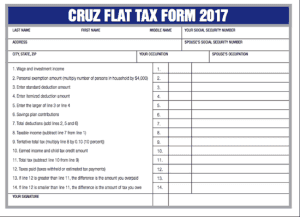 “When he we get rid of all the corporate welfare, all the subsidies, all the carve-outs in the IRS code, it dramatically simplifies it. And under Obama, the IRS has become so corrupt and so politicized we need to abolish it all together,” he explained. “Now, at the end of that there will still be an office in the Treasury Department to receive the postcards but it will be dramatically simpler.”

The inherent corruption of the current tax system is that it’s largely designed to compel behavior desirable to the government, through a massive system of rewards and penalties. A more honest tax system would be wholly focused on financing the essential operations of government with the minimum possible burden on American citizens, distributed as fairly as possible.

The complexity of the tax system is pure corruption in practice, because powerful interests can buy enough political influence to rewrite the tax code in their favor, to say nothing of the social engineers who use taxation as a compulsive instrument against the people.

Taxpayers with the resources to hire skilled accountants can exploit the tax system to minimize, and even largely eliminate, a burden which less wealthy taxpayers have no choice but to share. This is something the Left is prone to complaining about, as well as the libertarian Right, but the Left always offers the fraudulent “solution” of raising taxes instead of simplifying them, because liberal politicians derive so much power from granting their friends and favored constituents exceptions from tax law.

Such practices are no less corrupt because they are perfectly legal. Indeed, oppressive governments are eager to legalize corruption at every opportunity, to maximize the profits of the political class. This applies to many other aspects of Big Government beyond taxation.  As the State grows, arrangements that would have previously been viewed as rank corruption become standard practice. “Honest” business becomes all but impossible, because every businessman must pay off bureaucrats, and accept Big Government as his not-so-silent partner.

Cruz segued into this point, using his rival Donald Trump as an example.

He noted that Trump has, like many other politicians from both parties, made improbable promises he could balance the budget by cutting “waste, fraud and abuse.” Somehow none of that ever really gets cut, even though virtually every Democrat and Republican declares himself dedicated to slashing waste, fraud, and abuse at the first opportunity, year after year.

Cruz maintained that unlike Trump, he has a detailed plan for exactly what he wants to cut, saving $500 billion over 10 years.  (He does indeed have such a plan posted at his website.) Cruz does not pretend that cutting an average of $50 billion a year in purely wasteful spending, impressive as that might be, would balance the federal budget.

“It’s easy to say it, but one of the great disconnects to all the people, all of the voters, I understand the folks who are supporting Donald right now. You’re angry. You’re angry at Washington, and he uses angry rhetoric,” he said at the Republican debate.  “But for 40 years, Donald has been part of the corruption in Washington that you’re angry about.”

Trump, in both this debate and previous experiences, has talked about how making donations to politicians in both parties, especially the heavy hitters in top positions, was necessary to protect his business interests. Cruz later challenged that idea by attacking the notion that some of Trump’s donations, particularly to Clinton’s earlier campaigns, had any tangible relationship to his business enterprises.

It might also be said that Trump never quite gets around to denouncing the necessity of such donations, or explaining how he’ll end the perpetual Olympics of freestyle palm-greasing, while Cruz wants to make it a centerpiece of his campaign. To put it bluntly, there is no way to end government corruption without dramatically reducing its size and power, especially the kind of centralized power that can only be influenced by huge buckets of bipartisan palm grease.

Cruz brought the corruption theme around to Detroit in a memorable statement that makes one wonder why other Republican candidates aren’t using that tortured city – and peripheral disasters of Democrat governance like Flint, Michigan, which Cruz also discussed in the debate – as a club against left-wing opponents. No one in the Democrat Party really has an answer for what Cruz said Thursday night:

Let me start by observing that Detroit is a great city with a magnificent legacy that has been utterly decimated by 60 years of failed left-wing policy.

You know, Henry Ford revolutionized automobile manufacturing and brought automobiles to the middle class. During World War II, Detroit provided — funded the arsenals of democracy to help us win World War II. In — in the 1960s, Detroit was the Silicon Valley of America. It had a population of 2 million people, had the highest per capita income in the country.

And then, for 50 years, left-wing Democrats have pursued destructive tax policies, weak crime policies, and have driven the citizens out.

This city now has just 700,000 citizens. There are vacant homes, one after the other after the other. Crime has been rampant, and it is an outrage. And let me say to folks in the media: That is a story that the media ought to be telling over and over again, the destruction of left-wing policies and the millions who have hurt because of it.

Corruption of the most basic kind is a big part of the reason for Detroit’s woes, as generations of failed Democrat government drove out the tax base, and what funds remained were relentlessly misspent, or plundered. There’s no question the collapse of manufacturing hurt Detroit, but Cruz is absolutely correct that left-wing politics made it far, far worse than it needed to be.

He suggested addressing the manufacturing issue by easing the tax and regulatory burden:

As president, I will repeal Obamacare, the biggest job-killer in America.

I will pull back the federal regulators, the EPA and all the regulators that are killing small businesses and manufacturing.

And my tax plan, which is a very, very detailed plan on the website, tedcruz.org, is what’s called border adjustable. We get rid of all the taxes. We get rid of the corporate income tax and the death tax and the Obamacare taxes and the payroll tax. And we replace it with a 16 percent business flat tax that is border adjustable, which means all exports are entirely tax-free and all imports pay the 16 percent business flat tax. That’s a 32 percent differential.

It’s not quite as simple or dramatic as the populist appeal of tariffs and punitive taxation against outsourcing, offshoring, and corporate inversion, but the working man and woman would be well-advised to listen to what Cruz is suggesting.

A level playing field achieved by getting the boot of corrupt, incompetent Big Government off the necks of American business is vastly preferable to giving the government more boots to stomp on foreign competitors with, until everyone is equally handicapped… and the Ruling Class is rich and powerful beyond the dreams of ancient kings, because no one can invest a dollar without paying them five dollars in graft.

Our current political culture would think nothing of doubling the size of the tax code… but would scream like banshees at the notion of cutting it in half. There are a lot of powerful political and private interests who don’t want that system simplified. The very definition of corruption is that it’s hard to tell where the political interests end, and the private interests begin.