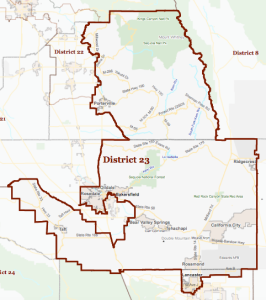 CA-23: This large Central Valley district takes in the town of Bakersfield, home of House Majority Leader Kevin McCarthy, one of the most moderate Republicans on Capitol Hill. It also includes part of northeast Los Angeles County. Despite a large Latino constituency and protests by activists, McCarthy held out against the “Gang of Eight” immigration bill in 2013. Defense is a big industry, and Kern County produces more oil than any county in the U.S..

Democrats: Sanders will have a small amount of support in the towns, but Clinton will consider the 23rd a lock.

Republicans: Cruz will win easily here — and will show his strength in other part of Los Angeles County as well.