Republican National Committee (RNC) chairman Reince Priebus will, on Monday, send a letter to former Secretary of State Hillary Rodham Clinton’s personal tax attorney Rorrie Gregorio, asking her if Clinton has paid the tax rates she expects billionaires and millionaires to pay — or if she’s not leading by example.

Under Hillary Clinton’s own tax plan, those making more than $5 million a year would be required to pay a surcharge to the treasury. In doing the math, since 2001, the Clintons would need to pay nearly $5 million more in taxes to comply with their own proposal. Clinton’s campaign tells Breitbart News she’ll pay that much just as soon as the RNC agrees to the rest of her policy agenda.

“As Hillary and Bill Clinton’s financial and estate planner, as well as their personal accountant, I am writing to you on this annual tax day to inquire as to whether Hillary Clinton has chosen to put her money where her mouth is, and pay the additional taxes she is hypocritically proposing that other Americans of similar income pay, but not said she is willing to voluntarily pay herself,” Priebus writes in the letter to Gregorio, a copy of which was provided exclusively to Breitbart News ahead of its public release.

Priebus’s letter to the Clinton tax accountant will come on tax day 2016, which this year is on April 18 rather than April 15.

“As a part of Mrs. Clinton’s tax policy proposals, she has called for an unprecedented new tax on Americans who earn more than $5 million annually,” Priebus continues:

This 4-percent “surcharge” would effectively create an entirely new tax bracket for people at the top 0.01 percent, such has herself. Since leaving the White House in early 2001, at a time when she claimed to be “dead broke,” the Clintons have earned at least $186,674,757 in taxable income. In 2014, the last year in which the Clintons have publicly released their tax returns, they earned $22,787,248, their highest single year of taxable income since being “dead broke.” With the Clintons’ tremendous income, I am calling upon them to fully embrace her new tax by applying the “surcharge” to her family’s previous income since 2001 when her family income has been in excess of $10 million on average annually.

The letter includes a chart that breaks down the Clintons’ taxable income since Bill Clinton left the White House in 2001, proving that in every year since then — except 2008 when Hillary Clinton ran for president and lost — she made several million dollars more than the $5 million minimum threshold for her new tax bracket. Technically speaking, during that more than 10 years since 2001, Clinton would owe nearly $5 million more in taxes under her own tax proposal. 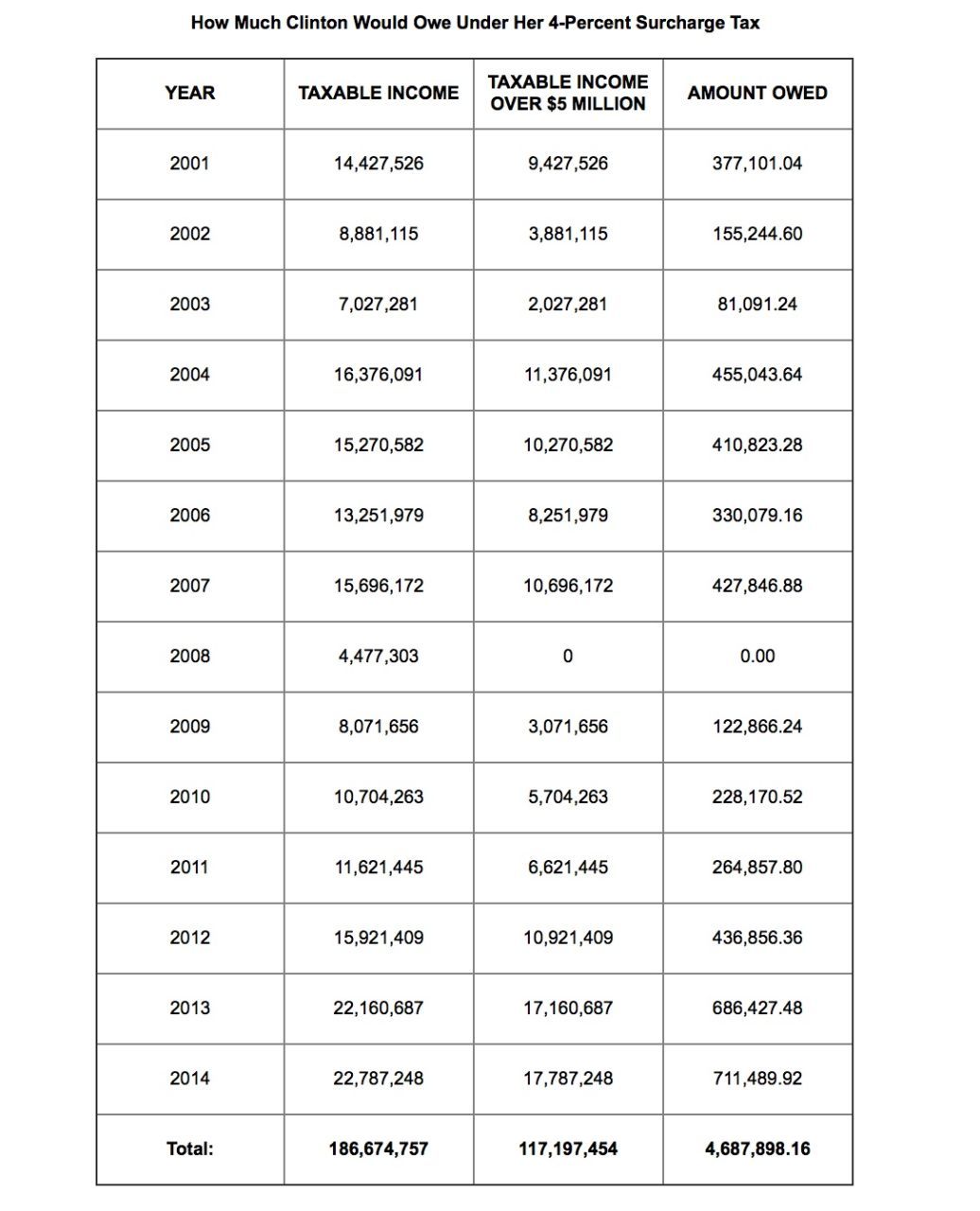 “Should the Clintons choose to put their money where their mouth is and pay Hillary Clinton’s proposed tax, she and her husband would owe the Internal Revenue Service a cumulative amount of $4,687,898.56 dating back to 2001. To pay the tax for 2014 alone, the Clintons would owe $711,489.92,” Priebus wrote to Gregorio. “As a member of the top .01 percent of American income-earners and a proponent of higher taxes, Clinton should practice what she preaches by sending the U.S. Treasury the over $4.6 million she would have owed under her new tax. In addition, it is imperative that the Clintons continue to lead moving forward, and pay this 4-percent ‘surcharge’ tax on their 2015 federal income tax filings and each year moving forward.”

In response, Clinton spokesman Nick Merrill told Breitbart News that Secretary Clinton will pay that much extra in taxes as soon as the GOP agrees to the rest of her policy positions.

“Sure thing, as soon as the RNC agrees to implement all of the rest of Secretary Clinton’s plans, including expanding the ACA, making college affordable, raising the minimum wage, closing corporate loopholes, passing paid leave, helping to achieve equal pay for women, holding gun manufacturers accountable, just to name a few things,” Merrill said in an emailed statement. “Happy that the RNC has stopped with their gimmicks and is interested in Democratic values, and best of all is so keen on implementing Hillary Clinton’s plans before she even takes office.”

Priebus specifically argued that if Clinton doesn’t end up paying the effective tax rates she’s calling for, and opts out of giving the IRS the extra $4,687,898.56 dating back to 2001, then it’s proof she’s a hypocrite.

“Mrs. Clinton has a particular obligation to honor her tax agenda considering her and her husband’s past and current use of the tax code,” Priebus writes:

Whether it was the improper use of interest deductions on their Whitewater real estate loans, or their current use of real estate loopholes to avoid fully paying the estate tax, another tax she seeks to raise, the Clintons can no longer hide their hypocritical penchant for gaming the tax system. The American people are tired of the Clintons playing by their own set of rules. I urge Hillary Clinton to put aside her family’s tax hypocrisy, put her money where her mouth is, and pay the IRS the costs of her own tax hiking agenda.