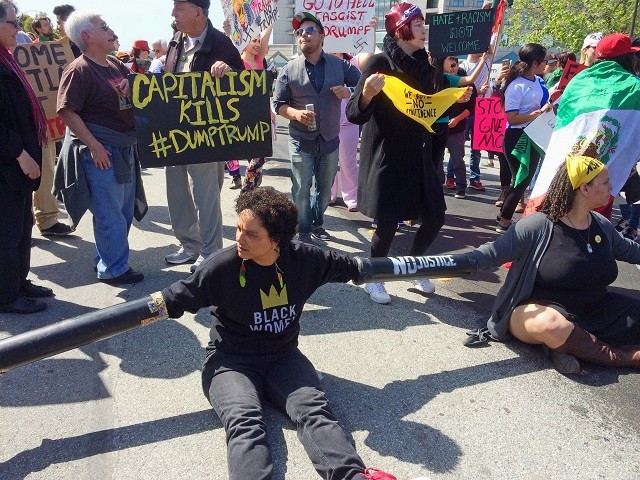 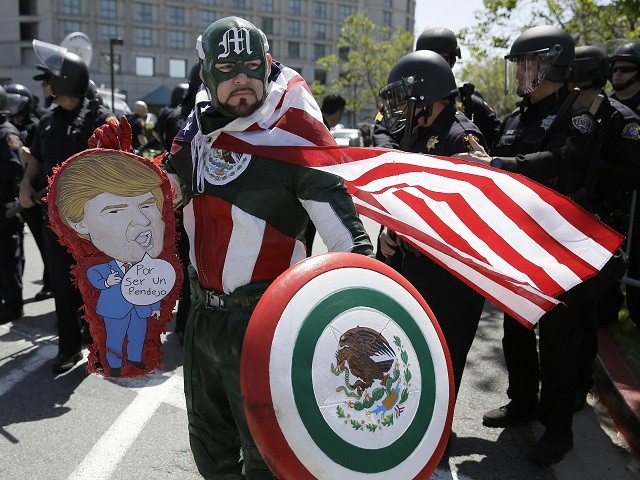 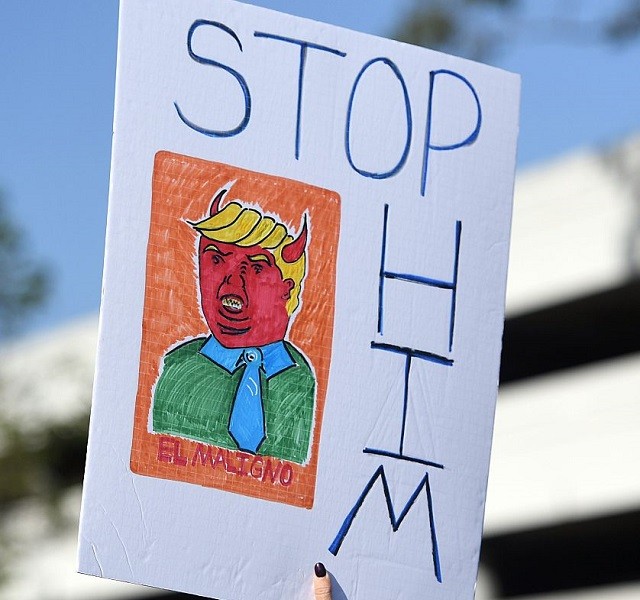 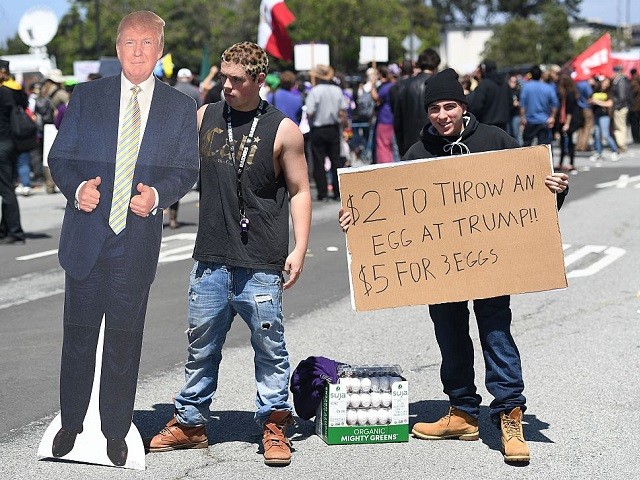 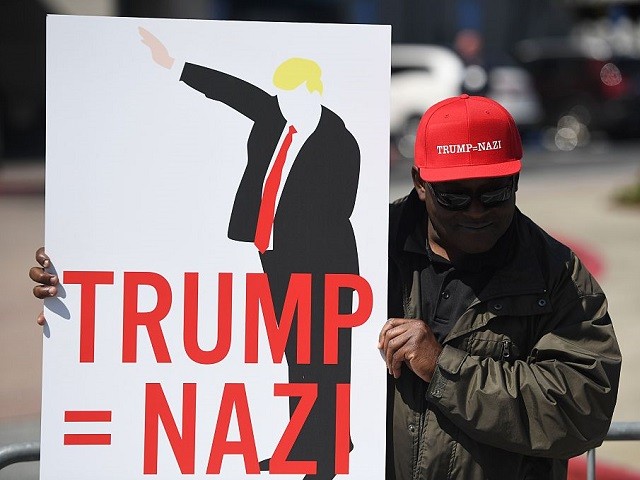 2:45 PM — Lee Stranahan: Video of a large group chanting “F*** Donald Trump.” Unclear if this is at the same Burlingame Hyatt; no riot police are visible.

2:19 PM — Ezra Dulis: This appears to be footage of protesters assaulting Mr. Conway, first seen in update from 1:40 PM.

Clip of us nearly getting caught in violence outside hotel during #TrumpProtest. pic.twitter.com/AMrPnJZSwk

2:13 PM — Lee Stranahan: More footage from flag burners: “Our ancestors would be proud of us right now, that’s fo SHO.”

Hundreds gathering to protest Donald Trump at the #CAGOPConvention pic.twitter.com/xAfFmQZbin

We just got told #Trump had to go in through the back door. #Protest #FuckTrump #California pic.twitter.com/SrciJQGQ7B 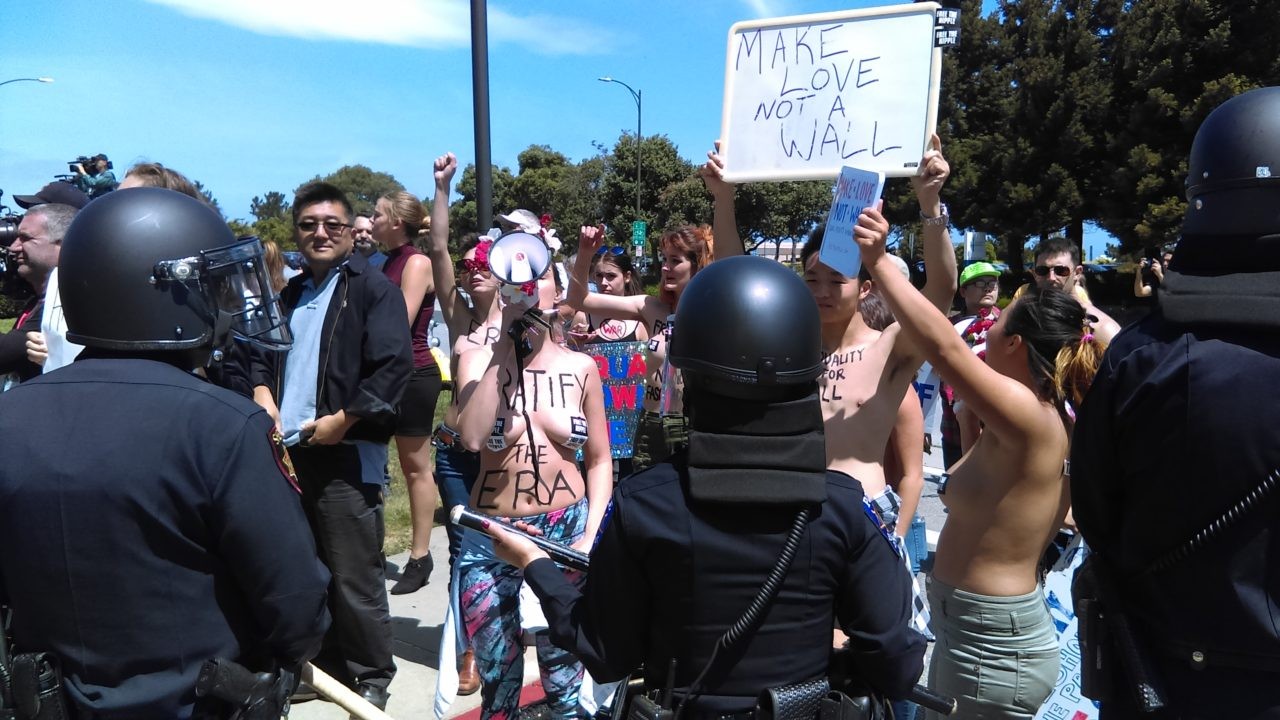 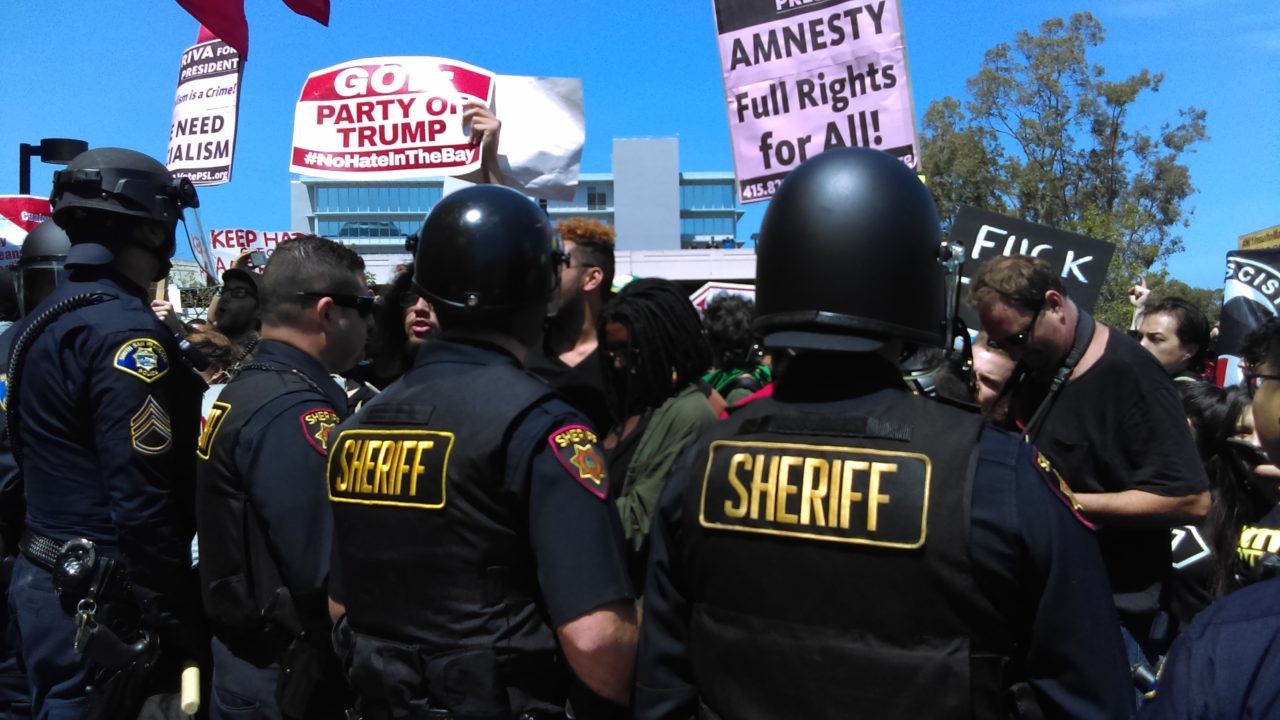 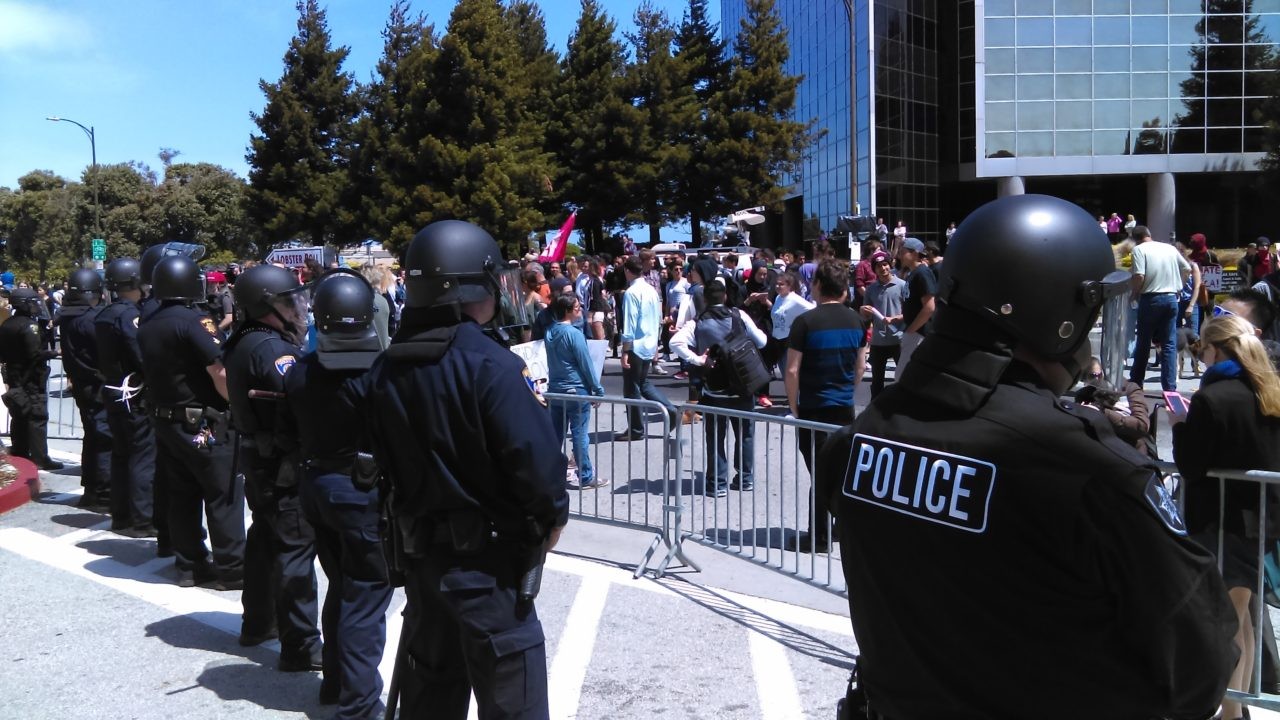 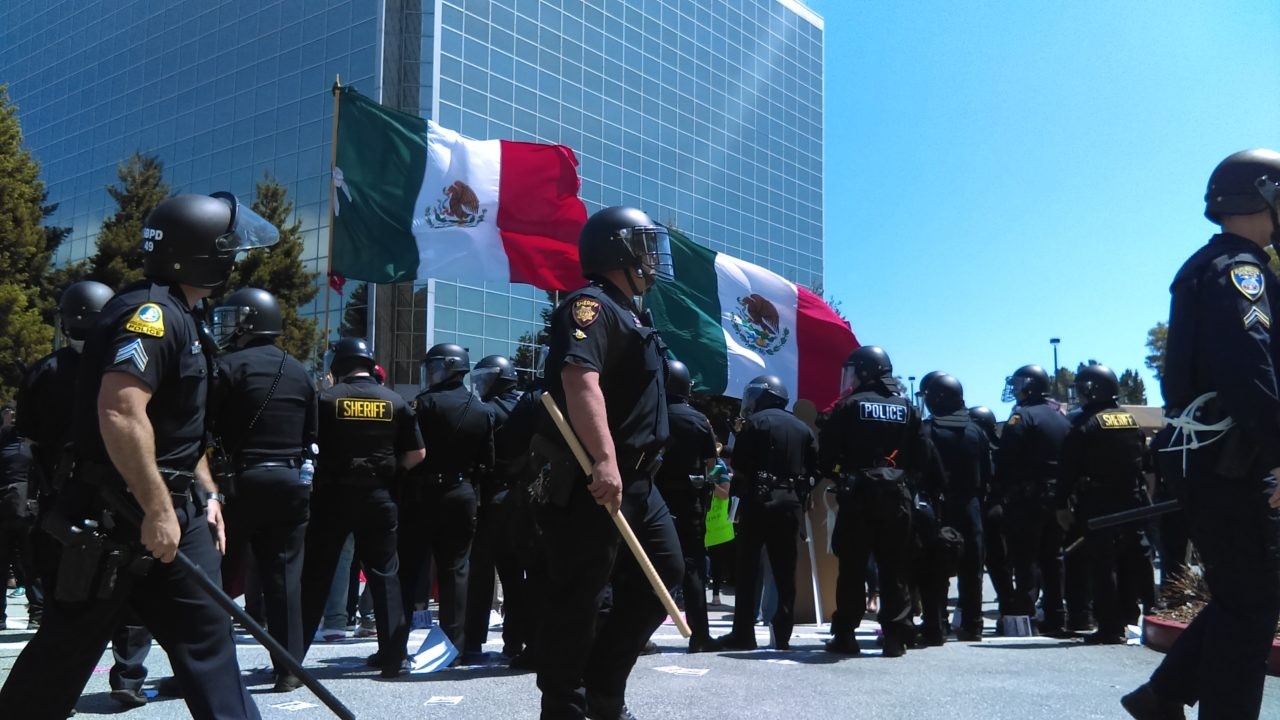 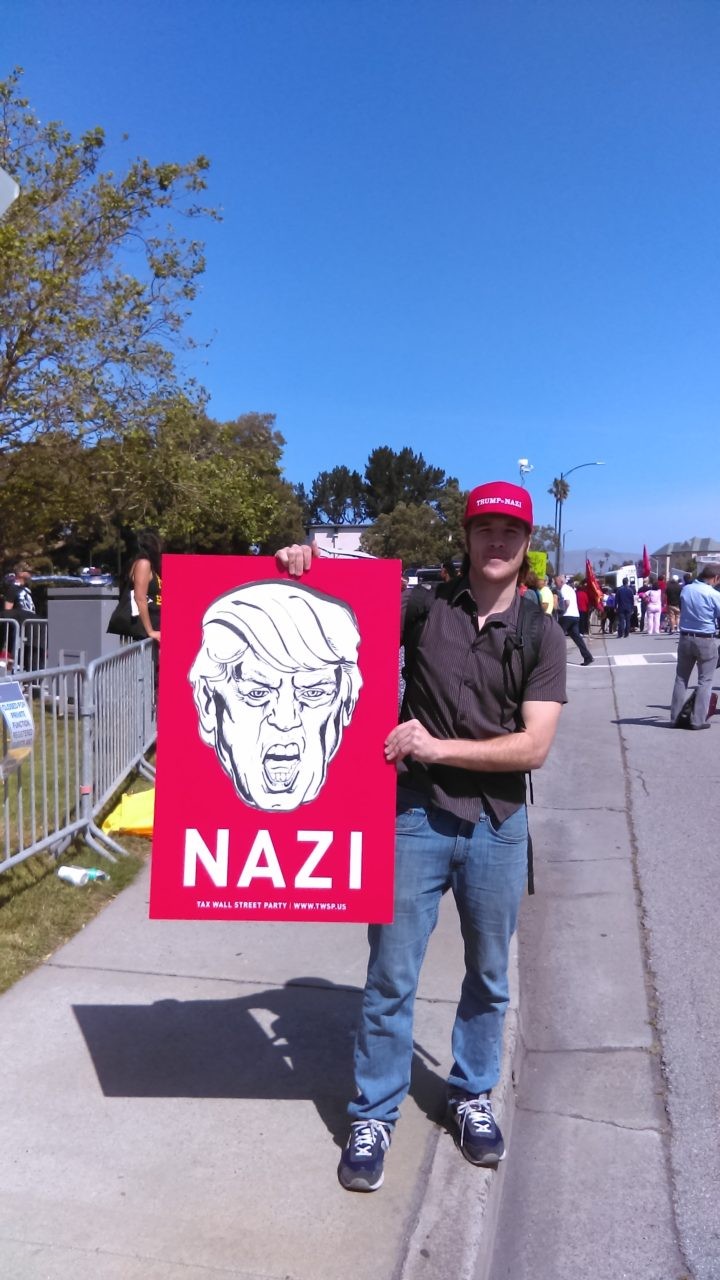 "We don't need a white man telling us that he's gonna build a wall in our land…we want him out!"#CAGOPconventionhttps://t.co/qkviXbP7vS

1:40 PM — Ezra Dulis: Convention attendee says protesters assaulted him on his way inside.

Christopher Conway says he was punched and kicked when he walked thru crowd to get into the #CAGOP convention pic.twitter.com/YMtwZaB7Ku

1:28 PM — Ezra Dulis: Another aerial view and a protest chant.

"Immigrant rights are here to stay, Donald Trump get out of the way" #CAGOP pic.twitter.com/1YkPzMTXcx

"Donald trump get out of the bay. Immigrant rights are here to stay"

This is the current scene outside of the Donald Trump event in California https://t.co/tzm2R7aiUu pic.twitter.com/vFpgRD5Oqk

1:21 PM — Ezra Dulis: Whether they love him or hate him, Trump can summon a crowd!

Protestors take over hotel parking lot while #DonaldTrump speaks inside at #CAGOPConvention pic.twitter.com/UaGuFjEAFA

Trump burning in effigy at the protest outside of his speech to the GOP state convention pic.twitter.com/XubbrLZym7

1:15 PM — Matthew Boyle: Trump: “There has to be unity in our party.” Also hammers low-energy Jeb Bush.

This little boy outside of the #CAGOPConvention has a message for Trump. pic.twitter.com/TAfDeRqWUc

"It's a rigged system" @realDonaldTrump says while speaking at #CAGOPConvention @BreitbartNews

1:04 PM — Lee Stranahan: Images and video of protesters outside the convention:

1:02 PM — Alex Swoyer: “That was not the easiest entrance,” Trump jokes. “Felt like I was crossing the border, actually.”

12:57 PM — Alex Swoyer: About 600 people at a sold out luncheon are dining, drinking, and chatting waiting for Donald Trump to take the podium at the California GOP Convention at the Hyatt in Burlingame, outside of San Francisco, California. The real estate mogul entered the ballroom roughly an hour after he was set to speak.

Before 9 a.m. a small group of protesters began to gather with one even coming through the door and chanting inside the lobby, but quickly was escorted outside. Sources tell Breitbart that by noon, thousands of supporters surrounded the Hyatt and police were in riot gear.

12:56 PM — Jennifer Lawrence: In a crowded room awaiting Donald Trump’s speech at the Burlingame Hyatt, where the California convention is currently being held, Jim Brulte, the Chairman of the California Republican Party, told convention goers that Donald Trump was running late to no fault of his own. A large group of protesters attempted to block Trump’s motorcade from reaching the convention for his speech.

Brulte remarked: “People who don’t believe in free speech just tried to block Donald Trump from getting to his speech.” He went on to congratulate the Burlingame police department for an outstanding job. He concluded, “I don’t have a lot of friends in the SF protest movement, so we are starting late.”