“The trick in this election and the key to California’s future is how to maximize all of the positive forces that are flowing through our country and embodied in this crowd,” said Clinton, who called America’s workforce the youngest and most diverse in the world. He promised that solar panels were going to become so cheap that they will be routine in every home in America. 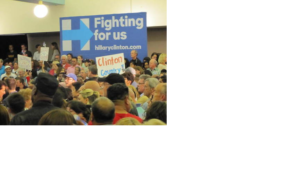 “The trick is how do you maximize the promise and minimize the peril? We have to have the strategy of shared prosperity, inclusive society and equal citizenship if we want to do that.”

“My case for Hillary is pretty simple, I think she has the best ideas to reduce inequality and increase opportunity,” said Clinton, who went on to speak of his wife’s political history on diplomatic and national security issues while she was Secretary of State. Former Sec. Clinton has come under intense scrutiny for her role in the 9/11 terror attacks in Benghazi, Libya. Emails showed Mrs. Clinton and her State Department knew that the spontaneous attack story was false before Susan Rice told it to the country.

“I think we have to realize that there are, we gotta do the right things, but there are two things  that could derail our progress, one is all the trouble in the rest of the world. The other,” he continued, “when I came here running for President in 1992….we had some problems, but nothing to compare with this.”

The former President raised the possibility of the European Union breaking up, the issue of foreign refugees, then joked while asserting that maybe countries liberated through the Cold War “don’t like Democracy so much, it’s a lot of trouble, maybe we should all be governed like Putin runs Russia. Of course not.”

A protester yelled out Bill Clinton’s name in what sounded like a call for a third term of Bill Clinton for President. His response was, “That’s not constitutional, but I’ll be there and I’ll work cheap, so that’ll be good.”

Clinton then spoke of last December’s terror attacks in San Bernardino, California. He did not use the word Islamic in describing the attack.

“The last serious terrorist incident in this country was in San Bernardino, not far from here. It was heartbreaking. It was propagated by two people who radicalized over the internet on social media. And the other day I was looking at a retired NATO Supreme Commander who now runs an institute at Tufts University,” said Clinton. He recalled the individual being asked about Donald Trump’s foreign policy speech. Clinton summarized the response: “We are not going to kill our way out of the challenges we face today.” Clinton continued summarizing, “We have to work our way out of it with defense, diplomacy and outreach.”

He asserted, “Hillary has been the most outspoken of all the candidates of any party against demonizing moderate, freedom loving, terror-hating Muslims…”

Clinton spoke of his wife’s intention to push for more public health insurance options. While he did not use the words centralized healthcare, what he described of Hillary Clinton’s health plan would move the country seriously toward such a system. Mrs. Clinton pushed for what what dubbed Hillary-Care

The former President also asserted that massive spending on biotech and the human genome under his administration and into the future means that many of the younger people in the room would live to be over 100-years-old.

“We have to empower our citizens and we cannot do it unless we have a Supreme Court who wants to expand government,” said Clinton.

He blamed Republicans for gridlock in Washington, then went on to say, “Everything Hillary has accomplished in Washington she had Republican support.” He further pushed the message of the Democratic presidential frontrunner that “She is the best single changemaker I have ever known.”

“California has been great to our family. And it was pretty good for you, I think, in those eight years when I had the privilege to serve” said Clinton.

Suggesting that Hillary still needs to garner support, he said, “You need to help her finish strong so we can win in November and put this country on the right path.”

Bernie Sanders supporters outside the venue expressed that they would never vote for Hillary Clinton and hoped for a contested convention. They said that the delegate vote count, where super delegates are included in frontrunner Clinton’s total, is not an accurate depiction of who the people are voting for.