The level of immigration — both legal and illegal — into the United States over the past two years has dwarfed previous levels and is now higher than it was prior to the 2007 recession, according to a new analysis of Census Bureau data.

The report, released Wednesday by the Center for Immigration Studies, reveals that in just two years (2014 and 2015) 3.1 million immigrants settled in the U.S., or 39 percent more than the prior two years.

“Several factors have likely contributed to the rebound, including cutbacks in enforcement, an improved economy, and the expansive nature of our legal immigration system (especially for long-term temporary visas such as guest workers and foreign students),” the report, authored by CIS Director of Research Steven Camarota, reads.

Of the 3.1 million new arrivals, the CIS report estimates that about 1.1 million were illegal immigrants, including recent border crossers, visa overstays, and migrants released from detention. The annual average of 550,000 new illegal immigrants is nearly twice as high as the average annual inflow of 350,000 logged in 2012 and 2013, according to the CIS. 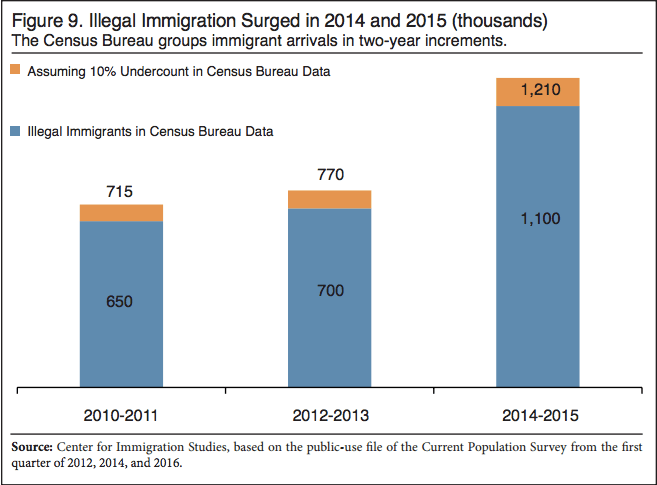 “The latest Census Bureau data shows that the scale of new immigration is clearly enormous,” Camarota writes. “The numbers raise profound questions about assimilation and the impact of immigration on the nation’s education system, infrastructure, and labor market, as well as the size and density of the U.S. population.”

Given the enormity of scale, Camarota highlights the importance of immigration as an issue for national debate.

“It is difficult to find a public policy that has a more profound impact across American society than the level of immigration,” he concluded. “It is certainly appropriate that immigration should be at the center of the current presidential election.” 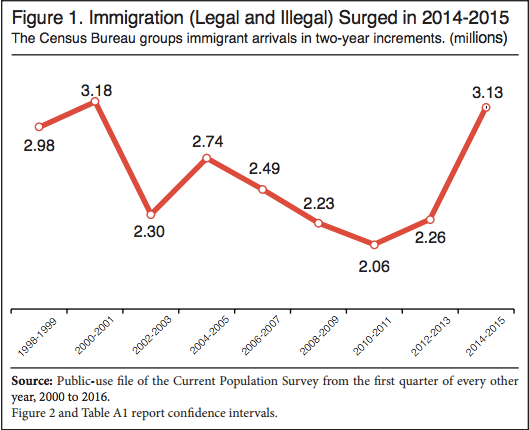 The vast majority of new arrivals in 2014 and 2015 were from Latin America and Asia.