Target’s CEO Brian Cornell refused to change course when confronted this week by shareholders who are alarmed by his expensive push for a transgender, mixed-sex changing-room policy that has helped wipe out almost 20 percent of the company’s value.

Cornell told the annual meeting of investors that the company intend to stick with the April 19 transgender policy — which requires its customers to use mixed-sex changing rooms and bathrooms — and he even insisted there has been no financial repercussions, despite a $10 billion Wall Street loss in the months since the policy was announced.

Cornell was pressed about the financial impact of the policy by investors, including Justin Danhof, the director of the National Center Free Enterprise Project.

“Target’s shareholder meeting was appalling from beginning to end,” Danhof said in a press release after the meeting.

Liberal corporate leaders such as Cornell throw around the words ‘diversity’ and ‘inclusion’ so much they are starting to lose their meaning. In addition to my question, two other shareholders also expressed concern over the company’s offensive bathroom policy. Cornell just kept repeating the same vacuous lines about diversity and inclusion. He doesn’t seem to get that he has offended the sensibilities of millions of Americans.

Danhof asked why Cornell claimed via the media that his pro-transgender policy is just like ordinary civil rights for black, and asked if Cornell thought everyone who stood against the store’s policy were like racists and were bigots.

The question is based on an interview the CEO gave to CNBC. “We’ve had a long history embracing diversity and inclusion. A couple weeks ago, one of our team members sent me a note reminding me that if we went back to the mid-60s, our company was one of the very first to use African-American models in their advertising, and back then, it wasn’t well received,” he said.

Danhof explained his exchanges with Cornell in a Breitbart interview.

My question dated back to last month when Cornell defended the company’s position and policy by comparing what they’re doing with their bathrooms to their 1960s era use of black models by claiming it wasn’t well received then. Well, that is shocking and appalling. What he is doing is making a moral equivalency of those who think his bathroom policy is outrageous and offensive today, so to those who oppose his bathroom policy he is basically comparing them to racists from the 1960s. And basically labeling everybody as a bigot.

Cornell wouldn’t answer the question, prompting Danhof to say, “So, by implication, of course he thinks everyone that disagrees with him is a bigot. Otherwise he would have said no.”

The CEO declined to answer questions over the pro-transgender policy posed by other investors.

Cornell was also asked if the company had conducted a cost-benefit analysis of the pro-transgender policy before issuing it. The CEO didn’t answer this question either.

Even if there’s other financial issues going on in the company, to claim that there’s zero correlation between that announcement and an 18 percent stock drop in seven weeks, that borders on fiduciary negligence. It just goes to show that they’re perfectly willing to lie to their investors. It’s shocking that they would claim that there’s no correlation there. 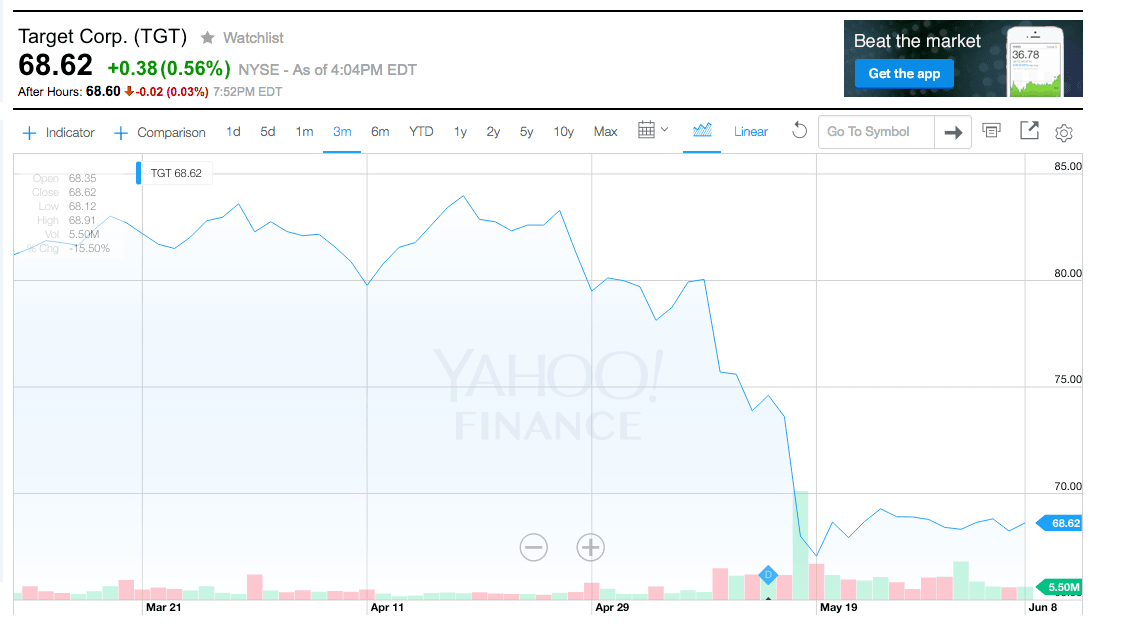 “We observed a noticeable fall off in traffic at Target during the last week in April and a meaningful pickup at Walmart during that same time,” Richard Chmiel, chief executive of RS Metricssaid. “We suspect the bathroom boycott which was gaining momentum at that time contributed to the shift,” Chmiel added.

According to The Street, “Target’s second-quarter guidance rattled investors. The company expects earnings between $1 and $1.20 a share, compared with a previous consensus estimate of $1.36 a share.”

For his part, Danhof said he’s never seen such a dismissive attitude from a company. “If you disagree with their position on diversity and inclusion that means nothing [to them]. It seems, at least from my perspective, if you disagree with them, they don’t want you around,” Danhof concluded.