Shortly after President Barack Obama set wheels down Saturday in Hangzhou, China his National Security Advisor Susan E. Rice, members of his entourage and the press corps tangled with Chinese officials both on the flight line and at the West Lake State House minutes before Obama’s meeting with Chinese President Xi Jingpin. 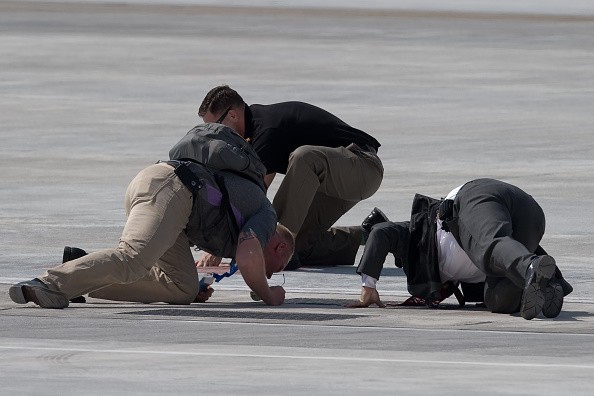 US security personnel inspect parts of the airport prior to the arrival of US President Barack Obama (not pictured) at Hangzhou Xiaoshan International Airport in Hangzhou on September 3, 2016.
World leaders are gathering in Hangzhou for the 11th G20 Leaders Summit from September 4 to 5. / AFP / NICOLAS ASFOURI (Photo credit should read NICOLAS ASFOURI/AFP/Getty Images)

“A bit of chaos on the Tarmac,” read the feed from the White House press pool report by Wall Street Journal reporter Carol Lee.

Pool was brought under the wing of AF1 per usual but the scene was not per usual. There were no stairs to the top door to AF1, instead President Obama exited via the lower level stairs so pool could hardly see him, and only for a split second as he exited at 2:30 p.m. A member of the Chinese delegation was screaming at White House staff from the moment pool got onto the tarmac. He wanted he US press to leave. The Chinese had put up a blue rope under the wing so pool had to stand behind it. This man was demanding the pool, which was behind the blue rope, get away from the arrival scene altogether. At one point a White House official told him this was our president and our plane and the press wasn’t moving.

Chinese gov put rope under AF1 to keep press from Obama arrival in Hangzhou, yelled at WH officials to bar US pool pic.twitter.com/JeRA09jews

Lee wrote this assertion by the White House staffer did not go down well: “The man yelled, ‘This is our country.” He yelled at another White House official and got testy with Susan Rice and Ben Rhodes, seeming to try to block them from walking closer to the arrival scene after they lifted the blue rope and walked to the other side of it, nearer to POTUS.”

Obama was meeting with Xi and Ban Ki Moon, the secretary general of the United Nations, at the West Lake compound to formally accept the UN’s Paris Agreement on Climate Change, which is being trumpeted in the Chinese media as a huge diplomatic achievement for Xi. 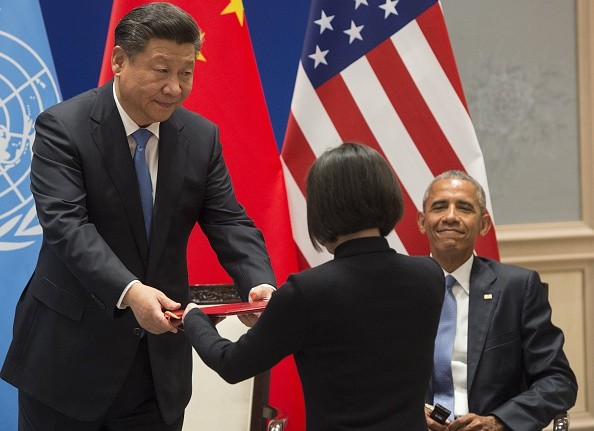 Chinese President Xi Jinping (L) holds the Chinese documents to formally join the Paris Climate deal alongside US President Barack Obama as both countries formally join the Paris Climate deal at Ruyi Hall at the West Lake State House in Hangzhou on September 3, 2016.
The United States and China on September 3 formally joined the Paris climate deal, with US President Barack Obama hailing the accord as the “moment we finally decided to save our planet”. World leaders are gathering in Hangzhou for the 11th G20 Leaders Summit from September 4 to 5. / AFP / SAUL LOEB (Photo credit should read SAUL LOEB/AFP/Getty Images)

The White House press corps has a rotating duty, where its members take turns writing up notes in situations when it is impracticable for the entire press corps to cover an event.

As the president walked down the red carpet, Lee wrote that the Chinese lined both sides of Obama’s path to his limousine, so that there was no way to take photographs or shoot video footage. 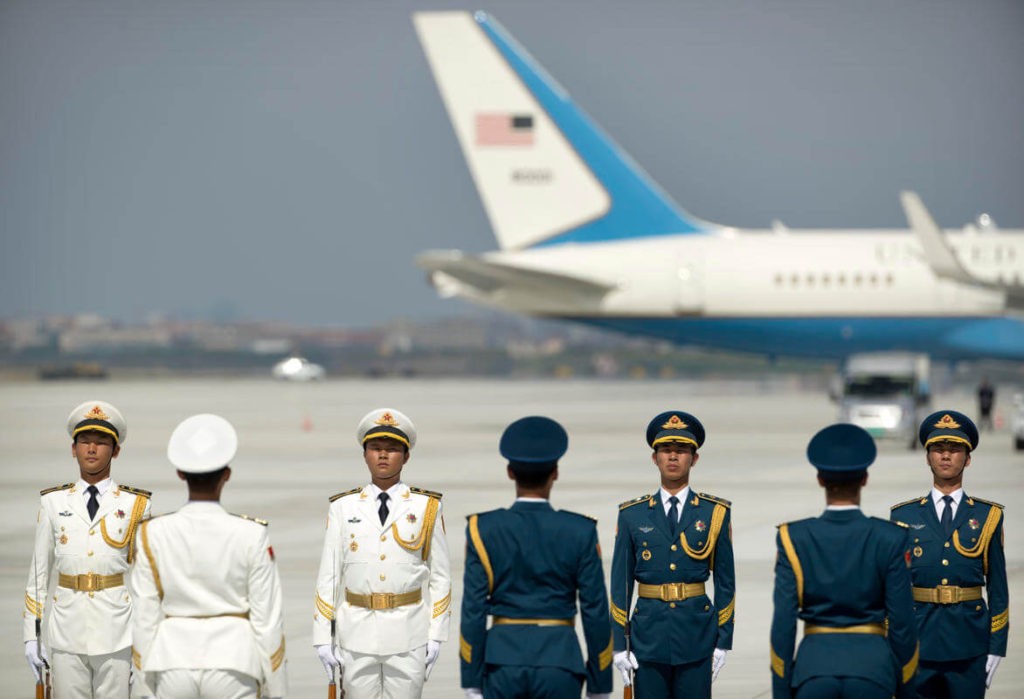 “Motorcade was rolling within minutes after that warm welcome,” Lee wrote.

Later, before the president arrived at the West Lake State House, a reporter asked Rice what happened at the airport and Rice replied, “They did things that weren’t anticipated,” according to the White House pool report.

The tension between White House staff and the Chinese officials erupted again at the meeting site along West Lake, when the White House advance team, staffers, and the press pool were stopped at the security gate to the compound, wrote William Wan, a reporter from The Washington Post, who took over the pool report duties from Lee.

At the same time as the confrontation at the gate, another group of the president’s advance staff, protocol and Secret Service officers who attempted to enter the compound through another entrance, “spent 15 mins in heated arguments with Chinese officials,” the pool report said.

The account continues as the arguments between Chinese officials and White House staff nearly broke out into fisticuffs:

But, hold on, sports fans. The action was not over yet.

As soon as the White House communications staff entered the state house, the arguments started up again, when the White House press officers lobbied for the traveling press corps to gain entry, the pool report said. “You are only allowed 10,” said a Chinese official.

Apparently, 10 was not the correct answer. “That’s not right,” the pool report quotes the White House press official. In fact, two reporters who had traveled with the president were left outside.

The shouting did not abate, the report said.

Twenty minutes before Obama’s arrival, U.S. press officers were still arguing in the room where the two presidents would soon be meeting along with Ban Ki Moon to talk of their cooperation. As U.S. official a pleaded for two U.S. journalists left outside to be allowed to stand in the back of the room. “There’s space. They are print reporters. They would just be just standing,” said one White House press officer.
It was a fight they did not win.

Later, Wan was able to report, “Just to make sure: Last two reporters mentioned in precious pool report got in. (Thanks to our valiant press handlers)”

The president, in China for the G-20 summit — which is the meeting of heads of state and other officials from the 20 largest economies: Argentina, Australia, Brazil, Canada, China, France, Germany, India, Indonesia, Italy, Japan, Mexico, Republic of Korea, Russia, Saudi Arabia, South Africa, Turkey, the United Kingdom, the United States and the European Union–as well as guest nations and the International Monetary Fund, the World Bank, the World Trade Organization, the Financial Stability Board, the International Labor Organisation, and the Organisation for Economic Co-operation and Development.