Hillary Clinton is calling off plans to visit California on Monday and Tuesday following her collapse at the 9/11 memorial.

From the Associated Press:

WHITE PLAINS, N.Y. — Hillary Clinton is calling off plans to visit the West Coast on Monday and Tuesday following a health episode at the 9/11 memorial.

Clinton abruptly left the anniversary ceremony on Sunday morning and needed to be held up by three people before she appeared to stumble off a curb and was helped into a van.
Several hours later, her campaign revealed she was diagnosed with pneumonia on Friday and advised to rest.

Her doctor said Sunday evening that Clinton had become overheated and dehydrated at the event in lower Manhattan. Dr. Lisa R. Bardack says Clinton is now ‘‘recovering nicely’’ at home.

No answers on whether Clinton will attend west-coast fundraisers. To reiterate, she has no public rallies scheduled until Wednesday.

Aides still unclear on whether Clinton will amend her schedule. She is slated to fly to SF tomorrow for a fundraiser, LA later that night.

A close up of Hillary Clinton's collapse shows her foot dragging and unresponsive suggesting lack of consciousness https://t.co/2RIsuDzB9X

Clinton’s doctor says she was diagnosed with pneumonia — on Friday.

Even as reporters waited for more details about the health scare, supporters – for the first time – were quietly pressuring a candidate who has been reluctant to share details about her health and personal life to become more transparent to avoid a drip-drip of doubt that could help an even less forthcoming Trump.

“The Clintons have this notion that they only go as far as they need to” in terms of disclosure, said an ally close to the former president and current Democratic nominee. “They can’t afford to approach this that way.”

CNN’s MJ Lee says that the Clinton campaign has been silent for hours since its initial statement. She quotes a law enforcement official as stating she “appeared to faint.”

Twitter’s Trending section has not included any phrase regarding Hillary Clinton’s collapse outside New York City’s 9/11 memorial service Sunday morning, despite capturing the attention of reporters across the political spectrum and spawning multiple hashtags.

CNN’s Dylan Byers reports on the frustration from Clinton’s press pool that they were shut out of covering exactly what happened this morning:

With less than sixty days until the election, neither Clinton nor Donald Trump has allowed for what’s known as a “protective pool,” a rotating group of reporters that travel with a candidate in order to provide a minute-to-minute account of their activities.

Vox’s Jeff Stein agrees that today’s events will lead to more pressure on Clinton and Trump to release their medical records.

Calling this the “central debate” of the presidential election may be a step too far. But at the very least, it suggest [sic] we’ll hear increased calls for both Clinton and Trump to release their full medical records as November draws near.

David Usborne, Chief North America correspondent for The Independent, writes: “Hillary Clinton must reassure an uncertain nation that she is in good medical shape after 9/11 memorial scare.”

We know where slipping and sliding and pretending nothing is awry gets you. The mess over the private email server you used while Secretary of State wouldn’t still be the number one preoccupation of your political enemies if only you hadn’t been so reluctant to admit your errors at the outset.

It seemed awfully like you might be doing something similar when you emerged from your daughter’s apartment building at noon on Sunday and declared breezily that it was a “beautiful day in New York”. Trying to distract the media from the issue at hand with comments about the weather won’t work.

If humans were rational creatures, the time and place of Clinton’s “overheating” wouldn’t matter at all. But when it comes to American psychology, there is no more powerful symbol of terrorism and fear than 9-11 . When a would-be Commander-in-Chief withers – literally – in front of our most emotional reminder of an attack on the homeland, we feel unsafe. And safety is our first priority. 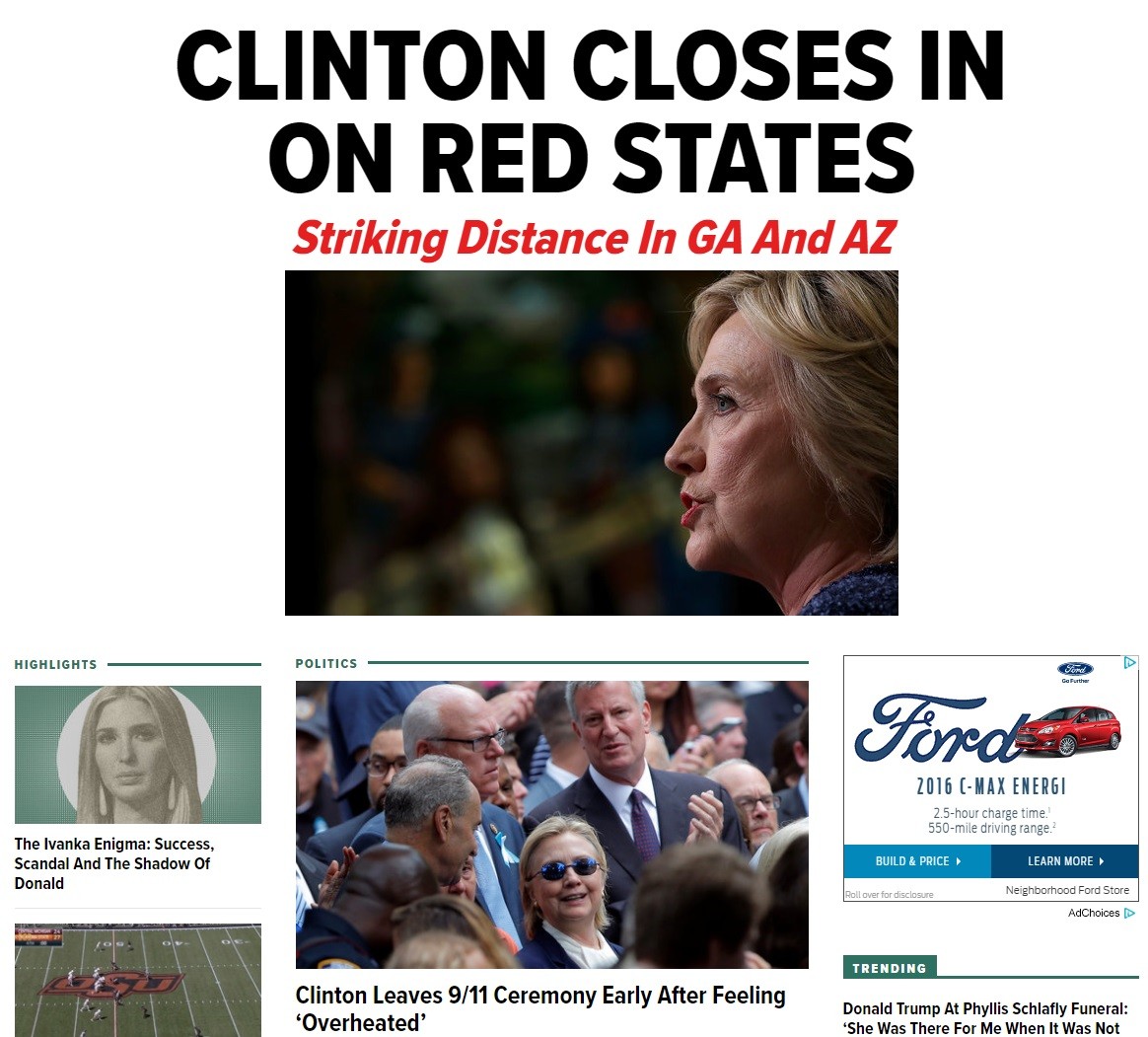 Sunday on NBC’s “Meet The Press,” while commenting on Democratic presidential nominee Hillary Clinton having to leave during the 9/11 memorial service, former NBC’s “Nightly News” anchor Tom Brokaw said of Democratic presidential nominee Hillary Clinton, “I think that she should go to a hospital, see a neurologist, and get a clean report if it is available to her.”

Drudge picks up on this tidbit from the New York Times:

A campaign spokesman didn’t immediately respond to questions about whether Sunday’s incident was related to her medication or allergies.

Amy Chozick, co-author on this report, penned a piece Tuesday that altered a quote from Clinton herself about taking a “load” of antihistamines, as she blamed allergies for her four-minute coughing episode at a Cleveland campaign rally.

Dr. Raymond Pollak — who describes himself as a political independent, and is the father of Breitbart editor Joel B. Pollak — describes how he would diagnose a patient exhibiting symptoms like today’s fainting episode.

Work up for a 68 year old female who faints includes a thorough physical/neurological/cardiology evaluation; and going through the algorithm of:

In the ER, the competent clinician would examine her thoroughly and run a series of blood tests, EKG, as well as a CT/MRI of the skull. Overnight observation might be necessary depending on the clinical circumstances.

At least, this is the protocol for the average citizen. Whether Mrs. Clinton will receive this kind of evaluation or be pandered to and receive the “usual” awful care of the rich and famous remains to be seen. At the very least, reassurance from a recognized and competent medical authority will be necessary to reassure the country that her health is no impediment to her candidacy for the highest office in the land.

Video of Hillary’s vehicle in Chappaqua.

Hillary Clinton has just arrived back at her home in Chappaqua, per @MattJClaiborne

Rep. Peter King (R-N.Y.), who was with Trump at the ceremony, tells me Trump was quickly informed about Clinton, soon after she left.

King: “It was actually Trump who told me what was going on. He leaned over & told me that ‘Hillary wasn’t feeling well.’ I said, ‘Really?’"

What [Nick Merrill’s] statement leaves out is that a) it came 90 minutes after Clinton left the ceremony b) reporters — or even a reporter — were not allowed to follow her and c) the temperature in New York City at the time of Clinton’s overheating was in the low 80s. (A heat wave over the eastern United States broke last night/this morning.)

Five days ago, Chris Cillizza at the Washington Post: “Can we just stop talking about Hillary Clinton’s health now?”

Brutal description of the van entry:

Clinton’s press corps in the dark.

Per pool campaign says Clinton is going home to chappaqua. Reporters are still holding in manhattan. No word on if she saw a doctor

CNN political contributor Bakari Sellers admits: “Does she need to provide more [medical records]? That is a legitimate question to ask.”

CNN reports Clinton is headed to Chappaqua. She does not have any campaign rallies scheduled until Wednesday, September 14th.

Clinton walks unassisted for the cameras outside Chelsea’s apartment. 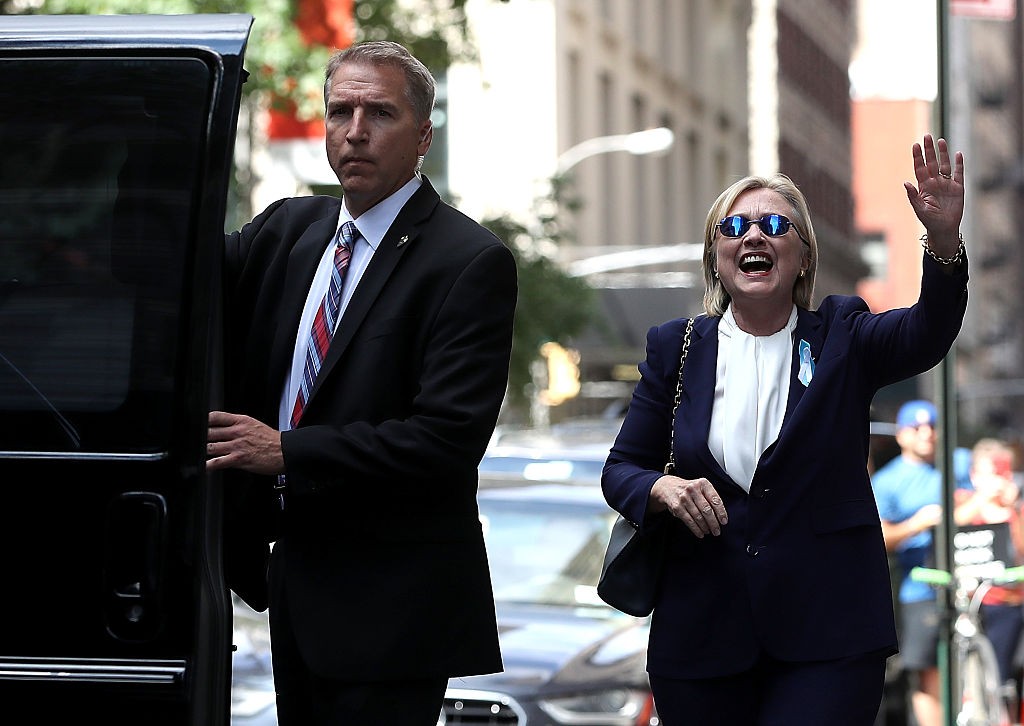 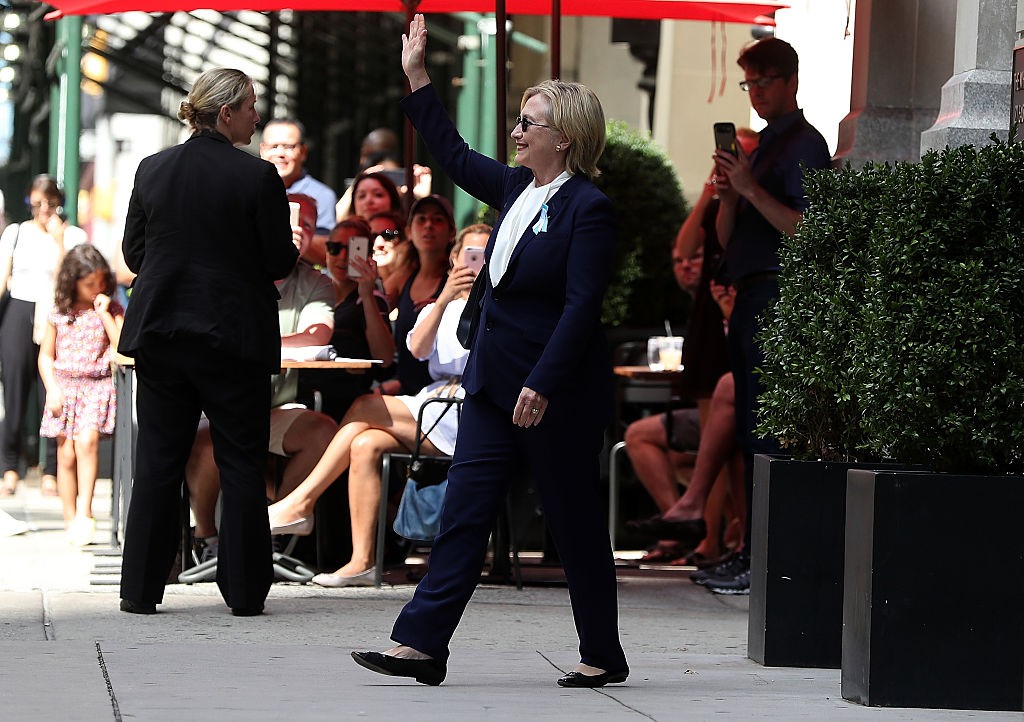 Cheers as Hillary leaves Chelsea Clinton’s apartment. “How are you feeling, Secretary Clinton? Are you feeling better?” A reporter asks. “Yes, thank you very much,” Clinton responds.

Here is Hillary Clinton leaving Chelsea's apartment. (A little girl came up to give her a hug) pic.twitter.com/VreSXmT1Yh

So, Martin Shkreli, former CEO of Turing Pharmaceuticals, was outside for Clinton's apartment departure pic.twitter.com/jdrmDci3ln

He shouted, "Why are you so sick!" when Hillary Clinton walked out. https://t.co/KQptaCy6MO

In addition, according to Politico Playbook quoting USA Today’s Eliza Collins–Clinton’s pool reporter on Sunday–“the campaign kept her in the dark about Clinton’s whereabouts.”

More media are confirming that Hillary Clinton had a medical episode.

.@HillaryClinton was helped into a van when she fainted and @realDonaldTrump was informed about it before others, @jamesfordtv reports.

Clinton left the 9/11 ceremony 30+ mins ago but press pool was not told to where. Aides now not responding to any Qs about her whereabouts

And now even the Clinton campaign confirms that she indeed did have a medical episode.

UPDATE: Clinton campaign says she had to leave 9/11 ceremony because she felt "overheated" https://t.co/fDhXIL5W8Z pic.twitter.com/tycSoDWxIl

Clinton spokesman Nick Merrill issued the statement that she was “overheated” and “departed” to head to her daughter Chelsea Clinton’s nearby apartment, according to CBS News.

“Secretary Clinton attended the September 11th Commemoration Ceremony for just an hour and thirty minutes this morning to pay her respects and greet some of the families of the fallen,” Merrill said. “During the ceremony, she felt overheated so departed to go to her daughter’s apartment, and is feeling much better.”

A producer for Lawrence O’Donnell’s MSNBC program, The Last Word, has also heard from multiple law enforcement sources that Clinton had a “medical episode” at the 9/11 memorial.

Breitbart News has obtained video of a Hillary Clinton staffer, pool press secretary Varun Arund, saying he does not know what was happening with his own candidate at the 9/11 memorial.

“Is the motorcade still here?” a female reporter asked Arund.

“I don’t have any updates,” Arund, Clinton’s spokesman, said. “Sorry.”

The video, which was shot by Breitbart News’ Jennifer Lawrence, ends with the female reporter confirming that the Clinton campaign has blocked reporters from leaving the area they were kept in.

“Since we can’t walk to the street…” the female reporter said, before the video cuts off.

The Clinton campaign has not responded to press inquiries about why Hillary Clinton suddenly departed the 9/11 memorial unexpectedly.

Hillary Clinton spokesman Nick Merrill–and the Clinton campaign–have not responded to multiple requests for comment from Breitbart News. According to multiple Breitbart News reporters on the scene, other media outlets are aware of what happened with Clinton–but are refusing to report the details thus far. More details are forthcoming.

Ed Henry is reporting that Hillary Clinton’s campaign is purposefully keeping reporters in the dark.

The original story by Mona Salama begins below.

NEW YORK CITY — Democratic presidential nominee Hillary Rodham Clinton reportedly fainted on the way to her van after she abruptly left the 9/11 memorial ceremony at Ground Zero of the attack on the 15th anniversary, having to be helped into her vehicle by a protective detail.

Clinton, who was here and only about 20 feet away from Republican presidential nominee Donald J. Trump, was listening along with Trump to the reading of the names lost in the terror attacks on this tragic day 15 years ago. Trump appeared at the ceremony around 8:20 a.m. receiving applause when he arrived, while Clinton arrived shortly before the first bell rang at 8:46 a.m. which is a citywide moment of silence in observance of time the first plane struck the North Tower. Shortly before 9:37 a.m.–the time marked for a moment of silence in observance of the flight that struck the Pentagon down just outside Washington, D.C.–Clinton was seen leaving the ceremony with her press corps in tow. Clinton was leaving through a back entrance, quietly.

Several reports have surfaced since Clinton abruptly left the 9/11 memorial ceremony that she had a medical emergency and fainted on the way to her car. Her U.S. Secret Service protective detail actually had to help carry her into her car, according to a Fox News report from Rick Leventhal.

A witness told Leventhal that Clinton ditching the ceremony was an “unexpected” early departure, and that her “knees buckled” as she stumbled off the curb and lost a shoe when she fainted.

MORE ON #HILLARY per witness: "unexpected early departure"; she stumbled off curb, "knees buckled", lost a shoe as she was helped into van