Twitter’s Trending section has not included any phrase regarding Hillary Clinton’s collapse outside New York City’s 9/11 memorial service Sunday morning, despite capturing the attention of reporters across the political spectrum and spawning multiple hashtags.

Neither #HillarysHealth, nor #ClintonCollapse or any other related hashtag has appeared in either the worldwide or US trending sections on the social media site. As of this writing, one “Worldwide” trend is included on the list thanks to less than 5,000 tweets — ostensibly signaling that Twitter’s algorithm considers this a bigger topic than Clinton’s filmed health scare. 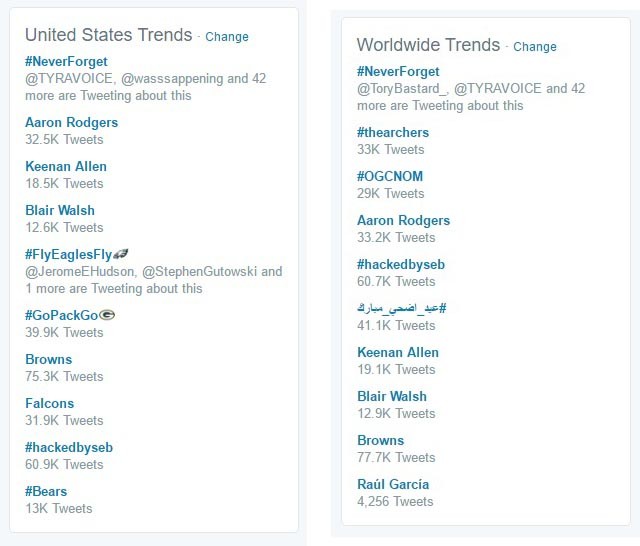 A bystander’s short video clip of Clinton falling over before her security detail dragged her into a vehicle has almost 26 thousand retweets at the time of this writing.

News events that spark multiple hashtags on Twitter are usually collected together in their Trending section. For example, Twitter could have just displayed “Hillary Clinton” as trending on the website, but this is not the case.

Twitter has a history of censoring subjects that it does not want trending on its site. In July, users accused Twitter of censoring WikiLeaks’ DNC email release after the related trending hashtag, #DNCLeaks, was suddenly pulled before returning to the trending list in a modified form.

Jack Hadfield is a student at the University of Warwick and a regular contributor to Breitbart Tech. You can follow him on Twitter @ToryBastard_ or email him at jack@yiannopoulos.net.