Americans do not have any right to stop Islamic immigration into the United States, the Democratic vice-presidential candidate said Tuesday night.

“Hillary and I will do immigration enforcement and we’ll vet refugees based on whether they’re dangerous or not,” Virginia Sen. Tim Kaine said at the Virginia vice-presidential debate.  “We won’t do it based on discriminating against you from the country you come from or the religion that you practice,” he said, in a reference to Donald Trump’s broad opposition to Islamic immigration.

“Discriminating” against Islamic believers “is completely antithetical to the Jeffersonian values,” Kaine claimed.

The claim matches a September tweet from the Clinton campaign, which suggested that foreign Muslims have a right to immigrate into the United States. 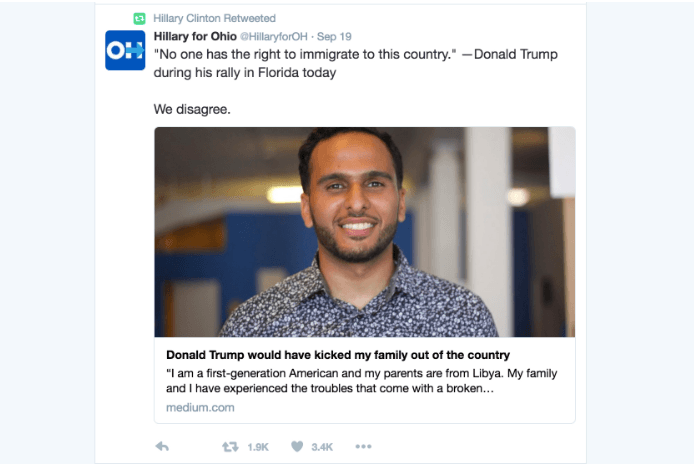 In contrast, GOP Gov. Mike Pence, said he and President Donald Trump do put the interests of Americans before those of foreigners. “The immigration issue “really does begin with us reforming our immigration system and putting the interests, particularly the safety and security of the American people, first,” Pence said.

“Donald Trump has called for extreme vetting for people coming into this country so that we don’t bring people into the United States who are hostile to our Bill of Rights freedoms, who are hostile to the American way life,” he added.

Polls show that Trump’s policy is backed by a strong majority of Americans.

First, the poll asked whether tourists and immigrants should be screened to check for their possible support of Islamic sharia. Seventy percent of respondents approved of the screening.

The poll then asked the 70 percent; “Do you believe that individuals who support the practice of [Islamic] Sharia law should be admitted into the United States?”  No, responded four-fifths of the 70 percent. That translates into 56 percent of total respondents backing Trump’s proposed policy of excluding sharia-supporting Muslims.

The overall opposition to the exclusion of sharia supporters added up to just 20 percent, with the rest undecided.

In the debate, Pence opposed Clinton’s plans to increase the inflow of Islamic refugees from Syria. “The director of the FBI, our homeland security, said we can’t know for certain who these people are coming from Syria.”

Under policies set by President Barack Obama, Islamic immigration is sharply increasing in the United States. In 2014, Obama also said Americans do not have any right to decide which foreigners can migrate into their homeland. “There have been periods where the folks who were already here suddenly say, ‘Well, I don’t want those [foreign] folks,’ even though the only people who have the right to say that are some Native Americans,” he said in November 2014.

On Monday, law enforcement officials announced they are pressing charges against an Islamic immigrant — Nelash Mohamed Das — who arrived from Bangladesh as a child in 1995. According to prosecutors,

“The FBI and homeland security said we can’t know for certain” which Islamic refugees are safe to import, Pence said. “You’ve got to err on the side of the safety and security of the American people, Senator.”

Pence repeatedly criticized Kaine and Clinton’s mass-immigration policy on crime and on economic grounds. “Hillary Clinton and Tim Kaine want to continue the policies of open borders, amnesty, catch and release, sanctuary cities, all the things that are driving — that are driving wages down in this country, Senator, and also too often with criminal aliens in the country, it’s bringing heartbreak,” he said.

“Ronald Reagan said a nation without borders is not a nation,” Pence added. “Donald Trump is committed to restoring the borders of this nation and securing our nation, enforcing our laws.”

Kaine tried to defend Clinton’s promise to end repatriation of illegal immigrants with “family” in the United States, and to award Green Cards to an unlimited number of foreigners who graduate from American colleges.

Hillary and I believe in comprehensive immigration reform. Donald Trump believes in deportation nation. You’ve got to pick your choice. Hillary and I want a bipartisan reform that will put keeping families together as the top goal, second, that will help focus enforcement efforts on those who are violent, third, that will do more border control, and, fourth, that will provide a path to citizenship for those who work hard, pay taxes, play by the rules, and take criminal background record checks.

That’s our proposal. Donald Trump proposes to deport 16 million people, 11 million who are here without documents. And both Donald Trump and Mike Pence want to get rid of birthright citizenship. So if you’re born here, but your parents don’t have documents, they want to eliminate that. That’s another 4.5 million people.

Donald Trump has a plan that he laid out in Arizona, that will deal systemically with illegal immigration, beginning with border security, internal enforcement. It’s probably why for the first time in the history of Immigration and Customs Enforcement their union actually endorsed Donald Trump as the next president of the United States, because they know they need help to enforce the laws of this country.

And Donald Trump has laid out a priority to remove criminal aliens, remove people that have overstayed their visas. And — and once we have accomplished all of that, which will — which will strengthen our economy, strengthen the rule of law in the country and make our communities safer once the criminal aliens are out, then we’ll deal with those that remain.

Pence also said that “after we secure the border, not only build a wall, but beneath the ground and in the air, we do internal enforcement.”

The [initial] focus has to be on criminal aliens. We just — we just had a conversation about law enforcement. We just had a conversation about the — the violence that’s besetting our cities. The reality is that there’s heartbreak and tragedy that has struck American families because people that came into this country illegally are now involved in criminal enterprise and activity. And we don’t have the resources or the will to deport them systemically.

Each year, 4 million Americans turn 18 years old and enter the workforce. But, each year, the federal government also imports 2 million immigrants, guest-workers, refugees and asylum seekers and illegal immigrants. The inflow of  workers drives down the salaries of American white-collar and blue-collar workers while boosting income for investors and employers. The inflow also sharply increases tax transfers from Americans to immigrants.