Matt Drudge of the Drudge Report has warned Hillary Clinton that he’s about to drop a bombshell about her “sex stuff” Saturday morning.

“Oh, on the sex stuff. Hillary is about to get hers…,” Drudge said in a tweet. 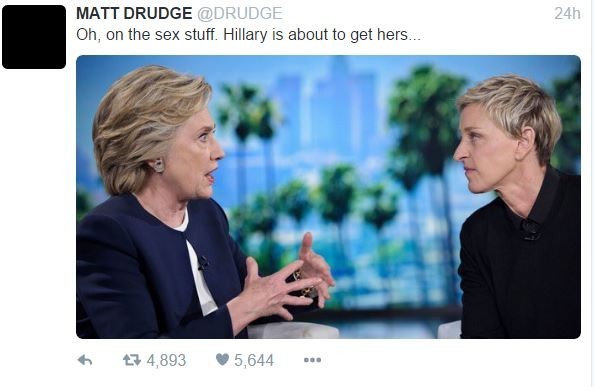 Drudge tweeted a picture of Clinton on the Ellen DeGeneres Show, where she appeared Friday in her first interview following the second presidential debate with Donald Trump.

The “sex stuff” Drudge is referring to concerns Clinton’s sexuality, which the London Times and several other foreign newspapers brought into question back in 2007 when Clinton was accused of having an affair with her aide Huma Abedin.

The Clinton campaign responded to these reports, saying that the reports were “ridiculous” and not to be taken seriously.

“This does not even qualify as tabloid trash… it’s ridiculous and reckless,” a Clinton aide said to The Week.

A rumor circulated in the 1990s saying that Clinton was secretly okay with her husband’s extramarital affairs because she was secretly a lesbian, but there has been no truth to the rumor.

This isn’t the first time Clinton has been accused of cheating on her husband.

Republican presidential nominee Donald Trump accused Clinton of cheating on her husband, but he didn’t say with whom or provided any specifics.

“Hillary Clinton’s only loyalty is to her financial contributors, I don’t even think she’s loyal to Bill if you want to know the truth,” he said during a rally in Pennsylvania on Oct. 1. “Really folks, why should she be?” he asked, a reference to Bill Clinton’s womanizing and accusations of sexual abuse.