Chicago investigators have found 119 deceased residents who apparently voted 229 times after their burial.

According to CBS 2 Chicago, many dead Chicagoans are never removed from voter rolls. After combining Chicago Board of Election voter histories and the Social Security Administration’s death master file, they found more than one hundred instances of dead Chicagoans who apparently voted years after their verified deaths.

One man who passed away in 1993 was found to have voted 11 times after his death. Another man who died in 1994 has voted six times since he passed into the next world.

“There are just a few instances here where a father came in for a son, or a neighbor was given the wrong ballot application and signed it,” said city election board spokesman Jim Allen, calling the dead voting “clerical errors.” 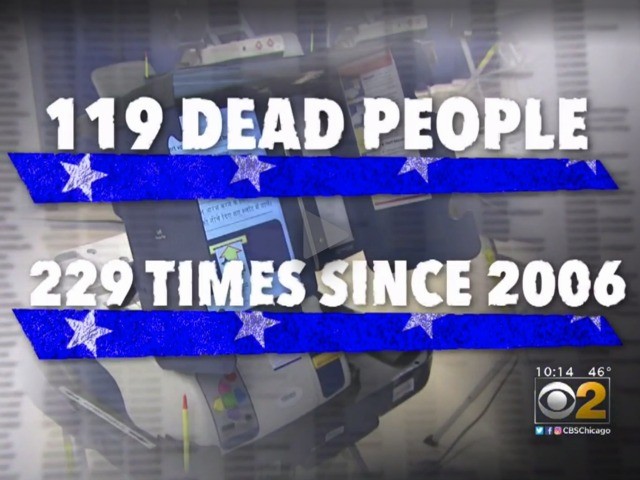 Another deceased man’s nephew was in disbelief when he found out his uncle, who passed away in 1998, voted in 2010: “That’s a fraud,” he told CBS 2 Chicago.

The Chicago report was broken by Pam Zekman, a Pulitzer Prize-winning journalist. It comes as two women in Florida and a man in Virginia face voter fraud charges, in one instance for allegedly registering voters who didn’t exist.

It also comes on the heels of an explosive undercover investigation conducted by James O’Keefe’s Project Veritas that caught Democratic operatives bragging about how they incited violence at Trump rallies by manipulating the mentally ill, and how they allegedly commit voter fraud.

“We manipulated the vote with money and action, not with laws,” Democratic operative Scott Foval says on one recorded tape. “It’s a pretty easy thing for Republicans to say, ‘Well, they’re bussing people in!’ Well, you know what? We’ve been bussing people in to deal with you fuckin’ assholes for fifty years, and we’re not going to stop now,” he added.