As climate alarmists rend their garments over fossil fuel emissions, a group of scientists has discovered that the world’s plants have somehow increased their capacity to assimilate carbon, resulting in an actual decline in the percentage of human-produced CO2 remaining in the atmosphere.

Researchers at Lawrence Berkeley National Laboratory have found to their surprise that despite the increased human emissions of greenhouse gases, between 2002 and 2014, plants were somehow able to absorb more carbon dioxide out of the atmosphere than in previous decades.

In a study published earlier this month in Nature Communications, the researchers note that “terrestrial ecosystems play a significant role in the global carbon cycle and offset a large fraction of anthropogenic CO2 emissions.”

So, although emissions have not abated, the amount of man-made carbon remaining in the atmosphere has declined.

“That portion that stays in the atmosphere — that’s called the airborne fraction,” said Trevor Keenan, one of the report’s authors, “has reduced by about 20% over the last 15 years.”

Not only that, over the past 50 years, “the amount of CO2 absorbed by the oceans and terrestrial biosphere annually has more than doubled,” the report states, and “global warming over vegetated land notably slowed since the start of the twenty-first century.”

Since the start of the twenty-first century, the researchers state, “the airborne fraction has been declining (−2.2% per year), despite the rapid increase in anthropogenic emissions.”

The decline is clearly visible in this accompanying chart, which shows the airborne fraction dropping after 2002 and breaking with the historical upward trend. The red line indicates rising levels between 1960 and 1990, while the blue line shows them dropping significantly following 2002. 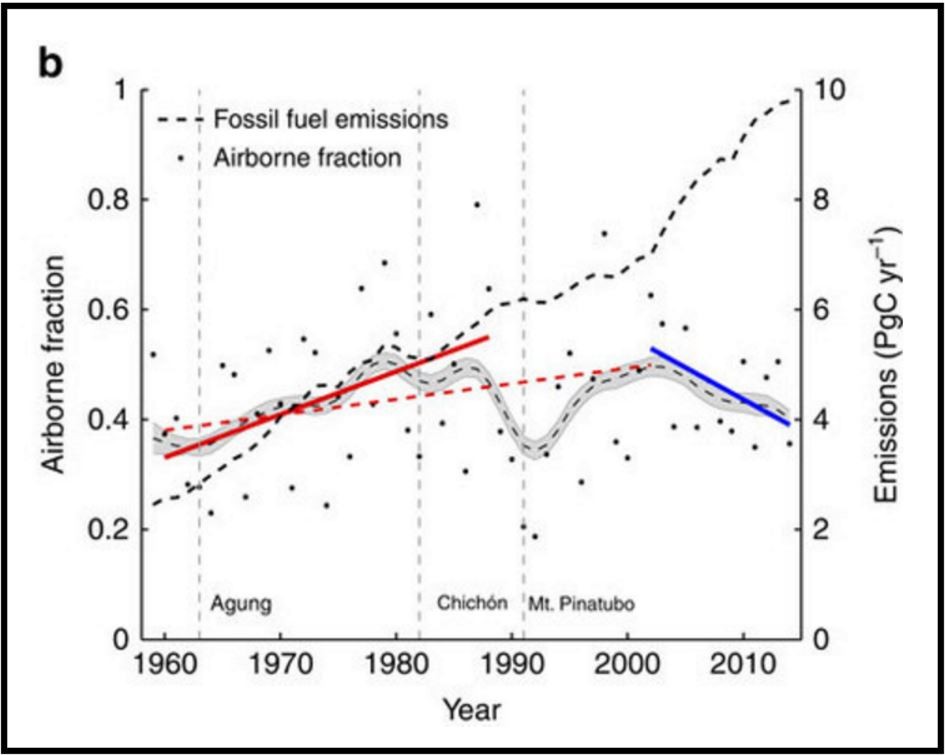 Changes in the airborne fraction and the CO2 growth rate. (Nature.com)

The Berkeley research team says it is not yet sure how it is happening, but plants appear to be photosynthesizing faster than they once did.

Scientists at Boston University have also reported a worldwide “fertilization” effect from increased carbon emissions, since CO2 is “plant food,” essential for the growth of green plants. Satellite surveillance has shown that a significant portion (between a quarter and half) of the world’s vegetated areas are becoming notably greener.

All of this has raised more questions than it has answered, underscoring the immense difficulty in accurately forecasting climate patterns.

Berkeley Lab’s Trevor Keenan said in a statement: “We don’t know exactly where the carbon sink is increasing the most, how long this increase will last, or what it means for the future of Earth’s climate.”

Importantly, the scientists recognize that “atmospheric growth rates have deviated significantly from predictions of a linear model of atmospheric CO2 concentrations and anthropogenic emissions since 2002,” underscoring the imprecision of computer models for predicting climate change.