On Monday, Stop Common Core in Michigan posted the following request for Betsy DeVos not to be considered for education secretary on its website:

We, the leadership team at Stop Common Core in Michigan, respectfully ask President-elect Donald Trump to immediately remove Betsy DeVos’s name from consideration as Secretary of the Department of Education. We do not make this request lightly but with considerable knowledge regarding her negative influence in Michigan as a proponent of Common Core.

The group leaders — Melanie Kurdys, Deborah DeBacker, Tamara Carlone, and Michelle Frederick — point not only to Trump’s “emphatic message against Common Core,” but also the reality that “most Republicans in our state say they are against Common Core but do nothing to stop it.”

“DeVos is part of ‘the swamp’ in Michigan,” the leaders state in a post written by Karen Braun. “She represents both a special interest AND as an influential Republican fought EVERY effort to stop Common Core in Michigan with her money and political influence.”

DeVos — whose family is an heir to the Amway fortune — is a former chair of the Michigan Republican Party and a party mega-donor. A champion of charter schools and “school choice” — a concept that even many pro-Common Core individuals and groups support — DeVos released the following statement on a new website when the Trump transition team announced her nomination to the top education post:

Certainly. I am not a supporter—period.

I do support high standards, strong accountability, and local control. When Governors such as John Engler, Mike Huckabee, and Mike Pence were driving the conversation on voluntary high standards driven by local voices, it all made sense.

Have organizations that I have been a part of supported Common Core? Of course. But that’s not my position. Sometimes it’s not just students who need to do their homework.

However, along the way, it got turned into a federalized boondoggle.

The Michigan Common Core opponents, however, say DeVos’s “recent claim that she is against Common Core is not an accurate representation of her actions regarding Common Core or the competency-based centralized education system the standards help build from prenatal to career.”

“We have done our ‘homework,’” the Michigan Common Core opponents respond to DeVos, and they support their claim with more than several observations:

Betsy DeVos funds and serves on the board of the Great Lakes Education Project (GLEP).

DeVos founded GLEP in 2001 and served as chair until 2008; she currently serves as a board member. GLEP is a special-interest education political action committee. One of the stated priorities of GLEP is “implementing” and “maintaining” Common Core “high standards” reform. The GLEP document “The Conservative Case for Common Core” clearly articulates their support of Common Core. No retraction has been issued. Only after President-elect Trump nominated DeVos for Secretary did she attempt to distance herself from the pro-Common Core position of organizations such as GLEP.

Betsy DeVos and GLEP are lobbyists for Common Core.

DeVos and GLEP lobbied the Michigan legislature to implement and maintain Common Core and related reforms. Former MI State Representative, now State School Board member-elect Tom McMillin, recently spoke to our team about DeVos and her claim that she is against Common Core.  McMillin, a strong opponent of Common Core, recalled that in 2013 DeVos specifically told him she was for Common Core during the very contentious legislative debate to stop implementation. With the help of DeVos and GLEP, resolution (HR-11) was abruptly passed through the Senate on a voice vote. The hasty vote allowed Common Core to continue. GLEP publicly applauded the resolution and the continued implementation of Common Core.

The Michigan leaders assert that DeVos and GLEP are still seeking to influence elections in their state to help continue the “implementation of a Common Core-aligned centralized education system.”

“Candidates who receive a GLEP endorsement face intense pressure to continue the reforms she desires,” they explain. “Those reforms include the continued implementation of Common Core or so-called ‘high standards,’ accountability, and school choice.”

DeVos, who backed Sen. Marco Rubio during the primary, and then served as an at-large delegate for Ohio Gov. John Kasich at the Republican National Convention, was opposed to Trump’s nomination for president, referring to him as an “interloper” who would never achieve the nomination because he didn’t “represent the Republican Party.”

In the photo below, taken by Tamara Carlone, DeVos is seated at the RNC in July while all others stand to applaud Trump during his acceptance speech: 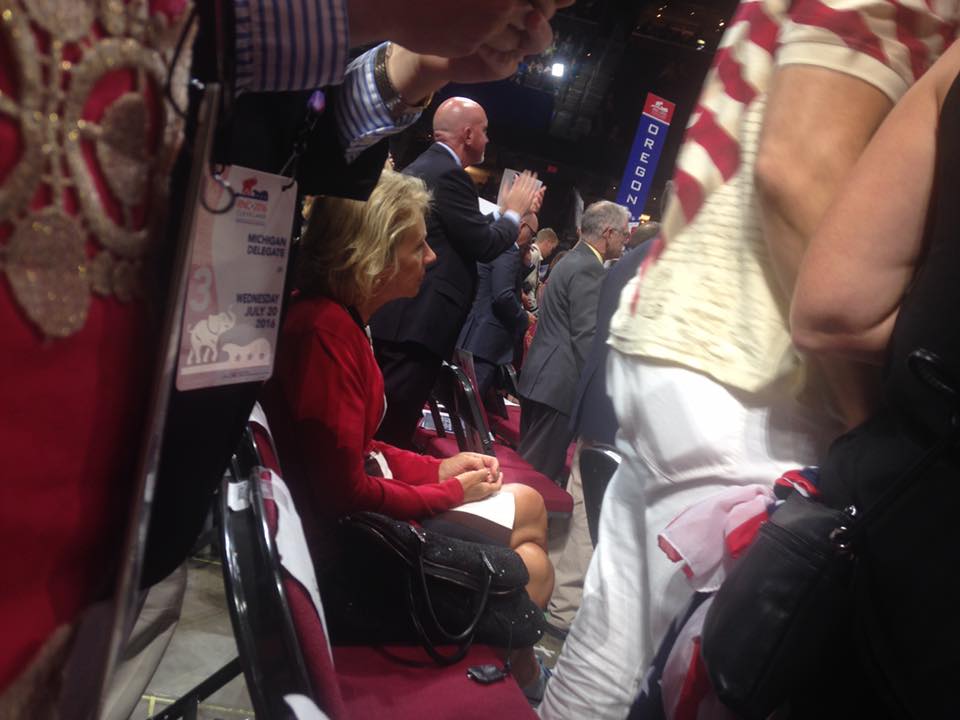 DeVos said she would not support Trump until he began talking about school choice, which he eventually did. The Michigan leaders write that DeVos shares a view of Common Core that is shared by the U.S. Chamber of Commerce:

The DeVos definition of school choice is the freedom to choose which Common Core aligned charter school will test and track your child from cradle-to-career. Local and parent control do not exist in DeVos’s education reform model. Data and government funding drive the decision. In a nutshell, school choice is centralized control to meet the demands of the state and regional business not the dreams of the child. If confirmed, DeVos will hire people who share the same vision of common core aligned centralized education system to help her run the Department of Education. The exact opposite of his goal to “drain the swamp.”

The Michigan anti-Common Core activists also point to emails they received from GLEP director Gary Naeyaert, who reportedly threatened their group with legal action for tracking whether political candidates in Michigan were supported by GLEP.

“Let me be as clear as possible,” the group leaders say Naeyaert wrote to them in an email. “If you continue to make false statements about [our] organization, you will be hearing from our legal counsel.”

The grassroots leaders say that while DeVos released a statement asserting she was “certainly” not in support of the controversial standards, neither she nor GLEP has reached out to their organization to offer assistance in efforts to repeal Common Core in their state.

“[O]ne would think that after fighting us for so long and threatening legal action that either DeVos or Naeyaert would have made some attempt to reach out and let us know they changed their position,” they say. “They have not.”

“In fact, GLEP partnered with pro-Common Core Governor Snyder and others in the Michigan Coalition for Higher Standards to OPPOSE the bills,” they add. “The bill quickly passed the Senate Education Committee but has not been voted on by the full Senate. We believe that GLEP and the coalition’s opposition to SB 826 is a significant reason it has not passed.”

In requesting Trump rescind his nomination of DeVos as education secretary, the group leaders say, “Betsy DeVos’s recent statement against Common Core is insufficient to counter the weight of evidence over many years during which she worked to see Common Core and related reforms implemented in Michigan.”

“We have no confidence that she will stop Common Core at the national level and every reason to believe she will continue to ‘fill the swamp,’” they conclude.

Trump transition team spokesman Jason Miller said in a statement, “The President-elect has been consistent and very clear in his opposition to Common Core. Anybody joining the Administration is signing on to the President-elect’s platform and vision for moving America forward.”