Results of the 2015 Trends in International Math and Science Study (TIMSS) and the Program in International Student Assessment (PISA) find American students are showing at best mediocre performance in math, science, and reading.

These international test results come following the 2015 results of the assessments known as the Nation’s Report Card (NAEP), which found that only a third of the nation’s eighth graders are at or above the proficiency level in math and 34 percent are at or above the same level in reading.

“The mediocre results from the 2015 NAEP assessment and the just-released scores from the international TIMSS and PISA tests demonstrate the ongoing failure of D.C.-driven education reform efforts,” Jamie Gass, Pioneer Institute’s director of the Center for School Reform, tells Breitbart News. “It’s now clear that eight years of the Obama administration’s federal education policies, and over six years of Common Core, have yielded little or nothing for America’s schoolchildren in terms of academic improvement on both national and international testing.”

TIMSS results show the U.S. having a small, statistically insignificant, drop in grade 4 in math (541 to 539), and increase in 4th grade science (544 to 546), while in grade 8 results show some improvement in both math and science (509 to 518 and 525 to 530, respectively). Nevertheless, the overall place of the U.S. did not change and we are still somewhere in the middle of the pack, with the leading countries some 50 to 100 points above us. This effectively means that only roughly 10 percent of our best students achieve at the average level of those high-achieving countries.

The table below shows where U.S. 8th grade students stand in math on the 2015 TIMSS:

PDF 1 by Breitbart News on Scribd

“Only a single U.S. state – Florida – participated ‘as a country’ in TIMSS, reversing the steady increase in such state participation that reached eight U.S. states in 2011,” Wurman notes as well. “One has to wonder if states were not discouraged from participation, to eliminate yet another point of reference to see how the spread of Common Core affected different states.”

Results of PISA, which is administered to 15-year-olds, is best characterized as “bad news,” writes Cato’s education director Neal McCluskey. “Scores on the exam…were all down. Science, math, and reading…all dropped. And our placement among other participating countries? Well below average for advanced countries in math, slightly above in science and reading.” 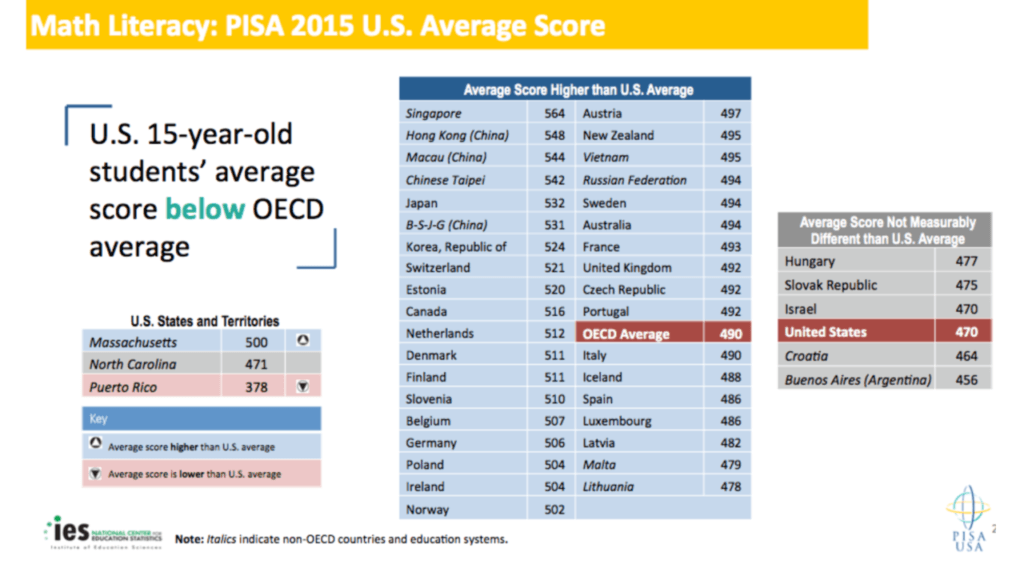 “Taking PISA and TIMSS together, the news isn’t great, especially considering that we spend more on K-12 education than almost any other country in the world,” McCluskey concludes, noting that groups such as the Collaborative for Student Success “recently argued that adopting ‘high standards’—read: the Common Core—is clearly working because state test scores have gone up in many Core states.”

“But it is quite possible that scores in Core states have risen largely because those states have adjusted to the Core, not because students are better educated,” he adds. “The target may have moved to the left, or even down, but scores will lag until sights are adjusted. Tests like PISA can serve as something of a check against using one exam to proclaim policy success.”