A new study by the independent research group PRRI reveals a huge divide between Republicans and Democrats over how to wish people well during the Christmas holiday season.

In its research, the Washington DC-based organization found that Democrats overwhelmingly favor the more politically correct, generic greetings of “Happy Holidays” or “Seasons Greetings” over the religiously charged “Merry Christmas” that recognizes the reason for the festivities.

Asked whether it is more appropriate for stores and businesses to greet customers with “Happy Holidays” or “Seasons Greetings” instead of “Merry Christmas,” nearly two-thirds of self-identified Democrats (66 percent) responded affirmatively.

When asked the same question, the response of Republicans was the exact inverse of Democrats’, with two-thirds of respondents (67 percent) favoring the use of the traditional greeting of “Merry Christmas.”

This means that Democrats are more than twice as likely as Republicans to favor generic season’s greetings over well-wishes that specify the nature of the holiday. 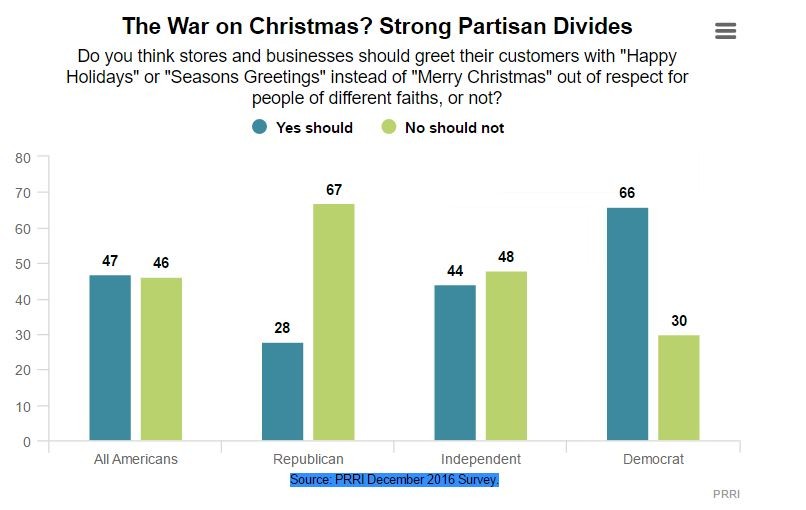 Unsurprisingly, the political divide of Christmas mirrors a religious divide as well. According to the study, some two-thirds (65%) of white evangelical Protestants and close to six in ten (58%) Catholics say stores should say “Merry Christmas” to greet customers.

Mainline Protestants, on the other hand, are more closely divided over which greeting is more appropriate, with 46 percent favoring “Happy Holidays” and 48 percent preferring “Merry Christmas.”

A strong majority of non-religious (unaffiliated) Americans (58 percent) believe that “Happy Holidays” is a more appropriate greeting than “Merry Christmas.”

There is a comparable age rift as well, with millennials preferring the more politically correct greetings and older people favoring an explicit recognition of the feast.

While two-thirds (67 percent) of young adults aged 18-29 say it is better for businesses to greet customers with “Happy Holidays” as opposed to “Merry Christmas,” only 38 percent of seniors aged 65 and older agree. Most seniors (54 percent) believe that “Merry Christmas” is a more appropriate greeting during the holiday season.

The PRRI study revealed that Americans overwhelmingly celebrate Christmas as opposed to other holidays at this time of year, with almost nine in ten (89%) Americans saying they will be celebrating Christmas this December.