Homicides rose across most major cities in the U.S. throughout 2016, worsening the crime wave that began in 2014, according to new data.

Homicides jumped in 16 of 20 major U.S. cities, while 37 out of 65 of the country’s biggest police departments saw “year-over-year homicide increases” as of the end of September, according to The Wall Street Journal:

Nationally, 37 of the 65 largest police agencies, including ones in San Antonio, Las Vegas and Memphis, Tenn., reported year-over-year homicide increases as of Sept. 30, the Major Cities Chiefs Association said. In 2015, 44 departments reported increases, many for the first time in years.

“I have a lot of concern about that many cities experiencing those increases in violence,” said Darrel Stephens, executive director of the association, which represents chiefs from the largest departments. He said it is too early to know whether the increases constitute a trend.

Mr. Stephens said he thinks crime is largely driven by local dynamics such as drug-related violence. But he said police chiefs nationwide bemoan the easy availability of firearms. In Chicago, police have seized more than 8,000 illegal guns this year. He also said solutions to stem the tide of violence will require more than policing strategies.

Chicago’s gun crime death toll is so high it’s distorting national murder figures; the number of murders in Chicago hit 755 on December 21 for the year so far, Chicago Tribune reports.

An opioid epidemic is ravaging communities across the country as well, which may contribute to increases in crime. 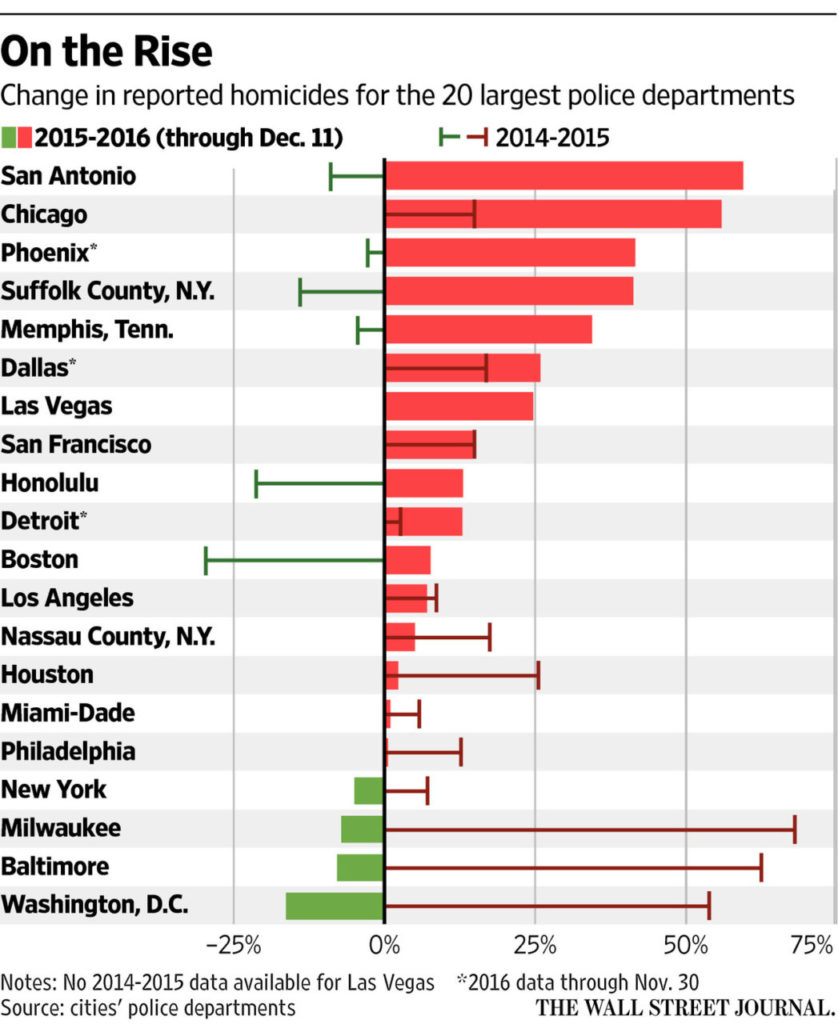 The Major Cities Chiefs Association also said, “rapes, robberies, aggravated assaults and non-fatal shootings” had increased as of the end of September as well.

The FBI hinted that the nationwide crime rate rose as Obama’s “stigmatize-and-federalize” campaign against local and state law enforcement began.

Americans are deeply concerned about the increases in crime: 53 percent told Gallup in April they “worry a great deal” about crime. Plus, 44 percent were also concerned about drug use. Almost one-third of U.S. households (29 percent) say they or a family member has been victimized by violent crime within the last year, another Gallup survey found.