A new study shows the college-graduate inhabitants of New York’s elite zip-codes are the most socially isolated Americans in the United States, and have the least familiarity with how ordinary Americans live.

Close behind are the parochial professionals in zip codes around Boston, Silicon Valley and Los Angeles, whose social bubbles leave them isolated from the hopes and fears of their fellow Americans, according to the study by Charles Murray, one of the nation’s leading policy experts, who now works at the D.C.-based American Enterprise Institute.

“America really does have a new elite that is isolated from and often ignorant about white mainstream America,” said Murray, who recently said a pause in low-skill migration might aid the most economically damaged districts in the United States.

The results are based on a survey of the 130,000 people who voluntarily completed Murray’s online test — see here — and it shows that familiarity with mainstream American lives slides down as the number of college graduates rises up in each zip code’s particular social bubble.

But the elite respondents’ understanding of ordinary Americans’ lives actually crashes in the top few districts with the highest percentage of college degrees and greatest “Socio-Economic Status” or ‘SES.’

The important point about the graph is that the top few percentiles are crucial for understanding our cultural divide. The people living in zip codes in the top two percentiles include almost all of those who run the nation’s culture, economy, and politics. And that’s where the bubble scores plunge…

The New York City area dominates, accounting for 34 zip codes in the top [most isolated] 100 [zip codes]. Manhattan alone has 18 zip codes in the top 100, including all the zip codes in the Upper East Side and Upper West Side. The zip codes surrounding San Francisco Bay constituted the next largest contribution, amounting to 29 zip codes. I have divided them somewhat arbitrarily between those associated with San Francisco and those of Silicon Valley. The Boston area had 15 zip codes and Los Angeles 8. That adds up to 86 out of 100. The entire rest of the country had just 14.

Here is a chart showing how knowledge drops in the most elite zip codes. 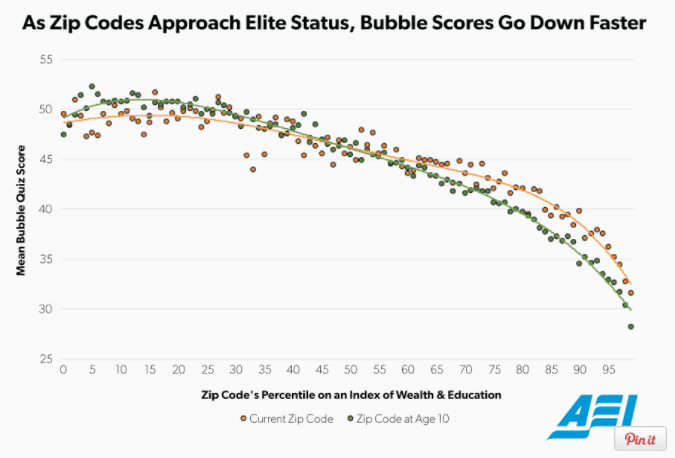 The most ignorant district is Fremont, California, near Silicon Valley. However, that zip code is somewhat of an anomaly because it includes many immigrants who did not grow up in the United States. New York’s Upper East Side, alongside Central Park, has the second-worst ranking. See the results here.

Murray’s test asks people a series of questions designed to reveal their familiarity – or ignorance — of mainstream civic reality in normal America.

Did you grow up in a family in which the chief breadwinner was not in a managerial position or a high-prestige profession (defined as attorney, physician, dentist, architect, engineer, scientist or college professor)?

Have you ever lived for at least a year in an American community with a population under 50,000 that is not part of a metropolitan area and is not where you went to college?

Have you ever walked on a factory floor?

Have you ever held a job that caused something to hurt at the end of the day?

Have you ever had a close friend who was an evangelical Christian?

Murray will soon release another study of the data showing the wealthy SES zip-codes with the least ignorance about their fellow Americans. That data, he said, “for the elite among you, [will show] places where you could raise your kids with a somewhat lower probability that they grow up to be isolated elitist snobs.”