The company provided employers at its Philadelphia headquarters time off on Thursday to protest Trump’s popular policy, which is designed to reduce the inflow of costly refugees and to exclude migrants carrying “hostile attitudes.” Company protests were also expected in Washington D.C., New York and California.

do not support the Constitution, or those who would place violent ideologies over American law … those who engage in acts of bigotry or hatred (including “honor” killings, other forms of violence against women, or the persecution of those who practice religions different from their own) or those who would oppress Americans of any race, gender, or sexual orientation.

Trump underlined the pro-American nature of his reform today, saying at the National Prayer Breakfast that;

We will not allow… intolerance to spread in our nation… So in the coming days we will develop a system to make sure those admitted into our country fully embrace our values of religious and personal liberty and that they reject any form of oppression and discrimination. We want people to come into our nation but we want people to love us and love our values. Not hate us and hate our values.

In Philadelphia, the 45-minute protest against the “hostile attitudes” policy was held just after lunch.

Employees of Comcast in Philadelphia are walking out in protest against trumps immigration order. pic.twitter.com/hk69WdH088

The growing campaign by corporations — including Google, Starbucks, Amazon, Lyft and Netflix — against the newly elected president and his immigration reform is shaped by their bottom-line desire to raise the inflow of immigrant consumers and cheap workers, who include many immigrants from Asia and Latin America, plus Indian guest-workers working information-technology jobs.

But the corporate backlash is also boosted by sympathy from many top-level managers — both native-born and immigrant — towards striving migrants, regardless of the migrants’ political or ideological views.

Comcast’s Kotay, for example, arrived in the United States as a child and worked his way to the top of the nation’s high-tech sector, alongside other Indian immigrants who now running Google and Microsoft. In his Twitter account, he describes himself as “comcast. chief technology officer. immigrant.”

Kotay made his political sympathies clear in a message to his employees, in which he appears to describe the elected President as “the enemy,” and also suggests that Trump is similar to now-dead Venezuelan dictator Hugo Chavez. 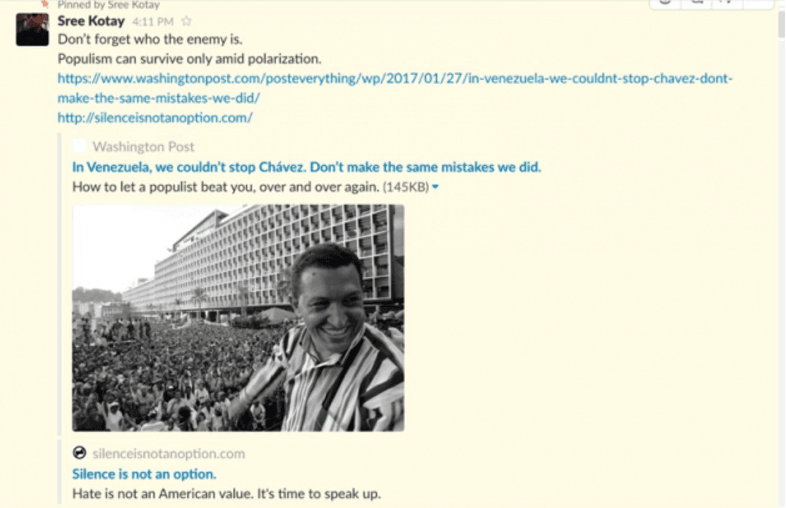 The screenshot was leaked to a radio station, New Jersey 101.5.

Kotay’s Twitter feed also shows his personal dislike of Trump’s policies, which may end up reducing the inflow of Indian-born migrants and contract-workers into the United States.

Trump’s policy is designed to exclude “hostile immigrants,” including those who reject the U.S. constitution or who support violence via Islamic holy war or “jihad.” The new policy would also exclude people who endorse “honor killings” of women and girls, which is a widespread problem in India and a growing problem in the United States.

Like many other progressive advocates, Kotay praises immigrants while downplaying the accomplishment of ordinary Americans, who either birthed most of Comcast’s workforce and customers, and also remain the vast majority of Comcast’s employees and customers.

Those who would surrender liberty in the name of security deserve neither. pic.twitter.com/eF3bR6Mdw7

At a Jan. 26 speech to an awards event, Kotay declared, according to his notes, that

It is hard, of course, to be up here and not be mindful of the current environment around us… the rise of Nationalism, and what that says about patriotism…. discussions abound on race and gender, orientation and religion… and of course, on that illusive notion of ‘Privilege’ and how that shapes us (or doesn’t)…

People are often surprised when I tell them about where I grew up — in the middle of nowhere Virginia…  And yes, as an Indian immigrant, I encountered my share of racism — mostly the casual racism of ignorance and exclusion, less so the angry racism of hate and fear… and that was its own privilege. Adversity builds character — and, you know, I pushed back too… my own brand of casual reactionary-ism. But all things said, it was a wonderfully surprisingly supportive place to grow up…

[a] hero of mine, Neil Degrasse Tyson (who I think of as my personal chocolate Jesus :P), recently tweeted: “I dream of a world where the truth is what shapes people’s politics, rather than politics shaping what people think is true.”

I am also certainly privileged to be an Indian man in the technology industry in the good ol’ US of A….

During the Philadelphia protest, Kotay stood at the front of the crowd of native-born and immigrant workers, wearing glasses pushed back to the top of his head. He also wore a coat with a yellow armband. The crowd may have included some of the company’s Indian-born temporary contract-workers.

“We understand that some of our employees are concerned and we respect their desire to express their opinions,” Comcast flack John Demming said in a statement to the radio station.

“Our primary focus is to make sure that all of our employees feel safe in their jobs, including while traveling. We have assured our employees that no one will be asked to travel to a place that would result in them feeling vulnerable in any way.”

Although progressives argue that Trump’s policies promote violence, much actual violence is being directed against Trump’s supporters.

Many companies reduce their labor costs and boost their profits by relying on immigrants and foreign contract-worker labor.

Since 2013, Comcast has tried to hire hundreds of cheaper foreign white-collar professionals workers to take the jobs sought by young, debt-burdened American graduates. Many of those foreign workers come from India, according to the MyVisaJobs.com website, which displays government provided data. Without the extra inflow, companies would be forced to raise salaries to attract Americans into those professions, so nudging up salaries for all American white-collar workers.

Each year, the federal government provides up to 150,000 Green Cards to foreign workers sponsored by U.S. companies, such as Comcast. Of course, each new Green Card worker nudges down the average salary that Americans companies have to pay their domestic employees. 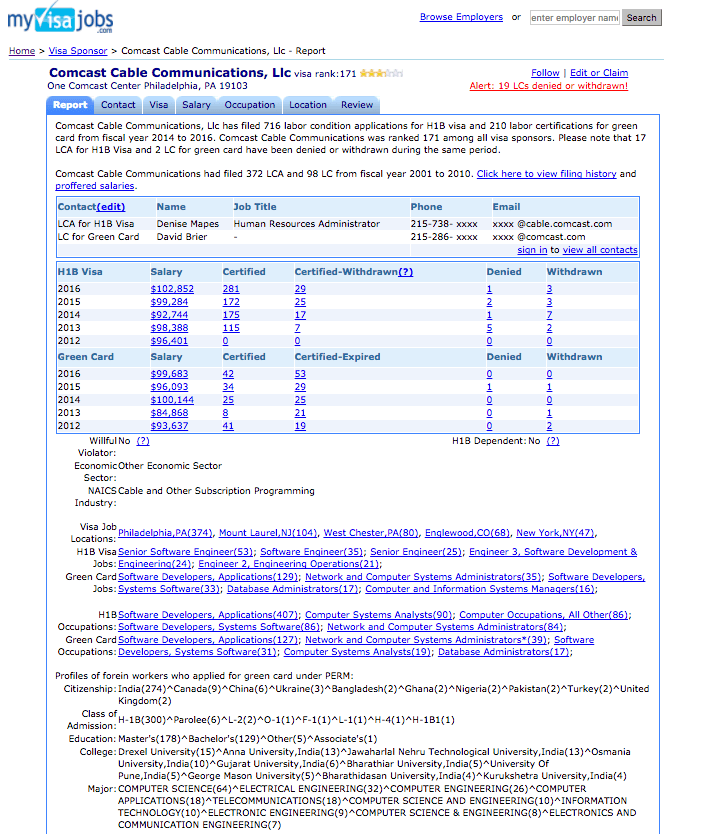 Legal immigration also delivers roughly 1 million new prospective customers each year to companies. Legal and illegal immigrants now comprise one out of seven people living in the United States. But many of the migrants are unskilled, and so many rely on taxpayer-provided welfare payments to fund their living expenses, including Comcast services.

In 2015, Google’s chairman Eric Schmidt bemoaned the slow population growth in the United States, Japan and other countries, asking “how are you over a couple of decades to deal with the fact that one third of your customers are going to go away?”

“Well, one [way] is produce more customers through immigration,” he said at the March 18 event hosted by the American Enterprise Institute.

However, Comcast, like many other companies, has to deal with government on many critical issues. One huge issue for Comcast is the planned merger of AT&T with Time-Warner, which would give AT&T a huge store of media products to help it compete against other companies, such as Comcast. Trump has voiced opposition to the merger, but his deputies have yet to announce a decision.