The University of California at Berkeley is back in the news, along with its familiar appellation, “The Home of Free Speech.”

As a proud alumna of that superlative public institution of higher learning, allow me to express my humble opinion on the matter:

Now, Berkeley may have been the campus on which Mario Savio started the so-called Free Speech Movement. But that does not necessarily correlate with the attainment of free speech — not then, and assuredly not now.

After skipping through elementary school (grade-wise), I found myself on the august Berkeley campus in 1969. Mario was gone by that year, but there remained plenty of speech for the rest of us to fight for.

I wasn’t particularly political in those days but wore flowers in my hair — putting me inescapably at odds with California Gov. Ronald Reagan by the time graduation was in sight. Memories of those last several months are indelibly singed on my consciousness.

You’ve heard the tale. A parcel of land on Telegraph Ave., the main thoroughfare to the campus, was purchased by the university in 1966. The school and the city government dithered about what to do with the land for years, until it became a derelict eyesore. So the community moved in with pickaxes and hoes and began to develop it into a public space: People’s Park.

Then Gov. Reagan put his foot down. He would have none of that nonsense from a bunch of communist sympathizers, protesters, and sex deviants. He sent in the National Guard.

School was shut down. Classes were canceled.

But I was a theater major. I was in a play, and the show must go on. So I ventured onto the deserted campus to rehearse. The drama department was housed in a rustic wood cottage nestled in tall trees beside a flowing brook. As I made my way there, I heard a rustling above me. And there, perched on a high branch, was a guardsman. He was pointing a gun down — at me.

That was the moment I decided to forego graduation and accept my parents’ offer of a plane ticket to London, where my boyfriend at the time (a grad student in the Berkeley theater department) awaited. I intended never to return to this fascist place and kept my word on that for over a year.

But the excitement wasn’t quite over. I made a pilgrimage to the park to place a flower in the fence that had been erected around it. Within the fence stood a line of guardsmen, guns and bayonets poised. I made eye contact with one of the soldiers as I wound the stem of my flower around a rung of the fence. I think I smiled at him. 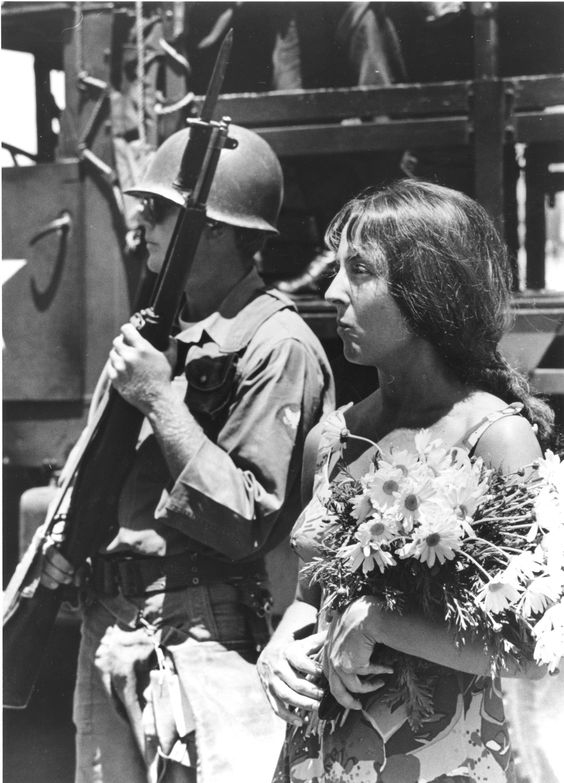 But the construction of that fence provoked what was long accounted to be the most violent confrontation in the university’s history. Was free speech attained for all that? Was it supported by the university or the government to any greater degree for the students’ and activists’ struggles?

Fast forward to Wednesday night. Breitbart’s MILO pays the home of free speech a visit … or attempts to. All he wants to do is talk — to share his opinions with whomever cares to listen. But, oh, no. Hold on just a darned minute. Free speech is just a little too dangerous to U. C. Berkeley. So let’s make it prohibitively expensive for those menacing College Republicans to host him. And if he shows up anyway, call out the violent anarchist “protesters” … and make sure that this time police presence is at a minimum.

So much for free speech. As it was once, so shall it ever be.

But it sure was a fun place to go to college.