Four out of ten white working-class men have given up looking for work, says a study by the Economist magazine, which normally champions unrestricted trade and migration.

That has a huge impact on American society because these non-college, working-age white men comprise 23 percent of male workers in the United States, and they are hit hard by unrestricted trade, cheap-labor immigration, and government-aided spread of opioid painkillers.

The 2007 recession hurt white, working class worse than other groups of men, according to the Economist: “Between 1994 and 2001 the average gap in unemployment rates between all men and WWCM was only 15 percent. Since the start of the Great Recession that average gap has swelled to 24 percent.” 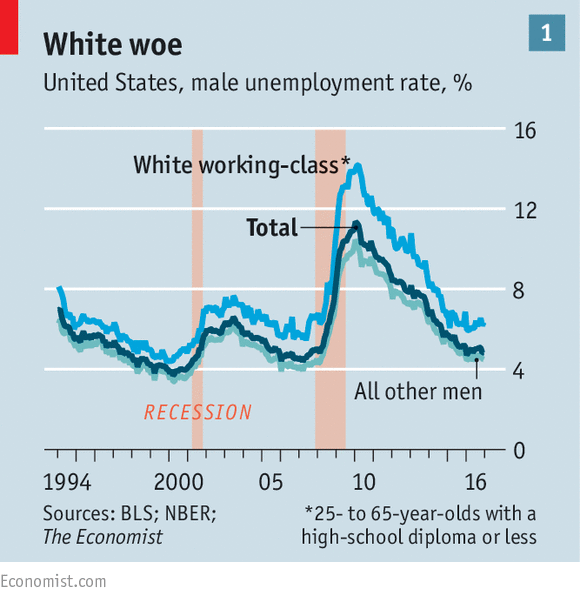 White, working-class males’ workforce participation has sunk to 59 percent—meaning 41 percent are longer seeking work. “For WWCM it has declined to 59 percent (a proportionate gap of 15 percent, compared with an average of 10 percent between 1994 and 2001 [among other groups]),” the Economist clinically says.

Wages fell for non-college Americans dropped too, partly because of massive immigration. Extreme immigration policies enable a $500 billion wealth transfer from workers to major employers, according to a study by a Harvard professor.

The Economist compressed the alarming data about non-college white workers into a chart which shows their rising unemployment, dropping labor-force participation and shrinking wages, compared to all other categories of men.

The combined gap, says the Economist, is the “Forgotten-Men Index,” which now stands at 100. 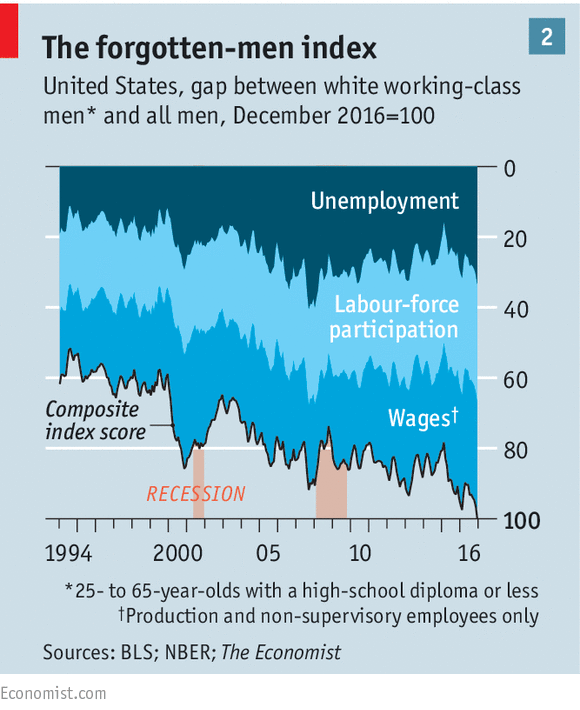 Unsurprisingly, the Economist glides past the underlying causes.

The immigrant population is set to grow more than 700 percent from 1970s levels, and it currently stands at a staggering 42.4 million. Unless immigration controls are taken off autopilot, over 78 million foreigners imported by Democrats and the GOP establishment will reside in the U.S., pushing non-college Americans out of the job market.

Mass immigration from the Third World is crippling workers in the economy, as Breitbart News reported in July. Every single job created from 2000 to 2014 went to the foreign-born population residing in the U.S.

Suicide by intoxicants and narcotics is a symptom of the white, working class’s malaise. As Breitbart News previously reported, Medicaid’s opioid prescriptions have gently laid many Medicaid recipients in their deathbeds. About 57 percent of non-working, white men between the ages of 21 to 55 collect disability benefits, allowing them to get cheap narcotics from Medicaid. One-fifth, or 21 percent of all U.S. men aged 25 and 55, are Medicaid beneficiaries.

Pharmaceutical companies eagerly respond to ailing customers’ wants. Painkiller manufacturers delivered 780 million hydrocodone and oxycodone pills to West Virginia in a short six years. That’s 433 highly-addictive pills for every man, woman, and child in the Mountain State. Coincidentally, 1,728 people fatally overdosed on hydrocodone and oxycodone pills within those six years, according to the Associated Press.

Similarly, heroin overdose deaths have more than tripled between 2010 and 2015. Over 47,000 people died from drug-overdose deaths in 2014 alone, including 28,647 from opioids and heroin overdoses. Nearly all of the heroin used in the U.S. is brought across the border by illegal-alien, Mexican traffickers.