Private Manning earned his 35-year sentence by spilling a huge storehouse of 700,000 Army and military documents in 2010 to the public Wikileaks website. The jury convicted Manning on 21 counts, including six counts of violating the Espionage Act. 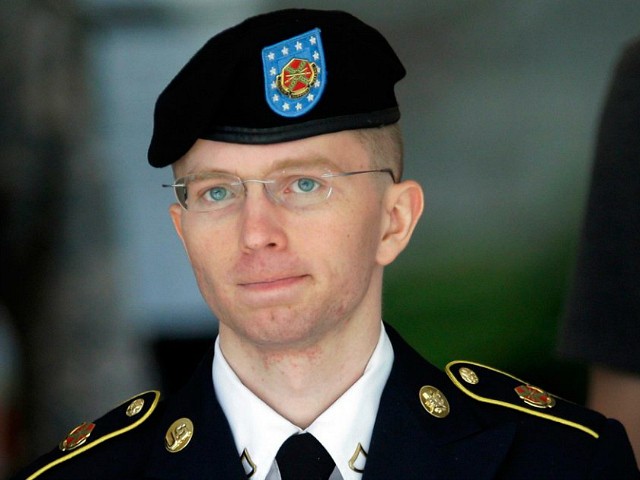 But Manning quickly became a hero of American progressives and left-wingers by declaring that he is, in fact, a “transgender” woman named Chelsea, and so his sentence was shortened to just seven years by Obama, who was then serving as the Commander-in-Chief prior to his January 20 departure.

Chelsea Manning [@xychelsea] toasts her liberation from U.S. military detention with Champagne "Here's to freedom and a new beginning." pic.twitter.com/PNHkxjOEzl

A picture's worth a thousand words. Here's a little more than that about Chelsea Manning's new portrait:https://t.co/XYvWgJs7Hj

A picture's worth a thousand words. Here's a little more than that about Chelsea Manning's new portrait:https://t.co/XYvWgJs7Hj

Here is the first statement from Chelsea Manning after her release from prison. pic.twitter.com/970qEHBlf8

Despite his conviction, Manning is still in the military, so he remains on active duty and will receive taxpayer-funded medical care until his various legal appeals are wrapped up.

Manning’s self-transformation from humdrum maleness into his partially female appearance was praised by progressives who are now using the “transgender”  claim to attack another basic civic rule in American society — that men and women, boys and girls, are equal but also different and complementary.

Progressives are attacking that social practice by declaring that there’s no connection between a person’s biological sex and their sense of femininity or masculinity, which they describe as “gender.” Once the ideas of “gender” exists, progressives begin arguing that “gender” is as important as biology’s sexual differences, and also that people have the right to choose whatever “gender” they prefer.

Next, progressives began arguing that because only a tiny minority of Americans call themselves “transgender,” the government should rewrite the nation’s civic rules to ensure this “transgender” minority of less than 1 percent is not oppressed by the vast majority of normal heterosexual men and women, boys and girls.

To minimize oppression, say leftwingers, the government should use anti-discrimination laws to force ordinary Americans — plus their myriad civic groups, charities, and companies — to say that “transgender” people are members of the opposite sex, and therefore Bradley Manning is a real female she, no matter how much his bones, organs, and genes show that he is a male he.

There is no such thing as “gender” or “transgender.” There are only males and females who are either close or far from the social ideal of masculine or feminine appearance and attitudes. Tomboys are still girls, lesbians remain female, emotionally fraught boys are still boys, and gay men are men.