It wasn’t Russia. It wasn’t even meme magic. It was in fact the “deplorables” who once supported Hillary Clinton that propelled President Trump into the White House.

This is one of the major takeaways of a new study into the Five Types of Trump Voter — an 8,000-person large survey conducted by the Voter Study Group.

Noting the five distinct groups — American Preservationists, Staunch Conservatives, Anti-Elites, Free Marketeers, and the Disengaged — the study found it was the preservationists, a group relatively friendly to Hillary Clinton in 2012, that tipped the balance.

Indeed while Donald Trump had the support of the free marketeers and the staunch conservatives, it was his appeal to the anti-establishment, disengaged, and preservationists that put him over the line.

Hillary Clinton’s infamous “basket of deplorables” moment, where she attacked half of candidate Trump’s support base, was actually an attack on many people who would may have been considering voting for her.

The study notes these voters “lean economically progressive, believe the economic and political systems are rigged, have nativist immigration views, and a nativist and ethnocultural conception of American identity”. It also states “nearly half had positive views of Clinton in 2012”.

American Preservationists are trade skeptics and look more like Democrats on domestic economic issues, particularly on the nation’s wealth distribution, concern over old-age entitlement programs, and animus toward Wall Street. They feel powerless against moneyed interested and the politically connected and tend to distrust other people. They also share liberals’ views on the environment, believing that global warming is a serious threat and human activity is primarily to blame.

Similar feelings are identified in the “Anti-Elites” group:

This group of Trump supporters leans economically progressive, believes the economic and political systems are rigged, and takes relatively more moderate positions on immigration, race, and American identity than American Preservationists. They are also the most likely group to favor political compromise.

Anti-Elites have relatively cooler feelings toward Donald Trump than American Preservationists, and nearly half had favorable opinions of Clinton in 2012. This group shifted most dramatically, however, against Clinton by November 2016. They were the least likely group to mobilize in the Republican primary, but of those who did, they disproportionately turned out for John Kasich.

Candidate Clinton’s elitist rhetoric throughout the campaign, as well as her perceived entitlement to the office of the President of the United States, will have no doubt turned many of these voters away. 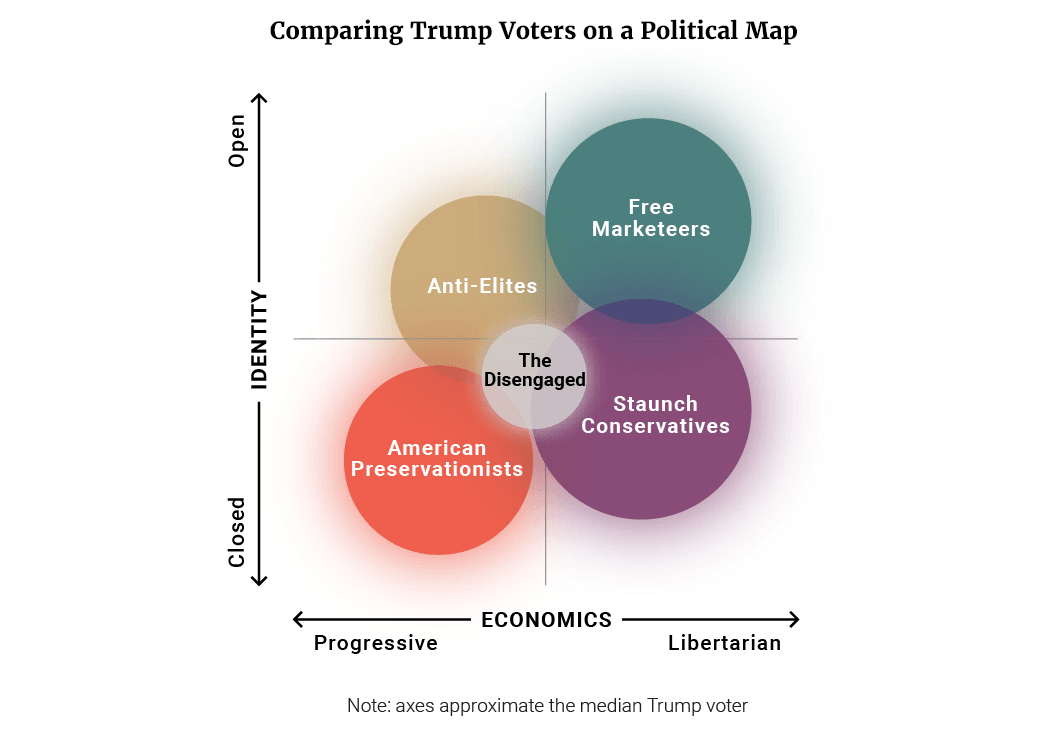 This Trump coalition, constituted from voters right across the political spectrum, is also why President Trump has such an uphill task in office keeping all sides happy, especially on matters such as healthcare.

The study also reveals how media types and political analysts still perhaps fail to understand what happened in November 2016. Slate’s chief political correspondent Jamelle Bouie wrote after the election: “There’s No Such Thing as a Good Trump Voter” with the standfirst of the article reading: “People voted for a racist who promised racist outcomes. They don’t deserve your empathy”.

In stating such things, analysts effectively demand U.S. politics should ignore the diversity of people who elected President Trump.

It also ignores that only one of these “flavours” of Trump voter have strong feelings on race. 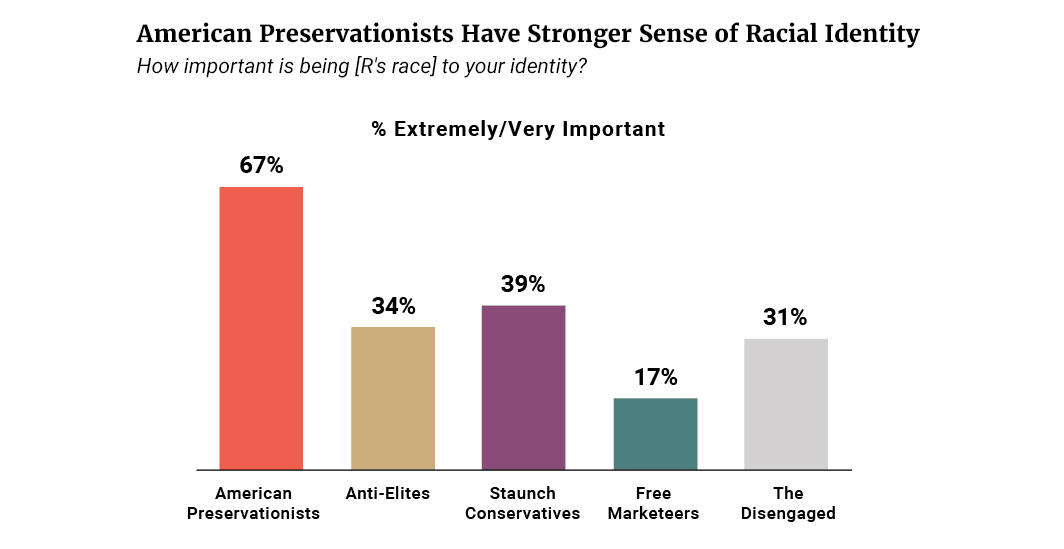 When Mrs. Clinton took to a glitzy, New York City fundraiser and railed against “the racist, sexist, homophobic, xenophobic, Islamophobic” deplorables, she wasn’t just disenfranchising the preservationists, but also the anti-elites and disengaged who would have respectively viewed her as increasingly out of touch, and also blaming them for something they simply didn’t recognise in themselves — because they didn’t feel that way about race.

Indeed most respondents answered affirmatively to the idea that being an American is about accepting people of diverse religious and racial backgrounds. 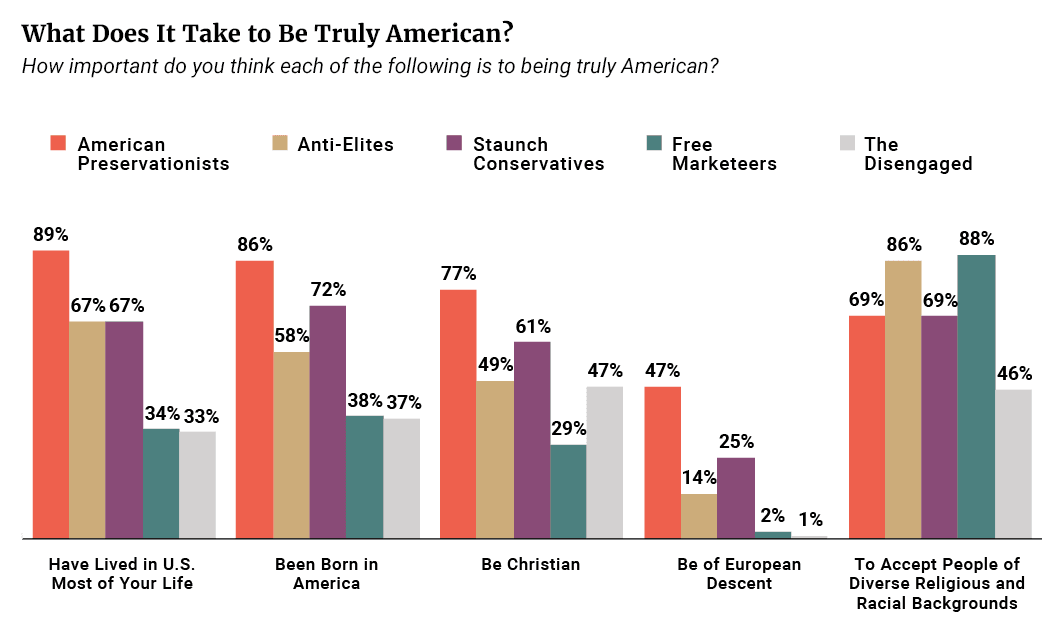 The Democrats may have signed their own electoral death warrant when stacking the nomination in favour of Hillary Clinton, given that American Preservationists and the Anti-Elites are more Democratic-friendly, and considering:

While 78 percent [of Anti-Elites] have an unfavorable view of Clinton today, only 47 percent felt similarly toward Obama in 2012. Had a Democrat other than Clinton been on the ticket in 2016, Anti-Elites may have split their votes for him or her over Trump. Next to Trump, Anti-Elites were most likely to have voted for John Kasich (22 percent) in the early primaries.

The stark shift away from feeling favourable about Mrs. Clinton can perhaps be explained by the marked policy shifts she made over the period from 2012-16, as well as the number of botched events as Secretary of State, and scandals including Benghazi that she was either partly or wholly blamed for. 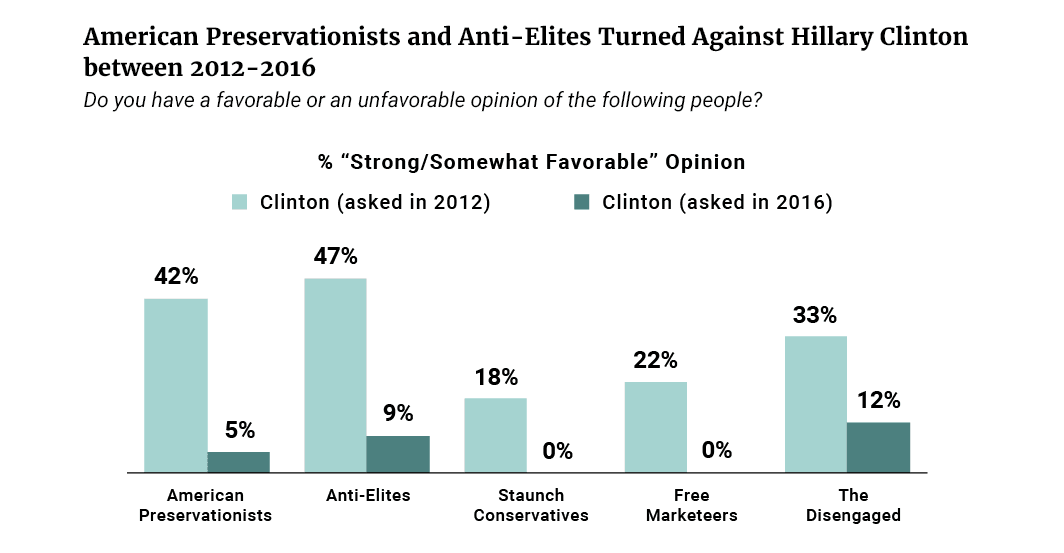 In 2015 the Washington Post noted Mrs. Clinton had a “flip flop” problem, especially on issues important to the Trump coalition voters, including trade, same-sex marriage, and Black Lives Matter.

The bad news for Bernie Sanders supporters tempted to say “I told you so” over Mrs. Clinton’s nomination is just 16 per cent of them say they would have voted for Bernie over Trump. This, however, cannot account for how the respective two campaigns might have progressed, and how the televised debates would have gone, had the Democrats chosen Bernie.

Immigration concerns, of course, are a commonality across the Trump-supporting groups, with the disengaged voters stating they do not necessarily know what the answers are, but with all groups being broadly supportive of President Trump’s temporary travel ban. 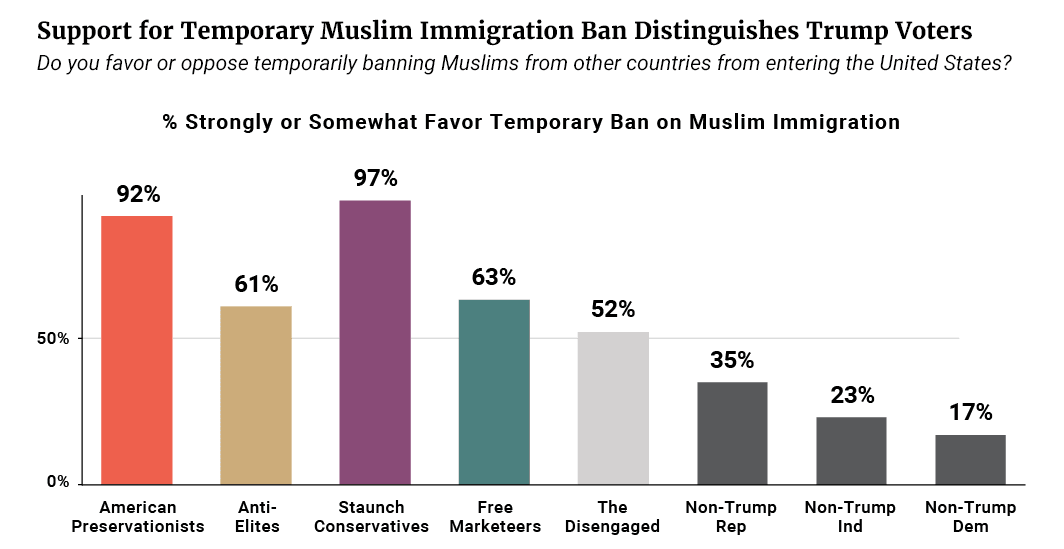 Emily Ekins, the author of the study, research fellow and director of public polling at the CATO Institute concludes:

In sum, evaluations of the economy, attitudes toward Clinton, illegal immigration, and Muslim immigration—but not immigration across the board—largely distinguish the Trump voters from non-Trump voters. Nevertheless, the five Trump clusters identified here still vary considerably even on these topics. Further, they diverge on a wide variety of today’s salient issues including on taxes, entitlements, immigration, race, pluralism, traditionalism, and social conservatism. This degree of heterogeneity among the Trump voters makes it difficult to speak about their values, priorities, and opinions as a group.

Thus, discussions of the 2016 election and the phenomenon that catapulted an unlikely candidate to the Oval Office should acknowledge that different types of people came to vote for Trump and not all for the same reasons.

Raheem Kassam is the author of the forthcoming book ‘No Go Zones: How Sharia Law Is Coming to a Neighborhood Near You’. Sign up for updates here.