A sailing expedition to the North Pole to raise awareness of global warming has been forced to turn back, 590 nautical miles short of its destination, after the yachts found their passage blocked by large quantities of an unexpected frozen white substance.

A meeting of the four skippers was held led by Erik de Jong, with Pen Hadow present, and it was agreed further northward progress would increase considerably the risks to the expedition, with very limited scientific reward. The decision to head south, back to an area of less concentrated sea ice in the vicinity of 79 degrees 30 minutes North, was made at 18.30 (Alaskan time).

Concentrated sea ice? In the Arctic Circle? Whoever would have imagined?

As usual, on these occasions, the expedition leaders are covering their embarrassment by billing their failure as a great success.

It is believed Arctic Mission has sailed further north from the coastlines surrounding the Arctic Ocean than any vessel in history without icebreaker support.

Well maybe. But that wasn’t the original point of the expedition when it was announced in the Sunday Times earlier this summer:

It is a polar record Pen Hadow wishes were impossible to achieve. The explorer, who was the first person to walk solo across the pack ice from Canada to the North Pole in 2003, will now try to highlight climate change by becoming the first to sail there in a yacht.

Hadow, 55, said it would be a bittersweet achievement to achieve the feat because it would mean that the polar ice cap had shrunk to record lows. “I’m very conflicted,” he said. “If we do reach the North Pole by sail, I think the image would be iconic for the rest of the century and a call to action,” he said. “If 50ft yachts can do this, imagine what commercial shipping can do.”

This is not the first time Hadow has been denied the “bittersweet achievement” of pinning Arctic melt on “climate change.” In 2009 – with encouragement from the Prince of Wales – Hadow led the Catlin Arctic Survey expedition which had to be cancelled less than half way into its 800 mile trek because the equipment broke in the freezing temperatures.

His latest failure comes a year after yet another sailing expedition – this one called The Polar Ocean Challenge, led by veteran explorer David Hempleman-Adams – was also frustrated by unexpectedly large quantities of ice.

That was Ship of Fools II.

Ship of Fools I was, of course, the glorious December 2013 expedition to Antarctica – led by an Australian alarmist called Chris Turney, one of the correspondents in the Climategate scandal  – which had to be called off after becoming stuck in ice which Turney insisted could not have been predicted.

Then earlier this summer, we learned of Ship of Fools III – a Canadian research expedition which had to be cancelled because, you guessed it, of “unprecedented” summer sea ice.

Why are these hapless fools such suckers for punishment?

Short answer: because that’s where the money is.

The Arctic is a mightily beautiful place to visit – as I once saw myself on a 300-mile trip on a skidoo round Svalbard – but it has been pretty well explored. So the only way these days you’re going to get sponsors to stump up for your icebergs ‘n’ polar bears jolly is if you can persuade them it’s all about “raising awareness” and “saving the planet.”

Rapacious corporations love to soften their image by having it associated with cuddly, caring green projects – especially if it accords with their business model. Insurance companies like Catlin – which sponsored Hadow’s previous expedition – for example have a strong vested interest in bigging up the climate threat because then they can persuade more clients to insure against the weather disasters which, supposedly, will become more likely as the planet heats up due to man’s selfishness, greed and refusal to amend his lifestyle…

The other problem, of course, is misreporting in the mainstream media which for years has been quoting “experts” assuring us of the Arctic ice’s imminent disappearance.

Meanwhile, in the real world, Arctic ice is stubbornly refusing to follow the alarmists’ doomsday narrative.

In Greenland, for example, the ice sheet since last September has grown at close to record rates. 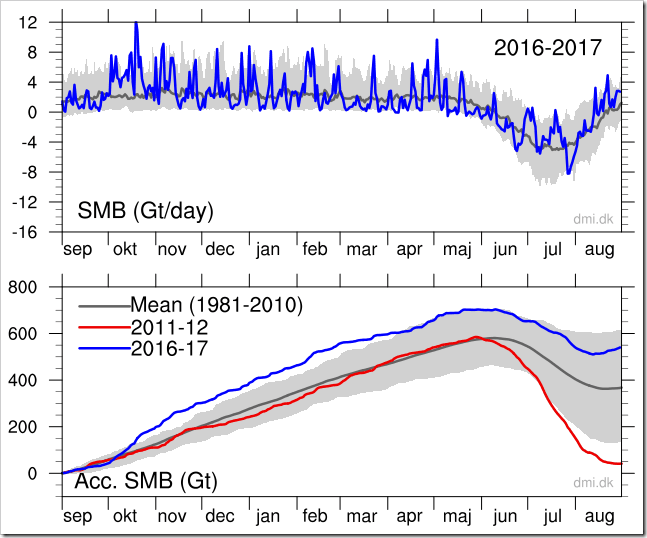 As Tony Heller notes – using the latest data from National Snow and Ice Data Center – it looks as though there are never going to be any of those “ice free summers” the alarmists promised us. 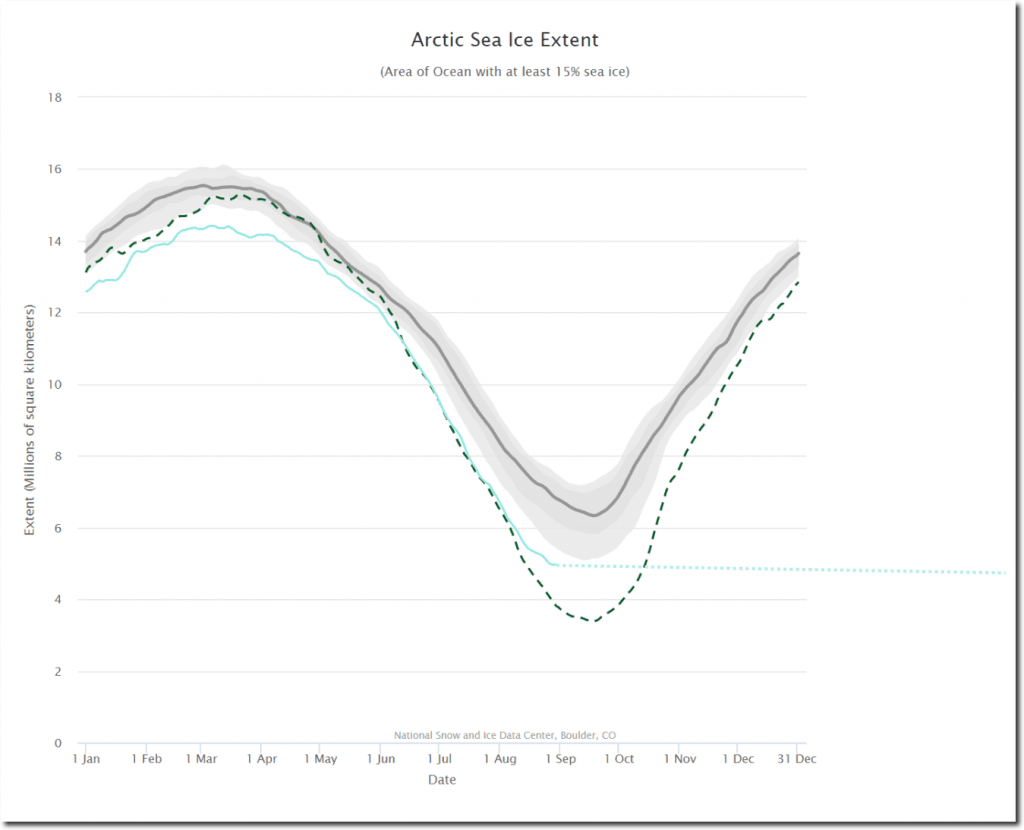 This is both good news and bad news.

It’s bad news for the mainstream media and especially for Environment Correspondents. Their opportunities for writing stories about the dread plight of the Arctic – and embarking on fun freebies to experience it at first hand – are likely to diminish with each passing year. Soon, it’s quite possible, green hacktivists will have forgotten what it’s like to see the Aurora Borealis from the deck of a Munich Re sponsored research vessel or to hear kittiwakes mewling over the bluey-white ice floes at midnight when it’s still as bright as day or the ratta-tat-tat on their keyboards as they bash out yet another thousand words on the vanishing polar bear. They might not even have jobs which enable them to make the most of their 2.2 in Whale-Watching, Bunny-Hugging and Misanthropy from the University of Easy Access: they might have to get one more suited to their talents, like picking up empty bottles for Greenpeace at pop festivals.

It’s good news for us, though. Me especially. I don’t even have to go looking for stories, like journalists used to have to do in the old days. They just sail right past my nose like this latest dumb-assed Arctic failure expedition just did. I open us all a big bag of popcorn and write it up for Breitbart for our amusement and delectation. And it’s not even as though I’m going to get any competition. About the only people covering this stuff are skeptical bloggers. Most of the mainstream media are looking away, pretending it’s not happening, because it just doesn’t suit their alarmist narrative.