Islamic State supporters have united with their natural allies on the regressive left to celebrate the destructive power of Hurricane Irma on the Great Satan and its wicked, climate-denying president Donald Trump.

Here are some screenshots of ISIS-supporting sites, provided by jihadist monitor MEMRI. 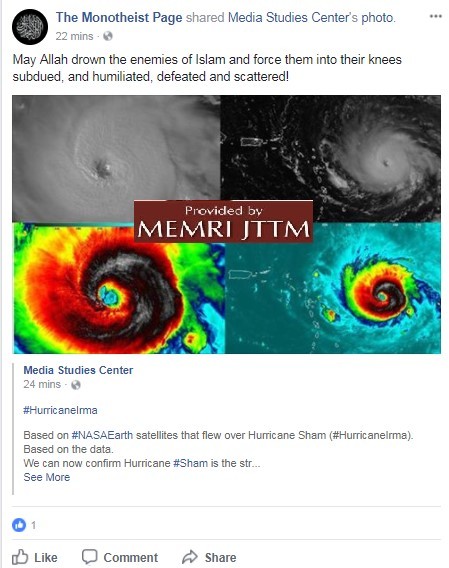 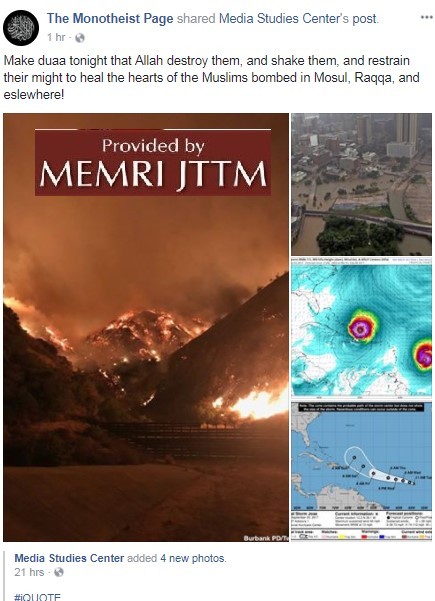 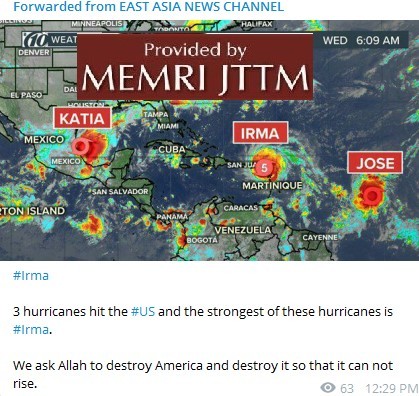 Though Islamists and progressives differ as to the cause of hurricanes – one side ascribes them to Allah, the other to Donald Trump and man’s selfishness, greed and refusal to amend his carbon-guzzling lifestyle – they are both unanimous that the damage being done is good thing.

Hurricane Irma: Please spare everyone & everything in Florida except Mar-a-Lago. The man who owns it is a bad person & is tearing us apart. pic.twitter.com/4lWIUOXJDw

Hey @realDonaldTrump, this would be a great weekend to stay at Mar-a-Lago. Don't mind that Irma stuff, it's all fake news.

We the people offer #Irma the fine seaside resort of Mar a Lago in atonement for our sins against the climate. Please take it and go.

This happy meeting of minds between liberals and Islamic terrorists on the subject of climate change dates at least as far back as 2010, when Osama Bin Laden released some tapes revealing himself to be very concerned about the threat posed by ManBearPig. (Airplanes falling from the sky and killing hundreds of innocents in their workplace – not so much).

“Speaking about climate change is not a matter of intellectual luxury — the phenomenon is an actual fact,” the tape says according to al-Jazeera. “All of the industrialized countries, especially the big ones, bear responsibility for the global warming crisis.”

Though the liberal media tried to play these tapes down, even to the point of questioning their authenticity, letters seized in the 2011 raid on his hideout in Pakistan confirmed that Osama Bin Laden was something of a climate change fanatic.

In a separate letter, bin Laden urged a close aide to launch a media campaign for the 10th anniversary of the Sept. 11, 2001, attacks that included a call for cutting greenhouse gas emissions.

Bin Laden contended that the world would be better off fighting climate change than waging what he claimed was a war against Islam.

“…the world should put its efforts into attempting to reduce the release of gases,” said the undated, unsigned letter to someone identified as Shaykh Mahmud that U.S. intelligence officials said they believed was written by bin Laden.

“This is a struggle between two of the largest cultures on Earth, and it is in the shadow of catastrophic climate conditions.” 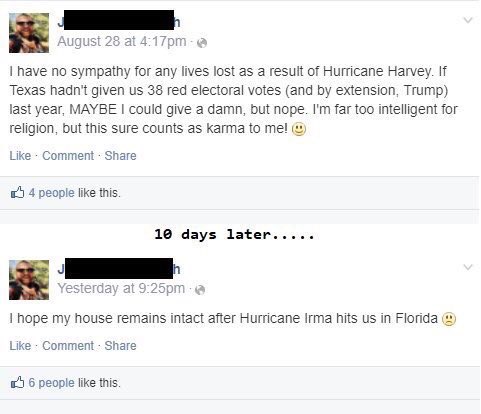