Grass-roots campaigners are warning GOP legislators to oppose any amnesty in the pending Christmas budget battles.

“The mere fact that there is a conversation about a deal on amnesty … is an affront,” said Bill Gheen, founder of Americans for Legal Immigration PAC, or ALIPAC, which helped block amnesties sought by President George W Bush in 2006 and 2007. Before the 2016 election, he said, “we were promised [by Donald Trump] this would not happen. We were promised strong immigration enforcement for years to come before any discussions about remaining illegal immigrants.”

“If they do the wrong thing on this, I think there is a very real risk the Republicans lose the House, and that means both [Republican] House members and Senators will suffer,” said Rosemary Jenks, the government affairs manager for NumbersUSA. She continued:

This is clearly a huge issue for Americans – it is why they elected Donald Trump — and unless House and Senate Republicans realize that, it is very dangerous terrain ahead for them. Think about the optics – – they failed on Obamacare, they failed on tax reform, but they pass an amnesty?

Trump cannot make a deal with the establishment because any deal will be violated by Democrats and their allied judges, said Ed Hunter, a GOP activist who runs the Overpasses for America branch in Maryland. “They will work  to convert [an amnesty for] 800,000 to 40 million,” he said, adding a warning:

If you betray us on this, it is over. [Conservatives] will never vote for Trump again because this was his freaking promise in every rally — no amnesties, build the wall, make America great again.

The grassroots pressure is rising as GOP Senators debate whether or not to combine an ambitious reform of the immigration system with a painful amnesty for some or all younger illegals, ranging in numbers from 690,000 to 3.3 million.

Trump released his immigration principles on October 8, which include an offer to accept an amnesty of some scale in exchange for ending chain-migration and the visa lottery. Both of those immigration rules allow immigrants to get green cards for their extended relatives, regardless of their skills, ideology or ability to assimilate.

Democrats are also contemptuous of the GOP’s inability to shape the immigration debate. On November 7, for example, Democratic leader Chuck Schumer predicted he will get Trump to sign an amnesty bill by using a few Republicans to get the amnesty into the end-of-year budget bill. “He won’t veto the bill,” Schumer said. “If DACA is in the omnibus, he will not veto it, is my prediction.”

For the moment, influential GOP Senators say they oppose a Christmastime amnesty. “The president made it very clear that he doesn’t want to see any DACA legislation as part of a year-end package,” Georgia Sen. David Perdue, told the media after the Senators met with Trump on November 2. Perdue is a co-author of the Trump-backed RAISE bill, which would raise Americans’ wages by ending the chain-migration inflow of new workers.

“This is not going to be part of the year-end omnibus or CR,” said Texas Sen. John Cornyn. The “CR” is Congress-speak for an end-of-year budget package.

GOP Senate Leader Sen. Mitch McConnell also dismissed the Democrats’ chance of passing a no-strings amnesty, saying that any bill would have to include offsets and safeguards. “I think there ought to be something related to making the American legal immigration system better, achieved along with DACA,” he said November 4, according to Politico. He continued:

It could be border security. It could be ending chain migration. It could be the diversity quotas. But something that tangibly improves the legal immigration system in this country, I think, ought to be attached to DACA.

But that vague list ranges ranging from token ‘border security” measures up to fundamental changes in the chain-migration system which has allowed Democrats to convert California, Virginia and other states into Democratic bastions. And his list also fails to include the most effective prophylactic against illegal immigration — the E-Verify law which penalizes companies who do not exclude illegal immigrants from hiring programs.

House GOP leaders have formed a task force to develop immigration legislation. But House Speaker Paul Ryan won’t say whether he will try to help Americans with a bill opposed by Democrats and business, or just slide by with a cheap-labor bill favored by business and Democratic pressure groups.

The GOP’s divisions and its record of support for mass immigration of Democratic voters have also bled out any trust among the GOP-voting activists.

A deal is impossible, said Hunter, because “you’re not going to get anything in return.” Trump should use his presidential powers to enforce the immigration laws, repatriate illegals and direct government agencies — such as the Corps of Engineers — to build the border wall. “We need to start playing hardball,” he said.

He and his group bypass the establishment and messages on overpasses over busy highways. 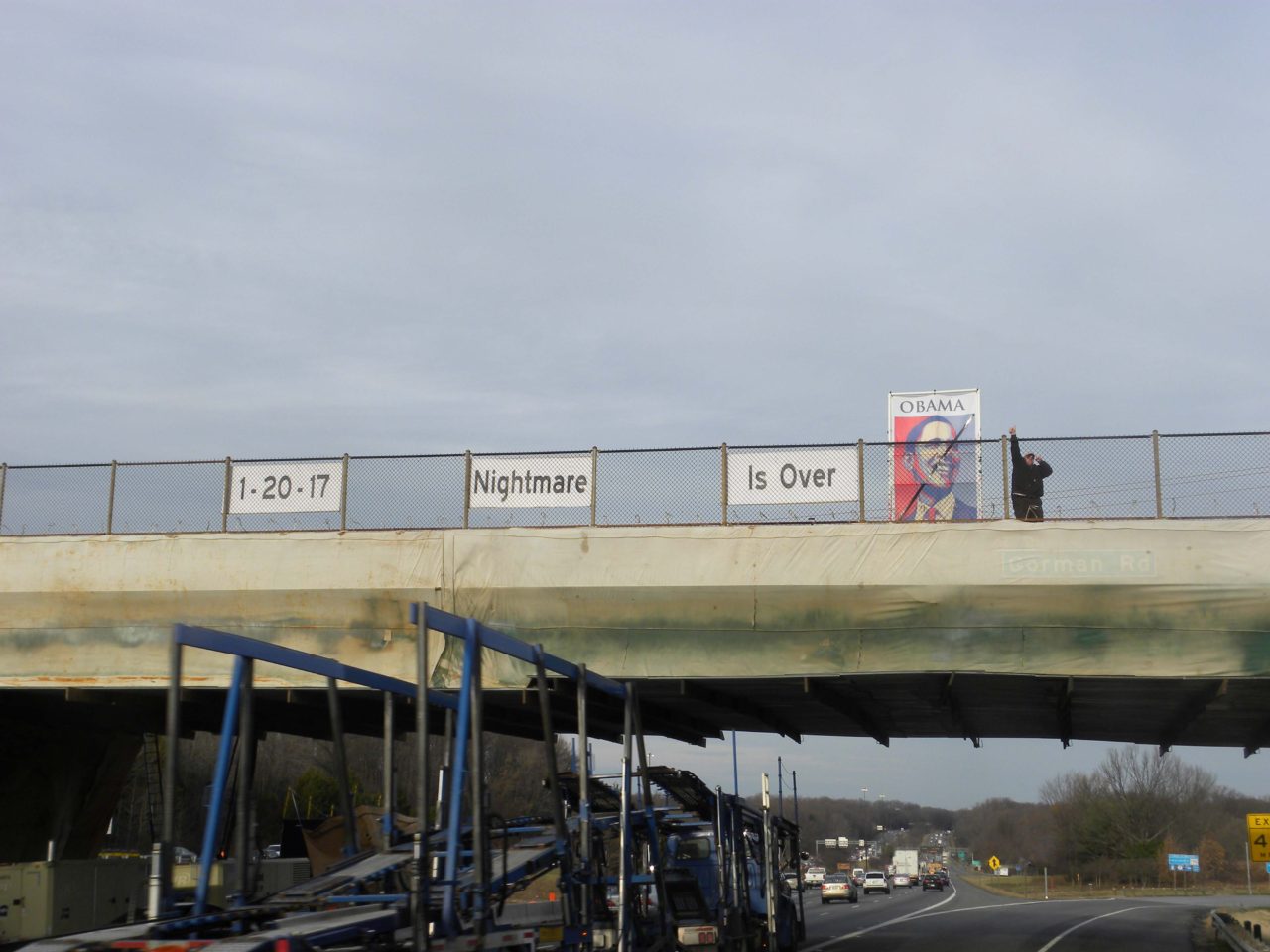 Any deal will be “a complete bait-and-switch,” said Gheen, adding:

Our backs are against the wall – we are already on the verge of being overrun by 20 million people illegally here. We are not going to concede one inch to this invasion or the people who are supporting it … The populists will see [an amnesty] as another surrender and sellout. Stop negotiating with those people … just enforce the law.

If the GOP blocks the Democrats’ Christmas amnesty, the legislators won’t push an amnesty deal in 2018 because of the primaries and the 2018 elections, said Gheen, who group has large influence despite recurrent problems with Facebook postings and links.

“We are ready and prepared to blow up any deal that is not good for America and Americans,” said Jenks at NumbersUSA, wihch claims 8 million members. She continued:

We will work with members of Congress, letting some of them know that there may be a way to do this — but it has to [end] chain migration and [require] E-Verify. I  think that Trump actually had a pretty major impact on the Senators he talked to, and they are actually talking about chain migration … but the House is not there yet …

There are two straightforward simple measures that will dramatically change and improve our immigration system — No. 1 is geting rid of chain migration [because] we should not have a self-selected, extended family immigration system … [and] No. 2 is E-Verify, which will have a bigger impact on illegal immigration than any other piece of legislation. Those two should be the minimum if anyone is serious about responding to the demands of American people. These are unbelievably popular issues, so there is no excuse for these two things to not be the absolute minimum.

To move the ball forward, she said, “the thing we really, really need is for Trump to say I will veto any bill that does not have X, Y and Z.”