Keeping in step with decades of White House tradition, President Donald Trump duly pardoned “Drumstick” the turkey on Tuesday, but two of his esteemed predecessors were less interested in symbolic animal reprieves. They ate their turkeys instead.

Joking that he could not overturn President Obama’s pardon last year of “Tater” and “Tot,” President Trump officially pardoned “Drumstick” and “Wishbone” on November 21 during a ceremony at the White House.

But, as Trump noted, not every president has been so magnanimous toward their Thanksgiving Day turkeys.

The first two presidents who were officially presented with a Thanksgiving Day turkey, Harry S. Truman and Dwight David Eisenhower, were quite pleased to eat their birds, according to historical records.

Records show that many presidents were gifted with turkeys while in office, but the first official Thanksgiving turkey donation to the White House occurred in 1947, during President Truman’s first term in office as he served out Franklin Roosevelt’s unexpired fourth term. According to the Truman Presidential Library, records show that Truman was present when at least one of the birds gifted to the White House was served at Thanksgiving dinner.

The library also says that there was some consternation over the whole situation at the time because Americans were being encouraged to observe “Meatless Tuesday” and “Poultryless Thursdays.” Truman hoped such measures would conserve U.S. grain for distribution as foreign aid to a war-ravaged Europe still recovering from World War Two. But with Thanksgiving landing on Thursday, the National Poultry and Egg Board was none too happy to have the nation skip their Thanksgiving turkey. Soon a lobbying effort was launched to save Thanksgiving dinner from “Poultryless Thursdays.” The gift of the turkey to Truman by the Poultry and Egg National Board and the National Turkey Federation signaled a truce, as Americans were given dispensation from the voluntary restrictions so they could enjoy the holidays.

The next time any notice was paid to the turkey donation was when Dwight D. Eisenhower had taken up residence in the White House. According to the Eisenhower Presidential Library, Ike ate every single turkey donated to the White House during his two terms in office. Apparently, the man who led the Allied forces to victory over Hitler saw no reason to indulge in sentimentality over turkeys when the dinner plate called.

Indeed, the first president to acquit the turkey was John F. Kennedy, who decided to spare the bird donated to his White House in 1963.

Just four days before an assassin’s bullet ended his life, Kennedy returned his donated gobbler back to the farm, saying, “We’ll let this one grow.” While no one in the White House referred to the act as a “pardon,” some newspapers at the time used the term in jocular stories of the bird’s fate. 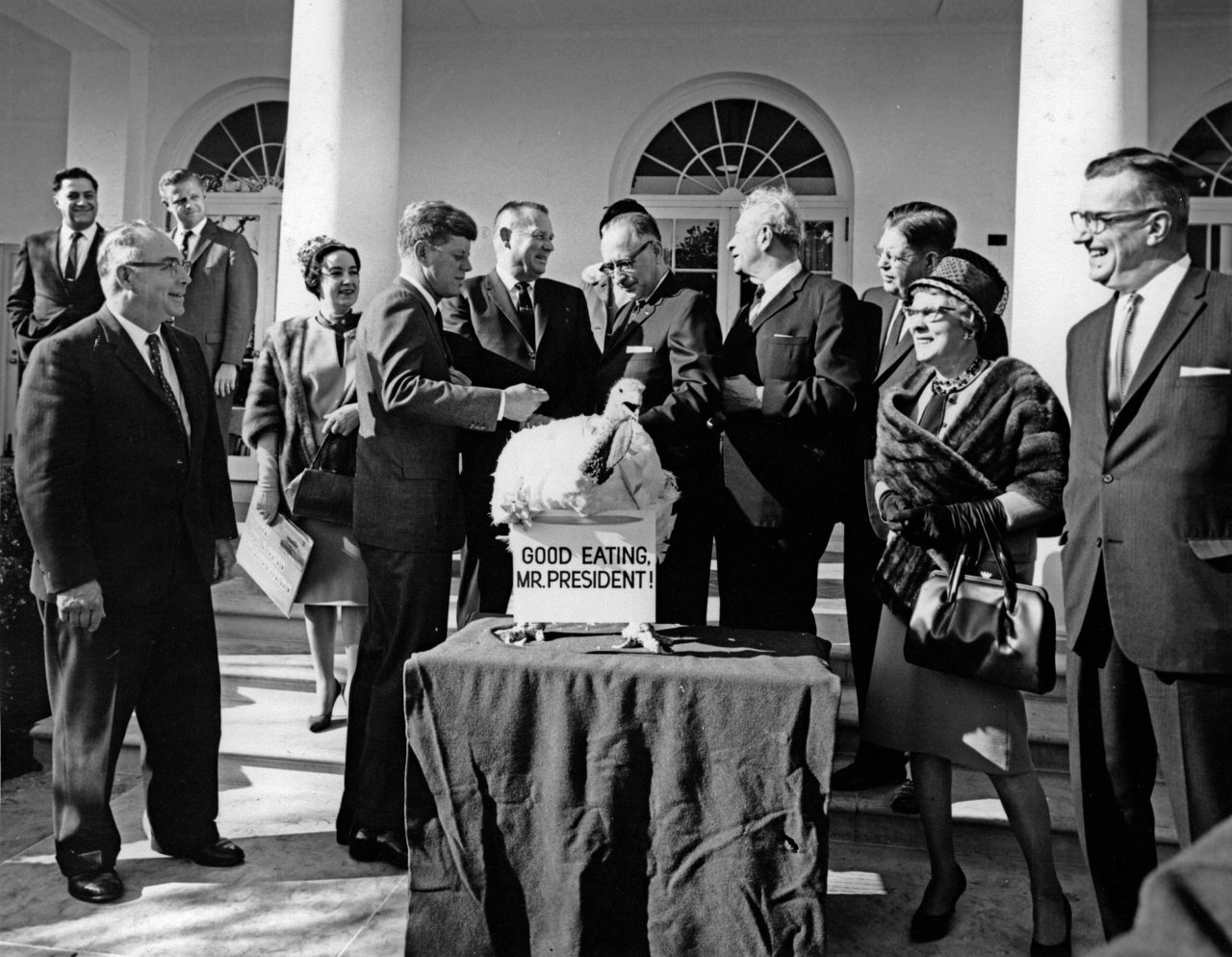 President John F. Kennedy spares the turkey presented to him in 1963, only three days before his assassination. (Wikimedia Commons)

Every president since Kennedy followed his lead.

Richard Nixon emulated Kennedy’s magnanimous gesture and similarly returned his turkeys to the farm. But the first president to formally use the term “pardon” to characterize his sparing of the Thanksgiving turkey was Ronald Reagan who returned Charlie the turkey to the farm in 1987.

Perhaps unsurprisingly, Reagan issued his “pardon” to Charlie as a needle to the media. At the time his administration was under pressure from the press over the Iran-Contra Affair with journalists badgering him as to whether or not he would pardon Oliver North, a man from whom Congress was keen to hear testimony. Still, Reagan did not pardon any turkey other than Charlie during his presidency. 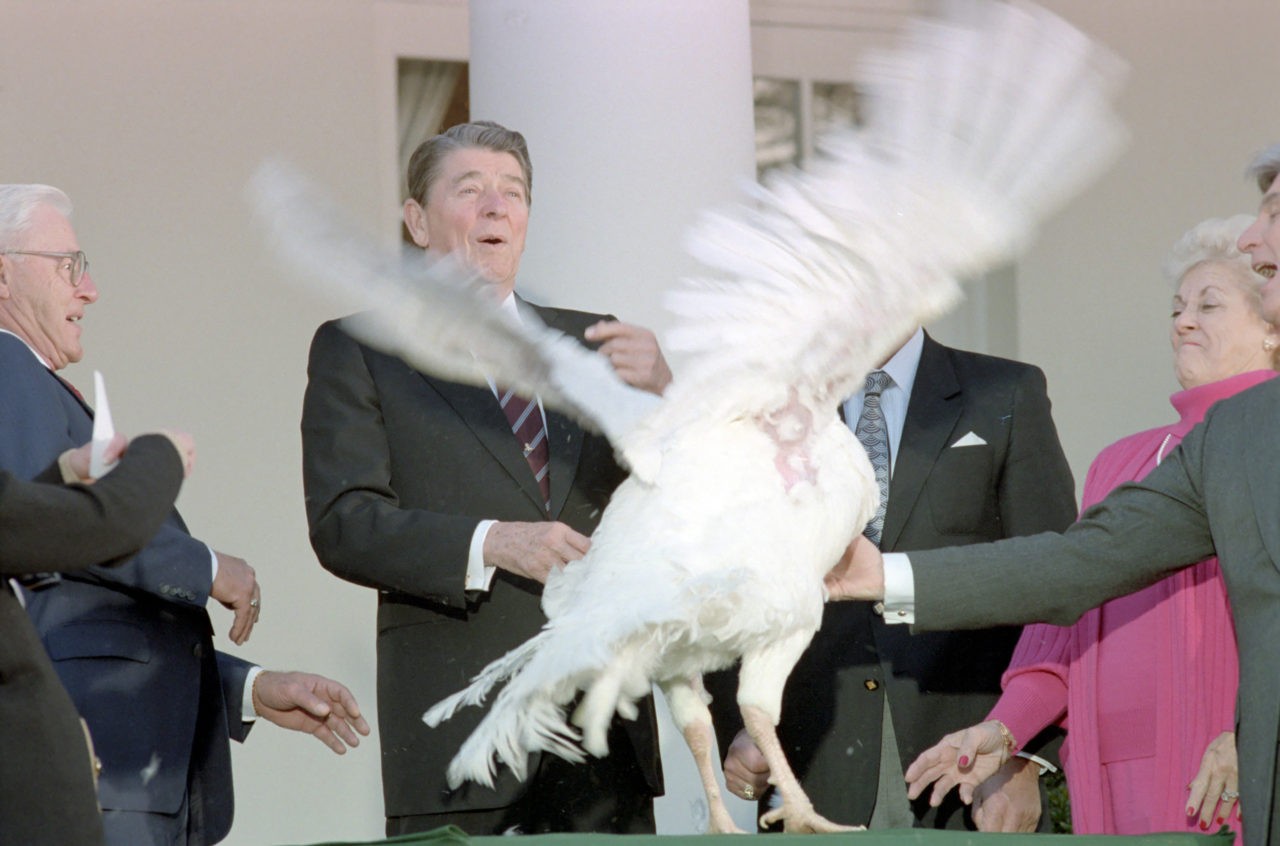 Finally, Reagan’s successor, George H.W. Bush, made pardoning the turkey an official part of the White House schedule during Thanksgiving week, and it has stayed a tradition ever since.