The slippery snake oil salesman and rent-seeker extraordinaire has been down to South Australia – now reduced, pretty much, to a third world state under its disastrous left-wing administration – and conned the hapless locals out of $50 million to build them an all-but-useless giant battery to make up for the energy they have lost by blowing up their coal-fired power station and relying on wind power instead.

And how are the lickspittle media reporting this outrageous scam?

Tesla Fulfilled Its 100-Day Australia Battery Bet. What’s That Mean for the Industry?

With a media as compliant and unquestioning as this, is it any wonder Tesla’s price is still about $300 higher than it should be and that governments continue to spend taxpayers’ billions bankrolling his quixotic schemes?

Let’s just have a quick reality check here, shall we?

A bet is where you risk a sum of money on a chance event on whose outcome you are uncertain. Musk knew perfectly well he was going to get his giant battery plant finished in time. Otherwise he wouldn’t have made his “bet”. Musk did not get to be worth nearly $20 billion taking $50 million gambles – even if it is true that when you’re as rich as him $50 million counts as small change. No, he got rich at least in part thanks to his remarkable ability to talk the hind legs off a donkey.

In this case, he persuaded pretty much the entirety of the world’s media that when a businessman makes a deal in which a project has to be completed within a certain time frame this isn’t called “fulfilling your most basic job requirements” but “winning an incredible bet.”

Obvious Truth #2. South Australia needs Elon Musk and his giant battery like it needs a Taipan in the dunny.

That’s because, as Paul Homewood has been impolite enough to notice, the battery will make next to no difference to South Australia’s massive energy problem.

South Australia, you’ll recall, has been experiencing the kind of black outs and brown outs you’d never imagine could be possible in a first world economy in the early 21st century. These have been caused entirely by its left-wing government’s obsession with “green” energy.

Homewood does the math:

Currently generation in South Australia is running at 1878 MW, so the Tesla battery could only run the grid for 4 minutes.

Alternatively, according to Tesla, it could power 2500 homes for a whole day, or 15000 for four hours.

Given that there are 673,000 households in South Australia, the Tesla battery is an expensive irrelevance.

Australia, by the way, is a large island consisting underground of almost nothing but fossil fuels and other useful mineral deposits. The idea that it should be powering itself using bat-chomping, bird-slicing eco-crucifixes and then trying to store some of their excess power in lithium batteries quite defies belief.

Here, again courtesy of Paul Homewood, is the chart that puts this lunacy into perspective: 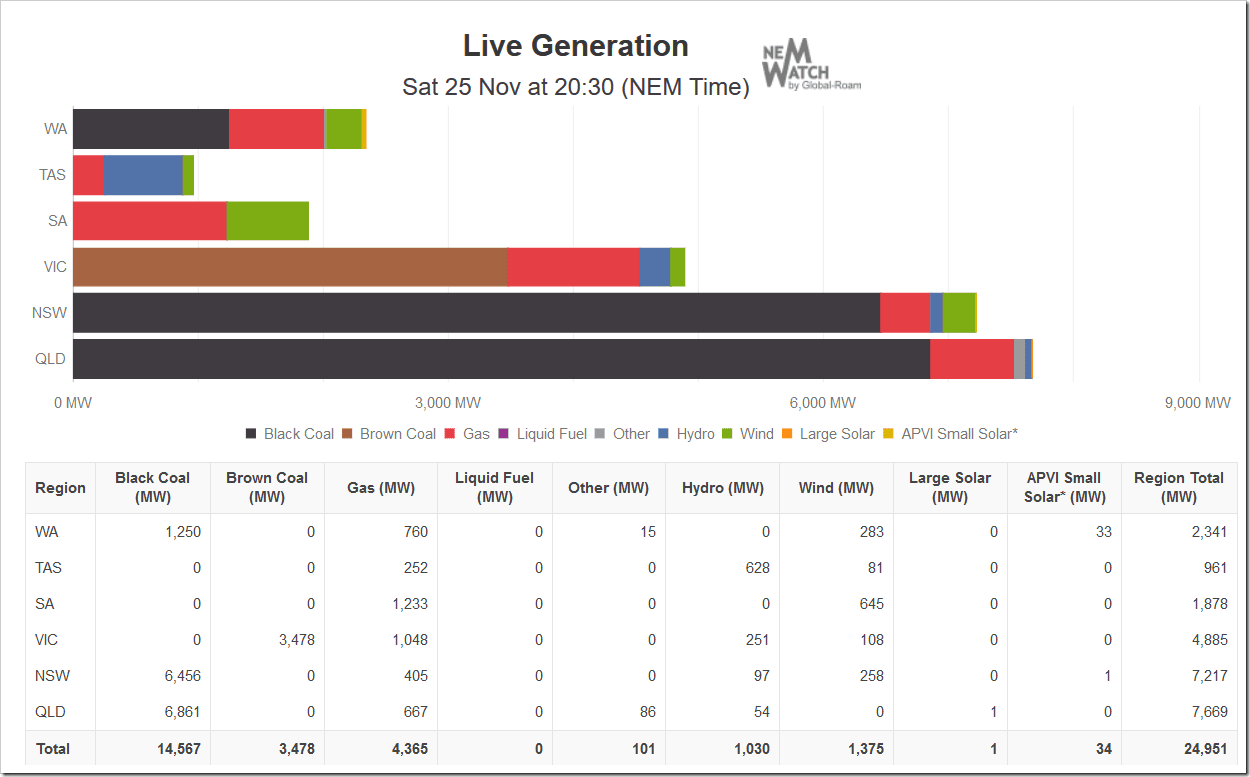 So if you’re Australian and you drive a Tesla there’s something you ought to know: you’re driving a mostly coal-powered vehicle.