President Trump’s most popular pro-American immigration reform, the system known as “E-Verify,” which would bar employers nationwide from hiring illegal aliens over Americans, was entirely left out of immigration discussions on Tuesday at the White House.

During a meeting between Trump, Republicans, and Democrats on the issue of giving amnesty to nearly 800,000 illegal aliens shielded from deportation by the President Obama-created Deferred Action for Childhood Arrivals (DACA) program, mandatory E-Verify was not mentioned once.

While Trump’s position seems to remain that he would be willing to give amnesty to DACA illegal aliens in exchange for reducing legal immigration levels to benefit Americans, ending the Diversity Visa Lottery program — which randomly gives out 50,000 visas every year to foreign nationals through a lottery system – and funding for the border wall, his popular mandate that employers use E-Verify to keep illegal aliens from taking jobs over Americans has been excluded from all immigration negotiations.

Mandatory E-Verify is easily the single most popular immigration reform with Americans. For example, a recent poll by Pulse Opinion Research found that nearly 60 percent of likely voters want mandatory E-Verify to be part of a deal on DACA, if a deal is made and finalized. 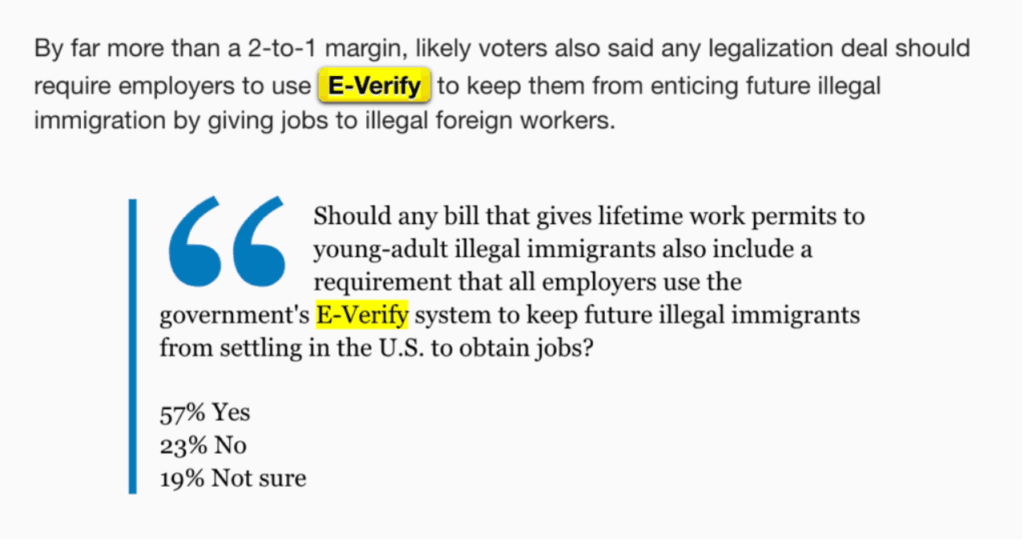 Months ago, when likely American voters were asked by Pulse Opinion Research if they supported mandatory E-Verify, a majority of 68 percent said yes. Another 71 percent of voters said businesses should be required to hire from pools of Americans with the highest unemployment rates before importing cheaper, foreign workers through various visa programs or hiring illegal aliens.

Pro-American immigration reformers have asked Trump to begin including mandatory E-Verify in his demands in a DACA amnesty deal. For instance, Kansas Secretary of State Kris Kobach has pleaded with Trump, saying E-Verify would be one of the only ways to help stem the massive border surge and illegal immigration levels that would likely come following a DACA amnesty.

.@KrisKobach1787: "Those 800,000 illegal aliens are in their 20’s and 30’s, they’re not kids. And they’re competing for jobs with Americans who in that age group are facing 9 percent unemployment, 19 percent under-employment." https://t.co/vQHpsPnHm1

Likewise, Andrew Good with NumbersUSA, a group that represents Americans’ interests in national immigration policy, wondered why mandatory E-Verify was not discussed as one of Trump’s requirements in order for his administration to sign off on an amnesty.

You've gotta hand it to our pols. They promised in 1986 they'd turn off the "jobs magnet" in return for amnesty. 32 yrs later, they're back for more amnesty! Now, finally, a system *exists* & is *fully operational* that stops illegal hiring. But it's NOT in negotiations? #EVerify https://t.co/7tfBhfFtSL

Mandatory E-Verify was touted as one of the most effective ways to deter illegal immigration and border-crossings at the southern border by the Trump administration in October 2017 when it released its 70-point list of pro-American immigration principles that would relieve America’s working and middle class of the immigration burden and raise wages for blue-collar Americans.

Yet, since the list was released and DACA amnesty discussions started at the end of 2017, mandatory E-Verify has not been touted by the Trump administration or even pro-American immigration reformers like Sen. Tom Cotton (R-AR) and Sen. David Perdue (R-GA).

A DACA amnesty would put more citizen children of illegal aliens — known as “anchor babies” — on federal welfare, as Breitbart News reported, while American taxpayers would be left with a $26 billion bill.

Additionally, about one in five DACA illegal aliens, after an amnesty, would end up on food stamps, while at least one in seven would go on Medicaid.

At the southern border, a DACA amnesty has the potential to trigger a border surge that could triple the number of illegal aliens pouring through the border.