The climate loons – and their amen corner in the liberal MSM – want you to panic about a new study claiming that sea level rise is accelerating.

‘Miami could be underwater in your kid’s lifetime,’ says USA Today.

At the current rate, the world’s oceans will be on average at least 60cm (2ft) higher by the end of the century, according to research published in Monday’s Proceedings of the National Academies of Sciences.

Based on 25 years of satellite data, however, the research shows that the pace has quickened. It confirms scientists’ computer simulations and is in line with predictions from the UN, which releases regular climate change reports.

“It’s a big deal” because the projected sea level rise is a conservative estimate and it is likely to be higher, said the lead author, Steve Nerem of the University of Colorado.

Don’t believe a word of it.

Or, as Paul Homewood puts it:

To call it junk science is being too generous.

You can read his full scientific explanation here.

I’ll give you the short version which is that – yet again – the doomsday scenario is based on computer modelled projections which, in turn, are based on false assumptions.

Here is one of them:

Nerem et al claim that if sea level continues to change at this rate and acceleration, sea-level rise by 2100 (∼65 cm) will be more than double the amount if the rate was constant at 3 mm/y.

This is clearly nonsensical and unscientific. There is not the slightest evidence that a slight acceleration measured over the last two decades will continue. Indeed, all of the past data shows that the rate accelerates and subsides regularly.

For sea levels to rise by 65cm by 2100 would mean an average annual rise of 7.8mm, three times the current rate.

If you accelerate your car from 0 to 60mph in 10 seconds, and assume that such acceleration will continue, it would not be long before you were driving at light speed. (My calculator says about 8 hours!)

As you can see clearly on this chart, sometimes sea level rise accelerates, sometimes it decelerates. 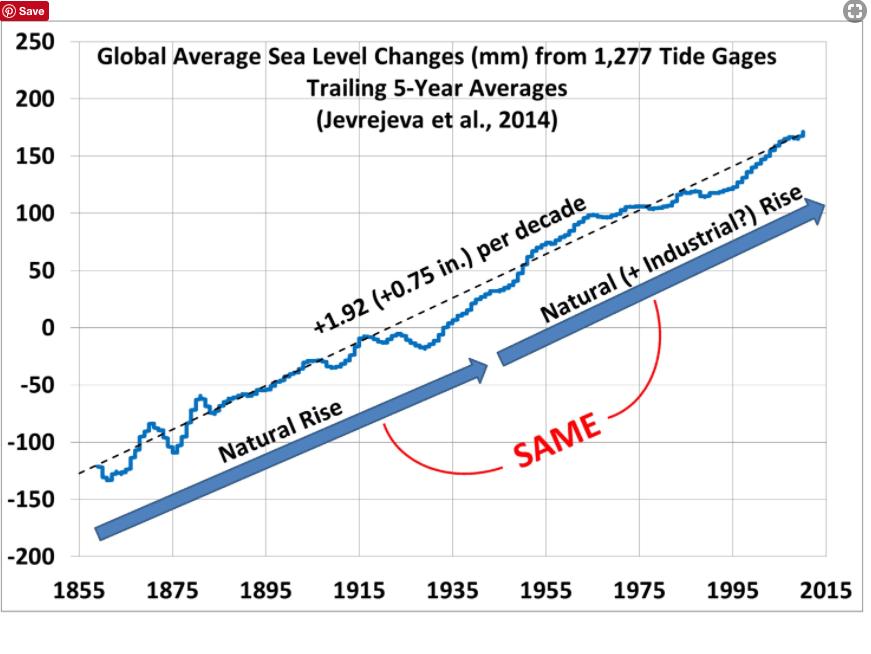 So why do so many people swallow this nonsense?

One reason is groupthink. For many people – liberals especially – believing wholeheartedly in the climate change narrative is a way of signalling to the world that they are virtuous and part of civilized society. To question the narrative is to reveal yourself as a heretic, an outcast. And no one wants to be one of those, do they?

Here is an example of that virtue-signalling in action. It’s from an article in Tallahassee Democrat by a journalist and bestselling author I used to like, Carl Hiaasen.

It’s headlined: ‘Hey, we can turn sea-level rise into a win-win, right?’

Hiaasen uses the sea-level rise scare-story as an excuse to have a go at Environmental Protection Agency chief Scott Pruitt for what he said recently about ‘global warming’.

An absolutely true news item: EPA chief Scott Pruitt told an interviewer that climate change might not be a bad thing, saying: “We know humans have most flourished during times of, what, warming trends. … Do we really know what the ideal surface temperature should be in the year 2100?”

Other muddled, unscientific thoughts that one can easily imagine Scott Pruitt saying someday:

“It’s always the same old tune from the know-it-all climate scientists, warning everyone that the oceans are rising as global temperatures heat up. And, sure, we’ve all seen those pictures of Miami Beach streets underwater at high tide.

“But to the good folks of Florida and all other coastal states, I would say: You can either wring your hands in wimpy despair, or seize the opportunity to do something bold and creative with your submerging shorelines.

“One day your beaches might be gone, but you can’t just give up on tourism — look at Venice, Italy, where they’ve been dealing with high water for centuries.

“Now, just imagine poling a gondola down Ocean Drive, or skim-boarding through the lobby of the Delano.

A couple of things jump out at you when you read Hiaasen’s effort.

First, it’s not funny. But then, that’s not really the main point. Like a lot of what passes for humor these days on the politically correct comedy circuit and elsewhere, the joke has more to do with reinforcing shared values than it does with speaking truth to power or making people laugh. It says: “This is how we, the righteous ones, think. Aren’t we just great? And aren’t the people who don’t share our point of view just worthless, deplorable idiots?”

Second: can it really be true that this guy used to be an investigative reporter on the Miami Herald where, presumably, his job included digging beneath the surface and, like, investigating stuff?

And shouldn’t it be one of the most basic, entry-level requirements of a job like that to take nothing for granted and to question everything?

If so, then why did Hiaason fail to consider even for one millisecond the possibility that the assumption underlying his entire ‘satirical’ screed might be flawed?

He describes as “muddled” and “unscientific” Scott Pruitt’s claim that “humans have most flourished during times of, what, warming trends” and Pruitt’s question “Do we really know what the ideal surface temperature should be in the year 2100?”

Yet there’s nothing muddled or unscientific about either statement.

The first is unimpeachably true: human civilization flourished during periods like the Minoan, Roman and Medieval Warmings and faltered during cooling periods.

And the second shows a far deeper understanding of the global warming debate than Hiaason is apparently capable of.

Not only does it raise several important political, scientific and philosophical points: “What is the ideal mean temperature for the globe? Who gets to decide? Is it really our job to make such decisions? How much should we spend to achieve this goal?”

But it’s also quietly – and quite rightly – skeptical of the very notion that there is such a thing as a global temperature control knob.

Scott Pruitt is quite right. There isn’t one.