The data tampering at National Oceanic and Atmospheric Administration (NOAA) is even worse than we thought: over the last century it has exaggerated “global warming” in the U.S. by as much as 2.5 degrees F.

In other words, pretty much the entirety of the 20th century warming in the U.S. “measured” by the world’s primary temperature record gatekeeper may be fake.

Tony Heller has the details:

NOAA’s US temperature record shows that US was warmest in the 1930’s and has generally cooled as CO2 has increased.  This wrecks greenhouse gas theory, so they “adjust” the data to make it look like the US is warming. 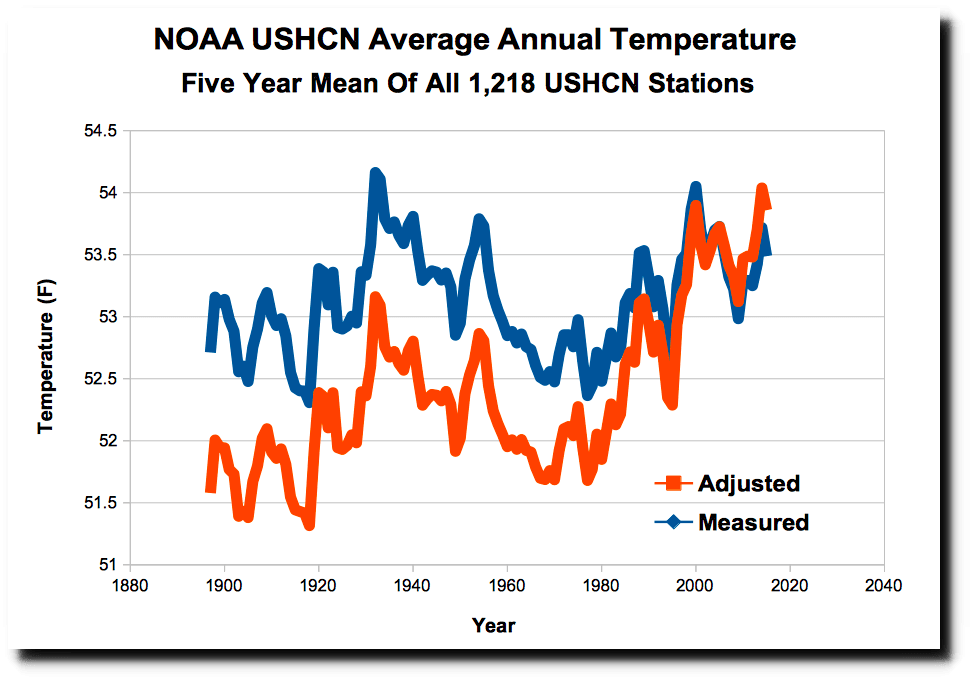 Note the blue actual measurements: not much warming.

The effect of all this data tampering is to produce a hockey stick shape not dissimilar to the one cooked up by the discredited Michael Mann.

The NOAA data tampering produces a spectacular hockey stick of scientific fraud, which becomes the basis of vast amounts of downstream junk climate science. Pre-2000 temperatures are progressively cooled, and post-2000 temperatures are warmed. This year has been a particularly spectacular episode of data tampering by NOAA, as they introduce nearly 2.5 degrees of fake warming since 1895. But surely a government-funded organization like NOAA, staffed by actual scientists with PhDs, can’t literally be making stuff up?

Oh yes it can.

Most of these adjustments are due to simply making up data.  Every month, a certain percentage of the 1,218 United States Historical Climatology Network (USHCN) stations fail to report their data, and the temperature gets estimated by NOAA using a computer model. Missing data is marked in the USHCN database with an “E” – meaning “estimated.” In 1970, about 10% of the data was missing, but that number has increased to almost 50%, meaning that almost half of the current adjusted data is fake.

Of course, just because nearly half the current adjusted data is “fabricated” – ie, in this case, estimated rather than physically measured by actual thermometers and then adjusted – doesn’t automatically mean it is inaccurate or misleading. Not necessarily…

But this brings us to the most damning part of Heller’s investigation. The adjusted temperature data may be pretty dodgy, but it turns out the fabricated data is as bent as a nine bob note. 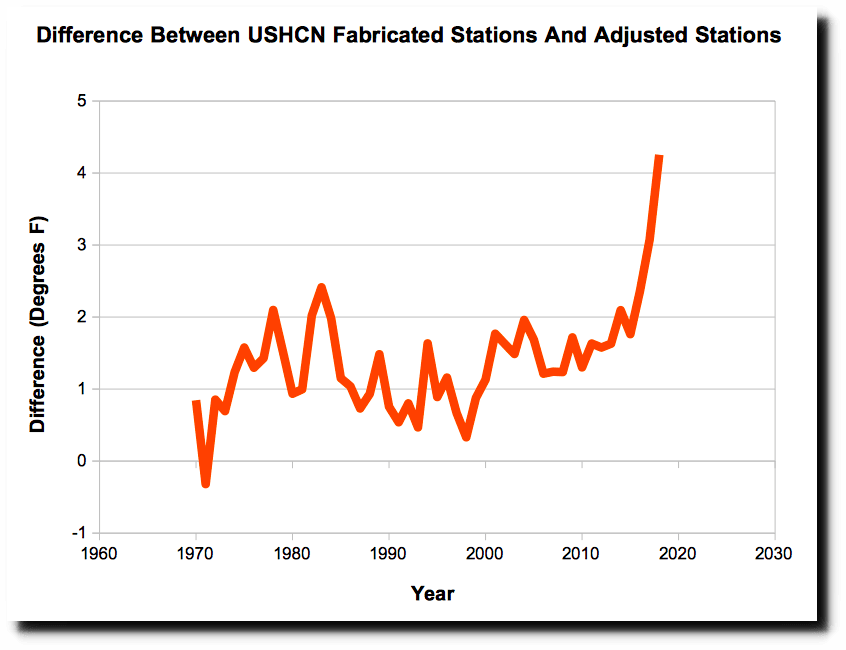 See how cavalier the NOAA gatekeepers have grown with the most recent data? The odd one or two degree embellishment here and there might be not be too noticeable. But four degrees? That’s just taking the mickey.

We know why they’re doing it too.

They’ve got these computer models which are programmed to tell us that as anthropogenic CO2 emissions rise so will global warming. But reality isn’t playing ball. So rather than correct their computer models, they’ve decided it’s much easier to adjust reality to match their increasingly threadbare-looking global warming theory. 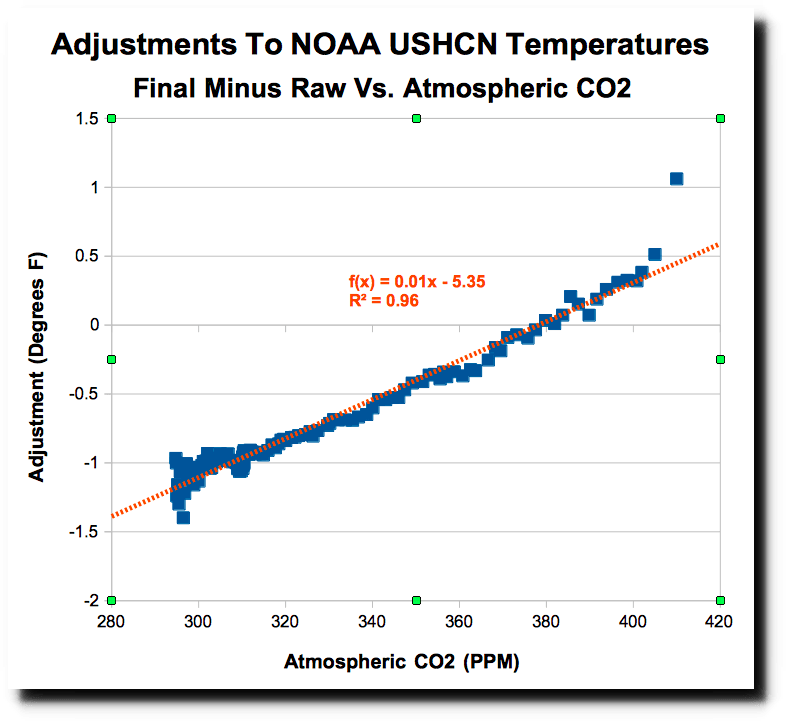 Science doesn’t get any worse than how NOAA handles US temperature data. NASA uses the NOAA data as the basis for their temperature graphs, which have also been massively altered to turn cooling into warming.

This cannot be stressed too often. One of the great lies told by climate alarmists is that the world’s various temperature gatekeepers operate independently of one another – and that the fact they have all reached the same conclusions is confirmation that they must be right. But they’re not independent of one another at all.

There are many problems with what NOAA is doing. The first is that they are turning an 80 year cooling trend into a warming trend, which has massive implications for both climate scientists, journalists, voters and policy makers who depend on the accuracy of their work. The second problem is that they release graphs with no annotation that the data has been altered – people assume that the data is representative of the thermometer record, and it isn’t. The third problem is that they are altering the data to match their theory, the exact opposite of how science necessarily must operate.  And the fourth problem is that the alterations are largely due to modeled data, generated in lieu of missing thermometer data – which they are losing at an alarming rate.  Almost half of NOAA’s monthly US temperature data is now fake. Their handling of data would make even Enron accountants blush.